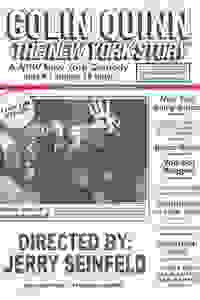 Based on his best-selling book, 'The Coloring Book,' Comedian Colin Quinn takes on the history of New York - his hometown - in this solo show, directed by Jerry Seinfeld.

In 'Colin Quinn The New York Story,' Colin bemoans the rise and fall of his hometown, the city formally known as New York, from its modest beginnings as a Dutch outpost, to the hipsters of modern Williamsburg, to the vermin below and above ground. Quinn employs satire to take aim at the prejudice, paranoias, and peculiarities that make New York City the crossroads of the world.

See it if you enjoy Quinn. CQ is more stand-up than of theater. The history is fun, the characters vivid. Still, some material seems misguided.

Don't see it if the idea that the old days were better bothers you. It was better for white men. The second half lags. I had fun, but it's not real theater.

Don't see it if you can't laugh at yourself.

See it if You want to hear a very cynical and very funny view of the way New York City has developed and changed.

Don't see it if You will be bothered by the fact that you're paying about $1 a minute to be there.

See it if you like one person shows, or comedians or Quinn himself. You should be interested in politics and probably liberal although not necessarily

Don't see it if you don't think Quinn is funny or if you don't like one person shows. The show is very political and also quite similar to his Netflix stuff

Don't see it if you hate collin quinn

See it if How can you not love Colin Quinn?

Don't see it if You don't like one man comedies.

See it if you enjoy semi-historically/ raically-based observational comedy, or Colin Quinn.

Don't see it if you are easily offended, have no ethnic background, or hate New York.

See it if you're a fan of intelligent, well-constructed comedy. Mr. Quinn's laid-back style creates a very intimate experience, serving the work well.

Don't see it if you are expecting loud, raunchy comedy. This is more of thinking man's stand up, jokes are clever and insightful. Truly a wonderful night.

"Just as theater is always dying, New York is perpetually over. Complaining about its demise, however, remains one of its wonderful traditions, and Colin Quinn, a comic alert to ritual, plants himself firmly in the middle of it in his new monologue, 'The New York Story,' a nostalgic lament that makes for a lovely summer evening."
Read more

"The raspy-voiced comedian delivers his distinctive combination of killer one-liners and astute observations. The evening has a well-honed seamlessness that, combined with the unified themes, raises the stand-up routine to satisfying theater. This is one 'New York Story' you want to hear."
Read more

"The subtext of Quinn's new show, is that we should celebrate our polyglot heritage and lose the politically correct tendency to squeeze everyone into the same mold. And if that means unearthing all the old stereotypical tropes we tried to bury, well, he’s got a million of them — and they’re all hysterically offensive."
Read more

"Quinn’s best solo show yet. So strong is the material that it doesn’t need the few flourishes devised by director Seinfeld. The topic is the comedian’s hometown — how its character was formed by wave after wave of ethnic groups. He smartly takes the edge off potentially sensitive material by filtering it through personal reminiscences."
Read more

"Today pickles can be artisanal, but people are generic. The same might be said of Quinn’s show. 'The New York Story' is an amusing enough diversion. But there’s nothing so unique about his version of the Big Apple saga."
Read more

"Quinn's musings are full of Seinfeld's brand of observational humor. Quinn has a chummy rapport and brings plenty of laughs, but..It's too bad he didn't delve deeper into New York culture, rather than just bring up stereotypes. That being said, Quinn has a remarkable ability to employ racial humor without being the slightest bit offensive."
Read more

"Deep in the heart of the West Village — there's an off-Broadway theater in which a small handful of people gather nightly to celebrate the Gotham of yesteryear. Their high priest is SNL alum Colin Quinn, whose latest standup show, 'The New York Story,' is half history lesson, half old-fashioned ethnic humor, and totally hilarious."
Read more