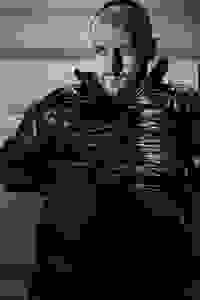 In this contemporary adaptation of the classic work, Cyrano seduces in raps and rhymes, using his linguistic brilliance to help another man win the heart of his one true love, and—above all—champions his own unbridled love for words.

Director Jamie Lloyd is known for his reinterpretations of classic works. He also directed the recent Broadway revival of 'Betrayal.'

See it if One of the better performances this year by the lead. A modern take on a classic.

Don't see it if If you do not like sparse sets.

See it if you enjoy classical plays staged with a modern sensibility, clever direction, a fan of McAvoy, minimalist but powerful

Don't see it if Expect a lot of scenery, props; don't like modern language thrown in or having to listen carefully to dialogue, not a fan of minimalism

See it if You love smart, well acted plays that make you lean in & listen intently to every word, but that are easier to understand than Shakespeare.

Don't see it if You dislike sparse (ie, no sets or costumes) shows that feel like something a step above a staged reading.

See it if you’d enjoy a James McAvoy tour de force. He delivers a smoldering Cyrano that makes you wonder why Roxanne can’t just look past the nose.

Don't see it if you need scenery in your plays. There is also a confusing scene with Cyrano and Christian but doesn’t detract much from the play overall.

See it if As with Fish's Oklahoma this is a completely different and new take on an old tale. Frenetic but never frenzied. Everything is controlled.

Don't see it if Heavily accented at times. FAST speech but always well enunciated. Its hard work, I've seen it twice (and the NTLive). Still work.

93
Imaginative and inspiring love-letter to words and language, Talented performers, Mesmerizingly-fast-paced, Emotional, In its simplicity is its brilliance, and in its brilliance is simplicity

See it if you don’t mind classic plays pared down visually and built-up verbally as a battle of wit and phrasing; the pen IS mightier than the sword.

Don't see it if seeking elaborate costumes, sets, & 17th-century realism. Focus on what is said, not how. This could be told in darkness and still move us. Read more

See it if James McAvoy. Stripped down Cyrano. Fierce.

Don't see it if Frenetic and wordy with heavy accents.

"This is not your grand-mère’s 'Cyrano.' Replacing Rostand’s stately 12-syllable alexandrines with jumpier rhythms, its euphemisms with plain speech and its perfect rhymes with ones so slant they serve as italics, Crimp rockets the action to a world drunk on language as it’s actually spoken. It’s also a world in which, as the baker Ragueneau (now a poet, too) predicts, 'There’s going to be a new force of words.'"
Read more

"Yup, you heard it. New York’s hottest ticket is a middle-aged white man rapping. That man is James McAvoy: booted and buzzcut like a Glaswegian squaddie and stripped to the waist. For nearly three hours he spits fire, spraying lyrical pearls at his enemies, nailing rap battles and chucking his battered heart beneath the feet of the woman he loves, Roxane."
Read more

"The Jamie Lloyd Company’s production was the pride of London in 2019. Lloyd is, for good and ill, a stylist, fond of precise stage choreography that fixes his actors into hieroglyphic friezes: When the 'curtain' (a plywood wall) flies up, the glowering company stands there, posed as if for a school picture — if every student wanted to kill you."
Read more

"McAvoy's entire performance (done in his native Glaswegian dialect) has that quality: you want him to want you. That it's entirely in keeping with the text is a testament to both his mastery as an actor and Lloyd's as a director, and this brilliant mixture of celebrity star power, sex appeal, command of language, and just damn good acting will make you fall in love with the power of words all over again."
Read more

It's a strange collection of debits and credits and how you might react to it is anyone's guess. If you love the original in all its florid glory, this determinedly caustic approach and frankly ugly design may prove fatally off-putting… If you wish to see a Belle Époque drama viewed through a 21st lens, revealing a poisonous sexual politics, this is the attraction for you. To my mind, Lloyd wrestles the play to a draw; his ideas are interesting, his results inconclusive.
Read more

"It’s not only the physical production that’s stripped down. Lloyd stages many of the scenes with the actors facing front—almost concert-style—with military-precision blocking. It’s low-key and unfussy, and puts the spotlight squarely on the verse. (The very free, and very accessible, adaptation of Rostand’s text is by playwright Martin Crimp.) In case you were confused about the star of the show, just read the phrase on the back wall: 'I love words, that’s all.'"
Read more

Playwright Martin Crimp, an adherent of the ”in-yer-face” school of British playwriting, has taken Edmond Rostand’s turn-of-the-last century verse drama, Cyrano de Bergerac, and not only blown off the cobwebs but exploded it into an entirely new 21st century experience. Staged by innovative director Jamie Lloyd, it has become a showcase for titanic Scottish stage and screen actor James McAvoy making an unforgettable New York stage debut in the title role as the 17th century poet and soldier.
Read more