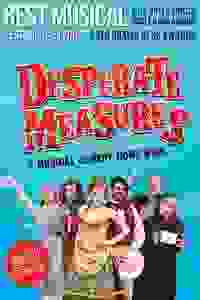 After a hit run at the York Theatre, this madcap, wild musical, set in the Old West and inspired by Shakespeare's 'Measure for Measure,' re-opens at New World Stages for an open-ended run.

When the dangerously handsome Johnny Blood’s life is on the line after a saloon brawl, he must put his fate into the hands of a colorful cast of characters including a mysterious sheriff, an eccentric priest, a sleazy governor, a saloon girl gone good, and a nun out of the habit. Before the sun sets, will they pull off the greatest caper yet? Will justice prevail or will Johnny be left hanging? 'Desperate Measures' won the 2018 Outer Critics Circle Award for Best New Off-Broadway Musical, and the Drama Desk Awards for Best Music and Lyrics.

See it if You like smart funny well written, well acted, clever and well sung musicals. It’s completely accessible though based on Shakespeare.

Don't see it if You’re looking for drama or a play. This is good silly fun.

See it if you like lean musicals with good bones, a brain & a heart.

Don't see it if you prefer your musicals to have elaborate sets & lots of extras. Read more

Don't see it if opposite of subtle; off-Bdway production like this does not have pizzaz provided by Bdway dance/set/costumes; voices not top-notch Read more

See it if It was entertaining and there were some good numbers, but it just didn't seem up to New York standards to me & I didn't find it that funny.

Don't see it if You want a polished show. It was fine but very simple which might be some of the charm (for some) but not so much for me in this case. Read more

See it if great staging

See it if Will’s Measure for Measure set in the West / Sung in rhyme, it’s a fun-filled fest / The Bard as farce is really the best.

Don't see it if You think it’s a sacrilege to alter Shakespeare.

See it if you enjoy Shakespeare simplified, and moved to a different local (the old west). Almost too clever adaptation of Measure for Measure

Don't see it if you are a Shakespeare purist or you cannot check your disbelief at the door.

See it if you'd like a rootin' tootin' depiction of Shakespeare with very strong comic performances.

Don't see it if you only like your Shakespeare straight, and you can't handle silliness. This is a lot of fun.

“Hilarious and tuneful show...Cleverly written in rhyming couplets that flow easily into song...It’s all played for silliness and director/choreographer Bill Castellino's slam-bang production, framed by designer James Morgan's sight gag-laden set, takes full advantage of a strong singing cast that also sports excellent comic chops...This reviewer would put it above any of the new musicals that opened on Broadway this past season for those seeking flat-out musical comedy fun."
Read more

"After a slowish start that sets up the situation, 'Desperate Measures' expertly mixes high and low comedy...Surely the direction of Castellino played a key role in the light touch maintained throughout...The show's hallmark is its good taste. By taking the premise at face value and playing it for all it's worth -- but without belaboring it in the slightest -- everyone involved has achieved exactly the kind of breezy, beguiling entertainment that should be on tap at all times."
Read more

“Purely fun, but as the role of art as an invitation to activism becomes more essential than ever, there is little escape to be found in a musical in which a woman considers marrying an authoritarian figure as a better solution than fending on her own...The musical isn't without its charms, most of them coming in the form of Molina, who turns in a performance of such comedic precision that comparing her to Lucille Ball feels like somewhat of an understatement."
Read more

"A constant smile-inducer of a musical...A tuneful, amusing, constantly surprising score...There’s virtually no end of encomia that can be poured on the cast members’ heads…Ryan has a strong voice—who doesn’t in this ensemble?—but he also is physically adept, constantly using his body for clownish punctuation…More off-hand with Susanna’s commitment to faith than Isabella is in the Shakespeare original, but that hardly matters when so much good clean fun is on tap."
Read more

"A rootin’, tootin’, scootin’, hootin’ Wild West musical comedy that likely will tickle those customers whose lower funny bones are within easy reach. It’s an awfully broad show for my finicky taste...Wants to be nothing more than a pleasant light entertainment that spoofs melodramatic horse operas…Cultivating these dandy performances and nimbly staging their doings with speed and good humor, Castellino has shaped a trivial, tumbleweed affair into a modestly diverting attraction."
Read more

"Shakespearean spoofs are almost as old as Shakespeare himself, dating back to at least the Restoration period. Although the vast majority has faded into history, there are still some real standouts like the classic musical 'Kiss Me, Kate,' which thanks largely to Cole Porter is arguably even more enjoyable than its source material, a rare feat that the relatively new musical 'Desperate Measures,' now in its second off-Broadway run, also accomplishes."
Read more

"In addition to the cast's sterling performances under Bill Castellino's simple yet lively direction, and James Morgan's easy moveable sets, what makes the musical work so well is Kellogg's facility with rhyming dialogue (natural and rarely forced) and one of the most tuneful scores of recent vintage."
Read more

"This clever and tuneful little show is better than ever on the larger stage...This cast is a wow! All inhabit their characters with impeccable comic timing and have vocal chops that do full justice to the ear-hugging songs and witty rhymed lyrics...Samuel Taylor Coleridge, who found 'Measure for Measure' to be the 'single exception to the delightfulness of Shakespeare's plays' would certainly find plenty to be delighted with in 'Desperate Measures.'"
Read more