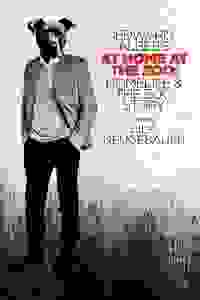 View in admin
Edward Albee’s At Home at the Zoo
NYC: Midtown W
83
Score it Scored!

This new production of the two-act drama, a revision and expansion of the 1959 classic 'The Zoo Story,' honors its author, the Signature Theatre Legacy Playwright Edward Albee, who passed away in 2016.

In act one, 'Homelife,' we see Peter and his wife Ann in their Upper East Side apartment; in the second act, the classic 'The Zoo Story,' Peter is forever altered by an oddly persistent stranger in Central Park. With jolts of brutality and Albee’s signature dark humor, this seminal play explores both the love and the cruelty that we inflict on each other every day. The cast includes two-time Tony Award-winner Katie Finneran, Tony Award-winner Robert Sean Leonard, and Emmy Award-nominee Paul Sparks.

See it if you like Albee. If you find his writing insightful and funny, you'll have a grand time.

Don't see it if if you don't like Albee (I don't) His privileged, whiny characters annoy me. Jerry was scary (not charming) throughout. This was not for me.

See it if you like good acting, directing was decent. A good story combining two of Albee's plays into one.

Don't see it if The set was not right for the first act, looked like a park wall rather then an apartment. If you don't like Albee.

See it if you want to be immersed in the lives of three people through well-written dialogue and strong performances. Albee captures people perfectly.

Don't see it if you cannot imagine the settings as the stage is almost bare. Your attention needs to be on the dialogue, character motion & body language.

Don't see it if musical comedies are your passion. This is a great combination of a classic play with a contemporary one shedding light on one character.

26
The most disappointed i have been in 2 years

See it if you want to see a superb production of a play that is a modern classic ... and a "prequel" that isn't.

Don't see it if you don't like talky plays, sexual references or violence Read more

See it if Love Albee & would be fascinated to see a new "prologue" to a well-known work. The 1st act enriches the 2nd in great measure. Don't miss.

Don't see it if Don't like minimalism/absurdism, can't sit thru silences or want light fare. This is intense, precisely calibrated & mesmerizing. Read more

"Neugebauer's terrific production proves 'Homelife' to be an indispensably excellent work in its own right, and a suitable tribute to the playwright...The Signature staging has only a ghost to appease; it is much freer and funnier and thus more powerful...The same is true of the actors: They do not approach the play as an awesome classic but as a living organism. Mr. Leonard is very good...Finneran is spectacular."
Read more

"A single drama Frankenstein-ed together out of two one-acts...Signature Theater follows Albee’s wish that the two be played as a single piece...It makes for an evening that's fully half bad. Yet there's good news: Thanks to the diamond like brilliance of Paul Sparks in 'Zoo', the show is unmissable...'Zoo Story' is a duet, beautifully orchestrated by director Lila Neugebauer. Leonard finds a world of grace notes to play, but the melody line belongs to Sparks, who prowls like a Muppet tiger."
Read more

"Sparks owns the show...Leonard and Finneran both acquit themselves well in the play's less fireworks-y roles. And Lieberman's clean, spare set-its white walls and floor covered in Cy Twombly-esque monotone scribbles-does a neat job of filling a sizeable stage with a play that's often staged in black boxes...There's nothing bad happening up on the stage, but there's nothing particularly spectacular either...Like Ann and Peter's marriage, it is exactly that: very safe."
Read more

"Masterly in its visual clarity and psychological acuity—though it cannot cover up the fact that Albee made a bad mistake when he wrote 'Homelife' and an even worse one when he yoked it to 'The Zoo Story'...Finneran’s performance is instantaneously involving, while Mr. Leonard brings off the wire-walking feat of being dull in an interesting way...Mr. Sparks’s performance is deliberately spectacular, and Ms. Neugebauer has framed it with the loving care of a curator."
Read more

"'Homelife' still sounds like characters spouting an author’s ideas about cruelty and isolation — and not real talk. 'The Zoo Story' still manages to unsettle....Three winning performances show off each work to its best advantage...Finneran brings so much smarts, humor, vulnerability and a subtle jagged edge to Ann that you can't take eyes or ears off of her...Neugebauer's direction cannily underscores the unnerving closeness - and more often distance - between people."
Read more

"Leonard's soft, measured line deliveries betray Peter's effortless privilege...Finneran introduces a nagging dissatisfaction to this picture of bourgeois bliss...She interprets Albee's language with aching sincerity...Sparks makes a thrillingly unpredictable Jerry, accenting his performance with birdlike eyes and pointed modulations in his voice...Even if your mind drifts away during this short story masquerading as drama, you'll be jolted back to attention by the explosive final moments."
Read more

"Though both plays are intimate by nature, director Neugebauer takes full advantage of the large stage...Leonard's beautifully subtle Peter is all the more fascinating for the emotions he hides than the emotions he expresses...The plays do tend to come off more like acting exercises than the social commentary they hint at. Still, the opportunity to see the first major work by one of America's most iconic playwrights paired with one of his last, makes for an intriguing experience."
Read more