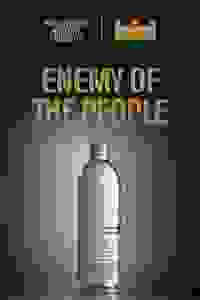 Emmy-winner Ann Dowd stars in this Ibsen classic, adapted as a solo show by Robert Icke.

Commissioned by Park Avenue Armory during the pandemic, this solo show weaves a tale of morality, suspense, and controversy, with multiple characters represented by a single actor.

The play centers on a small former manufacturing town that has been revitalized as a resort destination due to its natural hot springs. When a scientist, who is the sister of the town’s Mayor, finds that the water is contaminated and the baths must be shut down, a democratic society confronts, in public and in private, a complex ethical crisis.

The audience will be seated at tables and will be invited to vote as a group at critical moments of the story—and the majority vote will determine the play’s direction at each juncture.

Don't see it if You sit at tables of 5 (odd when tickets are sold in pairs). And you briefly discuss and vote on what course the play will take.

See it if You enjoy 1 person shows and enjoy some audience participation. Ann Dowd was excellent and the concept was new, fun and engaging.

Don't see it if You don't want to interact with other audience members. You are seated in tables of 5 and together you have to vote on the story outcomes.

See it if If you like one actor playing two roles. Audience participation. Very good acting and a concept play.

Don't see it if If you do not like audience participation plays. Individual tables and your say in the outcome.

See it if Well staged and thoughtful drama with audience choose-your-own adventure interactions.

Don't see it if You prefer a traditional proscenium style show.

See it if you want a new experiece of a classic. The use of screens fills the immense hall while encouraging audience interaction. Its a great story.

Don't see it if you are expecting to watch a traditional multi actor performance as part of an anonymous audience.

See it if like a well-acted 1-person play. classic updated for today without being too in-the-moment. voting was interesting but not necessary

Don't see it if need a multi-character play. need to bring yourself to this production to pay attention so not for those that just want pure entertainment

See it if you want to see a commanding performance by Ms. Dowd, interested in relevant ethical dilemmas, interested in ambitiously staged productions.

Don't see it if you don't like one-person shows, unconventional staging, or shows with a participatory aspect (discuss with your table on 2 options & vote).

See it if I mean at this point you should see everything.

Don't see it if no, see it. Read more

"That both siblings are played by Dowd is a problem, and a plus. The plus is that Dowd is an endlessly and effortlessly compelling actor, apparently unafraid of any extreme of human depravity...Because Dowd is playing both, and because she is a tiny figure on Hildegard Bechtler’s giant catwalk of a stage as it branches out amid the tables, she must push both characterizations to extremes."
Read more

"The gamified gimmick doesn’t quite make up for all that’s been stripped away, though it does offer the theatergoing set a chilling view of itself...Yet while Icke’s text disappointed me on two fronts (aesthetic and, though it makes me a pearl-clutcher, moral), I was still dazzled by his use of technologically complex mise-en-scène."
Read more

"In essence, she’s shouting in dead space to a room of muffled ears. We hear her words, we see her image on large video screens, but her live presence is diluted through technology...If anything, the 'Our Town' via 'American Idol' shtick leaches energy and tension from the story. We slide off our headphones, confer laughingly, and vote without much seriousness."
Read more

"It’s an illuminating exercise in both self-reflection and groupthink — and an example of how, as audiences emerge from personal hibernation, theater is seeking novel kinds of visceral engagement."
Read more

"Icke’s modernized elements (including making the protagonist female, emphasizing her character flaws while making her brother more sympathetic, and working in internet rumors, limited healthcare and frustrations with democratic norms) work quite well – so much so that one would like to see him direct the show in a traditional theater with a full cast and without alienating video and audio effects and gimmicky audience participation."
Read more

"While his script is a little bit too novelistic (a downside of many solo experiences), and the material a little too expansive to be conveyed by one fearless performer, I had a great time watching the moral gray areas play out in the hands of the wealthy Upper East Siders who cheered for the supermarket workers every night until they were able to flee to Sag Harbor...Unfortunately, the deck is so stacked against Dowd that 'Enemy of the People' is a losing battle for her from start to finish."
Read more

"The net effect is ultimately more gimmicky than thought-provoking. The play supposedly moves in different directions depending on how we vote, but we have to take the creators’ word for it since we only see one version...As with so many theater pieces developed during the pandemic, 'Enemy of the People' is more memorable as an experience than drama."
Read more

That the audience members had to spend time debating choices makes this “Enemy of the People” the exact right show for this moment. This is not because we as Americans are facing some critical choices ourselves, although we are, but because, as the city and its theaters reopen, it offers an excuse and an opportunity for people who might not have seen each other for more than a year to get together in person and actually talk.
Read more