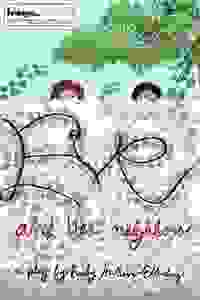 Eve and Her Neighbors (FringeNYC) NYC Reviews and Tickets

See it if you want to see a great feminist take on life in Eden before the fall.

See it if you want a mostly female cast, a different account of whether the Garden of Eden was paradise and a different explanation for the expulsion.

Don't see it if you want more than one-sided characters and an undeveloped idea. This play failed to meet its potential. I give it a C- grade.

Don't see it if You are hoping to see an interpretation with a twist or even a clever take on the old story. This was anti-women and anti-men in one take.

See it if you like funny plays and funny women.

Don't see it if you're not into women's rights or character acting.

See it if Listen a clever, satirical, funny twist to an story.

Don't see it if you sit in your seat with the expectation to indulge yourself in theater. it is a short play.

Don't see it if You are expecting complex and developed ideas and clever writing. The advertising oversold this show, and it ended abruptly.

Don't see it if You're a loser.

"We wonder why Eve didn’t depart sooner, and a little more effort to show Paradise’s appeal might have created some interesting dramatic tension…'Eve' sets up a plot rife with issues of gender parity, free will, and self-definition, but never quite gives these themes their full due. However, by highlighting this well-known tale's all-too-familiar flavors of sexism and power dynamics, Hutson-Ellenberg invites us to consider Eve’s side of the story."
Read more