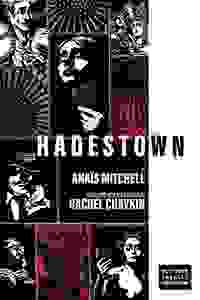 Set in a post-apocalyptic America, this sung-through musical chronicles Orpheus' mythical quest to overcome Hades and regain the favor of his one true love, Eurydice. We travel from wide open plains where love and music aren't enough to sustain the residents, down to Hadestown, an industrialized world of mindless labor and full stomachs. Inspired by traditions of classic American folk music and vintage New Orleans jazz, Mitchell's beguiling melodies and poetic imagination pit nature against industry, faith against doubt, and love against death. Directed by Obie Award-winner Rachel Chavkin.

Don't see it if Very uncomfortable seating. The littlest bit of knowledge of Greek myths enhances, but the lack thereof doesn't detract from the enjoyment.

See it if You want to see an absorbing intimate production! Great story with a stellar cast and wonderful music & lyrics!

Don't see it if You aren't willing to sit in incredibly uncomfortable seating for over 2 hours. The theater was also pretty hot, felt like I was in Hades.

Don't see it if I don't even know what to say here. You are seriously missing out if you miss this gem.

See it if You enjoy original music in an intimate setting, along with fun staging and storytelling. I loved the harmonies by the 3 Fates.

Don't see it if You are looking for something deeper.

See it if You are an Anais Mitchell fan, like New Orleans inflected music, funky characters, clever movement, deep and amusing lyrics,

Don't see it if You don't like New Orleans style music, have difficulty following lyrics, not a fan of the Orpheus myth, don't like sitting in the round

See it if You like original, creatively staged indie rock musicals based on classic stories (along the lines of Spring Awakening and Rent).

Don't see it if You're into bigger, flashier Broadway fare as opposed to small, chamber-like pieces.

See it if you're a sucker for great music and a romantic story told in an unconventional way.

Don't see it if you prefer a more clear-cut narrative or a happy ending.

See it if You want a modern take on the Orpheus myth. You want a high-energy show with really good music. You enjoy folk & Cajun music.

Don't see it if You want a traditional take on Greek myths. You prefer traditional theater seating. You don't like folk or Cajun music.

“A gorgeously sung, elementally spare production...The performers intermittently move through aisles in the audience, bringing an inviting intimacy to the production. It’s a smart tactic, because while its score is continually beguiling, ‘Hadestown’ might feel static were it not for Ms. Chavkin’s simple but inventive staging...Ms. Mitchell’s lovely music and well-turned lyrics are tightly bound together, and recall traditional folk music with a distinctive Southern flavor.”
Read more

“The stellar ensemble fills the theater with soaring harmonies, weaving in and out of the audience and the onstage band. Mitchell’s music, lush and strange and lyrically brilliant, has found its match in this cast...The one weak spot is Daunno, whose vocal and acting chops don’t stack up against his peers. Still, ‘Hadestown’ is something special, a sensory feast that’s also a passionate debate between pragmatism and romance.”
Read more

“The likelihood of enjoyment may depend on your willingness to accept that what you are watching is not in fact a musical but more of an illustrated pop concert, if a very pretty one. On the other hand, if you go in hoping for a story told through song, the traditional province of musical theater, you will be very much disappointed...Luckily the singing is generally excellent...When almost everything is narrated, the lack of variety dulls emotion and smothers the pulse."
Read more

“The material has been given an enthralling environmental staging...Energetically sung by the powerful-voiced ensemble, the music is terrific: endlessly inventive and eclectic, as melodic as it is funky and folksy...The lyrics aren't as scintillating as the music, and the action feels overly busy at times. The dialogue can be wince-inducing...It hardly matters, thanks to the music's relentless energy and inventiveness as delivered by the crack band and terrific ensemble.”
Read more

"First recorded and performed as a concept album, the song cycle by Anaïs Mitchell is easy listening, sometimes sparkling…Director Rachel Chavkin working with terrific design talent and superb jazz-meets-country orchestrations by Michael Chorney, provides a Tiffany setting for Mitchell’s work...I didn’t weep for E&O when he blew their escape plan in the end. But maybe it’s me: The lady seated behind me, emoting heartily the show, was practically speaking in tongues by the end."
Read more

“Proves to be smart and romantic but dramatically underwhelming...In Mitchell’s hands, the sensitive Orpheus is too focused on playing the guitar to provide for Eurydice’s real-world needs, so she independently ventures down to an industrialized underworld...The cast is excellent and songs are either gently touching or catchy, but ‘Hadestown’ does come off as slow, undercooked and choppy, more reminiscent of a concert than a theatrical work.”
Read more

“Chavkin has crafted a visually arresting production to match the richness of Mitchell's score...Chavkin and Mitchell enrich this ancient story in their imaginative rendering, making the characters and their relationships seem fresh and relatable...Everything about ‘Hadestown’ is designed to grab your attention and pull you into the story. Even if you are not a fan of folk music, it will be difficult to resist this tuneful and visually spectacular production.”
Read more

“What's most engaging about ‘Hadestown’ isn't the story it tells but the way it tells it -- with a barrelhouse sense of rhythm and plenty of blue notes. Under Chavkin's direction, the entire cast is in synch with the music's sassy, cynically upbeat mood, delivering each lyric with a lazy vibrato and a shrugging acknowledgement of the world's wicked ways...‘Hadestown’ delivers its tragic tale with a wink and a snap in its step."
Read more