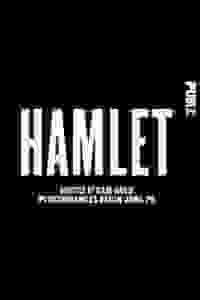 Oscar Isaac ('Star Wars: The Force Awakens,' 'Inside Llewyn Davis') returns to The Public for this intimate new production of Shakespeare’s eternal drama.

Hamlet is caught between thought and action, anger and anguish as his uncle assumes the throne left vacant by his murdered father. As the dead King calls to him from the grave, demanding to be avenged, Hamlet is forced to choose between bearing the oppressor’s wrong or taking arms against a sea of troubles. Tony Award winner Sam Gold ('Fun Home,' 'Othello') directs theater’s most famous tragedy about life and death, madness and conscience, and corruption—of the state and of the soul.

75
Many "bits" distract, Helpful to know the play, Definitely different, Gold is overrated, Isaac is great

See it if you can put up w/Gold's intrusive choices to see Isaac's intelligent, funny, comprehensible, well-spoken H. 4 hrs zoom by. Intimate setting.

Don't see it if meaningless, distracting flourishes annoy you. For every good Gold choice, 2 bad ones. Messiest stage ever. Double casting can confuse. Read more

See it if Oscar Isaac and Peter Friedman are the reasons this play is as good as it is.

Don't see it if you thought knowing this play would prevent confusion; costumes and set are uninteresting; direction is uninspired, strange and shotty. Read more

See it if You like to see Shakespeare in a non-classical production. Oacar Isaac and Keegan-Michael Key add a new perspective to Hamlet.

Don't see it if You like your Shakespeare exactly as written, stage notes included.

See it if You want to see just how wrong a director's choices can go. 9 mostly good committed actors without cohesion or soul.

Don't see it if you dont want to watch Hamlet in his underwear. The words are there but the heart and meaning arent. Uneven tone, Key as comic relief. Read more

See it if you like Sam Gold's minimalist direction and quirky choices to a classic. Oscar Isaac's performance is not overrated—he was exceptional.

Don't see it if you find Shakespeare plays boring, dislike director making bold and modern choices, or if 4 hours is too long for you to endure.

See it if Oliver Issac and company. Intimate setting. Shakespeare.

Don't see it if Modern production is unnerving

"A gloriously involving new production...The show’s intimidating four hours pass as quickly as a night at a bar with some of the best storytellers you’ve ever met...The troubled relationships of the extended family of Elsinore have rarely read so clearly or affectingly...The nine actors in the ensemble deliver such a completely inhabited performance that I didn’t feel restless, as I usually do, when Hamlet wasn’t around...Some interpolations give pause."
Read more

"Gold’s 'Hamlet' forsakes grandeur in favor of small moments of clarity. Its focus is on theatricality, comedy and language...'Hamlet' features some wonderfully vivid performances: from Isaac, who gives Hamlet a sometimes ruthless charm; but also from the superb Peter Friedman and Ritchie Coster...The production occasionally gets muddy...If this 'Hamlet' is rarely emotionally moving, it is never less than engaging."
Read more

“Disarmingly brilliant…This ‘Hamlet’ engages us in a game that makes us contemplate the very nature of performing…The heart of Gold’s production — and its genius — lies in its obsession with the paradox of the Honest Performance…Isaac, at once mischievous and deeply soulful, is exceedingly good…It is the mark of a deeply intelligent production when it makes you hear anew a work encrusted with so many barnacles of historical, literary, and theatrical precedent.”
Read more

"Oscar Isaac is a sensational Hamlet...That his performance registers so effectively is an additional credit to Isaac, given how many obstacles director Sam Gold throws in his way in a gimmicky modern-dress production that often seems more WTF-perverse than audacious...I spent much of the first two acts admiring the actors but scratching my head about the director's intentions."
Read more

"An audacious, highly stylized production that is technically faithful to the text, but flaunts tradition in almost every other respect...If any version can ever be called a definitive 'Hamlet,' this one isn’t really in the running; Gold’s staging is too cheeky, and his tone careens too wildly between farce and tragedy...But there’s a method to his madness, too, and enough eternal magic in the material to make four hours feel fully, smartly spent."
Read more

"Isaac’s Hamlet is to die for, but director Gold’s bizarre 'Hamlet' is to shoot on sight...Gold’s hammy production...is as pointless as it is solipsistic...The Anspacher Theater is a beautiful, intimate theater with wonderful sight lines that allow you to overlook much of this directorial gimmickry and admire Isaac’s brilliant performance up close and personal...In Gold’s weirdly cast production, the rest of the performances are almost evenly divided among good, meh, and let-me-out-of-here."
Read more

"If it isn’t exactly my kind of 'Hamlet,' it’s still exciting in its own up-close-and-personal way...Isaac's interpretation is singularly intelligent—every line reading is fresh and spontaneous—and to see and hear him in the close quarters of the Anspacher Theater is to be caught up anew in the burning immediacy of the moment...Mr. Gold’s staging, a few too-clever touches notwithstanding, serves the text rather than obscuring it...All in all, his 'Hamlet' is much more than satisfying."
Read more

"Several fine performances sparkling through a muddy and incomprehensibly vulgar reading...The performances evidence a cast at sea, compounded by doubling and tripling of roles that makes the plot confusing, not to say ridiculous. If that’s Gold’s intent, he has success, if not Shakespeare. But I kept waiting for an engaging, or at least interesting, point of view to emerge. I was still waiting when the time came for Fortinbras to appear as witness to the carnage at play’s end."
Read more