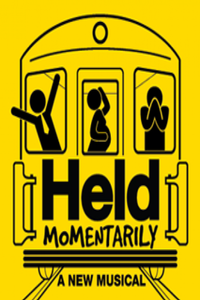 Part of the New York Musical Theatre Festival, this new musical takes us into the NYC subway, where six strangers are trapped on a stalled subway car.

Something’s up down below. A couple who have just concluded an unsuccessful blind date, a discouraged medical student, a pregnant woman, a gay young man whose boy friend is cheating on him, a disgruntled business man, and a bag lady are trapped on a stalled subway car. These six strangers discover it's not just the train that's stuck. In spite of their diversity, they open up with one another. Relationships are broken and begun. A career commitment is revisited. A poignant musical comedy about making connections, living in the moment, and moving on in life. Oh, and one more thing: a woman just went into labor.

See it if You've never actually been in NYC... then you might believe this load of hogwash.

Don't see it if You want to see something...good?

See it if you're a fan of NYC specific shows aimed towards the 20-30something crowd, or have ever gotten stuck on a train and hated every moment of it

Don't see it if you're not okay with occasional moment of purely outrageous physical comedy, like someone giving birth on stage.

"The pitch perfect ensemble does its best to remind us of how hard it feels to be a member of society, when all you wish you could do is take a breather. For a show that could’ve consisted of complaints about the MTA, Houser’s musical chooses to be a humanist beauty,a piece of musical theatre that challenges us."
Read more

"The book, music and lyrics are allowed to take center stage, reaching the audience on an essential emotional level, which enables the actors to access the material with determination and conviction. Choreography lends a lighthearted touch with conventional movement in absurd situations. Music is a driving force."
Read more

"'Held Momentarily' is just another musical about people getting stuck on the train. Only it’s the most realistic. In it’s current form, 'Held Momentarily' is mediocre and will easily get lost in the shuffle. At such a short running time, building up the story and characters will be essential for any hope for the future."
Read more

"The New Yorkers in this subway-set musical first appear as flat, ordinary types—yet happily, there is depth and promise after all... Strangely, there’s a conspicuous lack of earbuds and smartphones, the devices we use to disconnect ourselves: A stronger digital presence would have been useful and more believable. Also, Hunter Bird’s direction can’t quite strike a balance between youthful, energetic singing and dancing and intense, sometimes overwrought dialogue."
Read more

"The musical's upbeat, witty take on everyday annoyances and disappointments is reminiscent of 'Avenue Q,' and the ensemble cast has a similar charm. Within the economical hour-long time slot, the characters' back stories are kept fairly simple, which sometimes encourages cliches. Still, they feel reasonably developed, and the performers provide emotional sincerity and realness...The show as a whole still has room to continue to develop, but 'Held Momentarily' offers a promising premise with plenty of room to grow."
Read more

"'Held Momentarily' brought the audience to its feet after a fantastic performance...Amidst the comedy, the singing, and the hilarious 'subway-shuffle' choreography, 'Held Momentarily' makes a powerfully thought-provoking statement for any New Yorker who has ever ridden the train... It’s no wonder the audience fell a little bit in love with this production and I’m sure that none of us will ever look at a simple train ride the same way ever again."
Read more

"This show was an emotional ride through what it’s like to be an up-and-coming adult in the city, full of insider jokes and unique relationships. The characters are deceptively simple tropes at first but demonstrate their individuality well. Some of the plot points are a bit unbelievable, and a birth in a subway seems like a forced way to create a climax; this musical could have worked better with an untraditional narrative."
Read more

"The music is upbeat and catchy. Hunter Bird’s direction is smooth and balanced, the sound and lighting are unobtrusive and work very well to set the pace for the back and forth of present story and flashbacks...But the most appealing thing about 'Held Momentarily' is the well-observed inside jokes, which include jabs at the MTA, the mayor, the social consciousness and Internet dating."
Read more