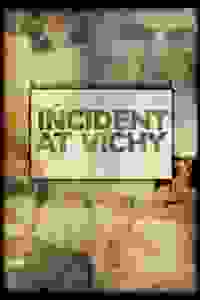 In celebration of the centennial of Arthur Miller’s birth, Signature revives Miller's 1964 play 'Incident at Vichy,' about a group of men detained in France during World War II.

'Incident at Vichy' marks the return of the Pulitzer Prize winning playwright to Signature for the first time since his 1997-98 Residency. In Vichy, France at the height of World War II, nine men and a boy are rounded up under suspicious circumstances. As ominous reports of far-off camps and cattle cars packed with prisoners begin to circulate, the men battle over politics, philosophy and how to escape. Longtime Signature director Michael Wilson helms this haunting examination of the cold, bureaucratic efficiency of evil—and the shared humanity that might overcome it.

See it if intense discussions of several clashing world views. All relatable at the same time. Changing each other. Brilliantly written and acted.

Don't see it if you're looking for lighter fare.

See it if You like dramas with heavy subject matter and enjoy superb writing, strong performances & material that remains relevant in today's world.

Don't see it if You are looking for something light or comedic.

See it if you like intelligent theater. The talky, insightful play is ultimately moving. The ending, w/the train rumble cutting thru you, devastates.

Don't see it if you want an updated response to the material. This is a solid, old-fashioned production. Strong acting, well-staged, but a bit plodding.

See it if you enjoy robust dialogue delivered energetically by a large cast or enjoy Richard Thomas' subtle performance.

See it if you think you've seen every Holocaust story there is to be told (this one is different) and you like intense and thought-provoking stories.

Don't see it if you're in the mood for something light and fluffy.

See it if You have heard of the play and want to see if staged and/or want to see the particular actors. It was interesting.

Don't see it if You want to see a fun cheerful play.

See it if you enjoy serious drama from one of our country's master playwrights, Arthur Miller. Also, if you enjoy great ensemble acting.

Don't see it if you cannot understand intelligent theatre that resonates into our world today.

"As the respectable if sometimes stolid revival reveals, the passing of the decades has perhaps inevitably dimmed the play’s power...What’s appealing about this rare chance to see 'Incident at Vichy' is the opportunity that it affords to hear Miller’s ethical insights and piercing intelligence resounding with such unbridled forthright eloquence. What’s less appealing? Well, all that resounding eloquence."
Read more

"Directed somberly by Michael Wilson, 'Incident at Vichy' depicts 10 men who have been rounded up by the police on suspicion of being Jewish; their papers and their anatomy are to be checked...Earnest urgency often sounds like an essay or a lecture...The paradox of this highly discursive work is that the characters who say the least are in some ways the most effective...Dramaturgically stuffy though it may be, 'Incident at Vichy' gives an airing to still-timely concerns."
Read more

"'Incident at Vichy' has too little characterization to support its encyclopedic philosophizing…It is even possible to imagine its being gripping, under the right circumstances. Unfortunately, the current production, directed by Michael Wilson, only reaches that level a few times...The performances are not what they need to be, either. What’s needed are actors who know how to suggest complete histories, even where Miller doesn’t provide much opportunity."
Read more

"It deals with powerful themes of guilt and responsibility, tautly dramatized and well-defined. But the play is also talky and didactic, its themes expressed too baldly…Still, the brief work has a gripping cumulative power that builds to a surprising conclusion, which is at once uplifting and tragic. Director Michael Wilson's staging is highly effective, with sound and projection effects heightening the tension at key moments. The large ensemble is mostly excellent."
Read more

"A creakily earnest one-act play...While waiting to learn their unsurprising fate, they make speeches, some of them craven, others noble, and all written in the well-known Miller manner….Miller undercuts their effect, such as it is, with a speciously uplifting denouement that fails to convince. Michael Wilson ratchets up the dramatic tension much higher than you’d think it could possibly go, and his ensemble cast is superior, especially Richard Thomas."
Read more

"While it occasionally feels like an essay repurposed as a drama this excellent cast breathes life into the author's extended musings…Unfortunately, there is precious little sense of impending doom in this play about men waiting to be taken to their deaths...Wilson's faithful, by-the-book staging, however impressive, does little to offset the feeling that we're watching an elaborately decorated college seminar."
Read more

"A fine and sensitively-acted production...Audiences love stories of heroism and self-sacrifice, and Miller does offer some satisfaction on that end, but 'Incident at Vichy' is more about the survival instinct...It can be an uncomfortable play to watch, but it's the discomfort that makes it good theatre."
Read more