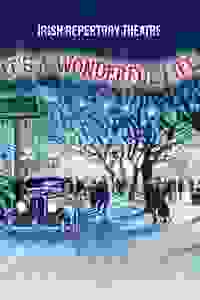 View in admin
It's a Wonderful Life: The 1946 Radio Play
NYC: Chelsea
89
Score it Scored!

It's a Wonderful Life: The 1946 Radio Play NYC Reviews and Tickets

Christmas Eve, 1946...George Bailey, the nicest guy in town is in a terrible predicament. We find him perched precariously on a bridge, on the verge of suicide. Enter Clarence, George’s guardian angel, who has not yet earned his wings. Clarence shows George what Bedford Falls would be if George had never been born!  Set in a radio station in the 1940s, with a live sound FX artist, this poignant drama features six actors portraying 25 characters.

See it if you enjoy seeing a classic film turned into a radio play. A winning cast of 6! Orlagh Cassidy is a wonder!!!

Don't see it if no reason not to see this production—perfect for the holiday season (despite the fact that it is sold out for the remainder of its run).

See it if you want to spend 70 minutes with a delightful cast who re-imagine an old movie (that I'm not particularly fond of). I loved this version.

Don't see it if intimate little plays are not your cup of tea.

See it if you want some nostalgic holiday cheer, and are a fan of the movie

Don't see it if you're expecting to see a full-fledged production, with all the scenes from the movie fully realized.

See it if want to spend an absolutely delightful holiday evening:)

Don't see it if You want a full blown production of It's a Wonderful Life . Read more

See it if you want to get an authentic glimpse of the 1940s... a Radio play, beautifully presented with wonderful acting. I hope they bring this back.

Don't see it if you do not like small intimate productions, with a big heart.

"This version doesn't diverge from or reinterpret its widely beloved source material...Duffy offers the most consistent delights with his props and gadgets for creating the sounds...To hanker for a more emotionally wide-ranging experience is to wish for something fundamentally different from what Palermo and Moore are interested in providing...Comfort food par excellence...There's nothing wrong with indulging, especially under hands as capable and affectionate as these."
Read more

"Does any film director better define or describe the All-American spirit than Frank Capra? And does any other of Frank Capra's films better describe the All-American spirit than his Christmas movie 'It's a Wonderful Life?' Capra's 'It's a Wonderful Life' is now an unusual stage play, presented as it first was a couple years ago at the Irish Rep as if it were a live radio play."
Read more

"It may be hard to imaging the story without Jimmy Stuart. But happily these actors are really wonderful and Moore handles the material so expertly our imaginations can easily fill in the blanks...If you're finding these dim days of December are a little dimmer than usual, give your heart cheer and your soul comfort with the pure goodness of a show that celebrates people who love, comfort, and care for each other."
Read more

“What a treat this radio play adaptation is...There is an easiness in the air and camaraderie amongst the lot...All play their numerous parts with relish and joy, surprising us all with their versatility, energy, and stage presence. They really do a spectacular job connecting us to the film while keeping us with them in the radio theater...The end wraps it up a bit too quickly, and doesn’t have the emotional ring to it like the film, but it is amazing how in 70 minutes they accomplish so much.”
Read more

"The deftly executed script covers all important touchstones in heart-warmingly familiar scenes with abbreviated dialogue. It’s great fun to watch the studio SFX artist (Rory Duffy) create atmosphere with cued sounds...Director Moore has created a believable double scenario from the naturalness of station W I R T and its wry-to-us commercials, to the play within the play which captivates from the get-go. Characters are well defined, turn on a dime, and relate as if a long time company."
Read more

"A clever way to present the story from a new angle...We get nostalgia, the pleasure of 'live' radio and the spine of the film’s story all at once...The set-up is low-key and winning...Anyone who has ever watched a radio play being performed knows what a treat that is, from observing the simple sound effects to the fun of seeing an actor switch from a little child to an old woman in the blink of an eye and so on...Moore directs the cast with a light touch and they are uniformly strong."
Read more

“In no way could we be disappointed by this wonderful live radio-play...Adapted by Palermo in a homey style, it runs just over an hour. In director Moore’s hands, the themes and story soar as the cast pulls out all the stops and sink their teeth into the well-known characterizations...Moore and the cast and crew honor 'It’s a Wonderful Life' in this joyful commemoration, and what a sterling message to venerate.”
Read more