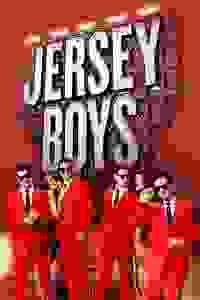 The Tony-winning hit musical about Frankie Valli and the Four Seasons is revived Off-Broadway.

The jukebox musical tells the story of Frankie Valli and The Four Seasons, from the streets of New Jersey to the Rock and Roll Hall of Fame. It won the Tony for 'Best Musical' in 2006.

The show features fan favorite songs made famous by Frankie Valli and The Four Seasons, including 'Sherry,' 'Big Girls Don't Cry,' and 'Can't Take My Eyes Off You.'

See it if You like a good story that is biographical in nature with great singing. Very good staging and story behind the music.

Don't see it if It can be sad at times, funny at times. Better if you know the story of Frankie avallie and four tops

See it if you love the Four Seasons; otherwise, see BEAUTIFUL. JB is dark; these guys were no saints. Many good songs, but they're pale imitations.

Don't see it if you hate loud music, flashing lights (one song is an assault), or hearing mostly male voices (barely any women in this production). . Read more

See it if you want an entertaining evening of non-stop action performed by a great cast singing songs you know around an interesting story.

Don't see it if you do not relate to the music or the New Jersey scene of the 1960's. Language may be offensive to some.

75
Don’t be disappointed in what this off broadway juke box musical, centering on frankie valli and the four seasons, isn’t; enjoy it for what it is!

See it if Great Story and singing great. The time fly by watching this show.

See it if you can relate in any way to Four Seasons' jukebox musicals.

Don't see it if you order plot with your jukebox.

Don't see it if when everyone is singing every song in the audience.

"That 'Jersey Boys' still delivers some Pavlovian thrills is a testament to the solid foundation laid by Marshall Brickman and Rick Elice’s book, and by Des McAnuff’s deceptively straightforward production...Perhaps it was the bigger theater that allowed the book to breathe; at the subterranean New World Stages, there is whiplash in the air...In its current state, 'Jersey Boys' is like a cover band covering a cover band — your enjoyment will be in direct proportion to your love for the songs."
Read more

"With Jersey Boys, the Broadway musical has finally done right by the jukebox, presenting the Four Seasons' infectiously energetic 1960s tunes as they were intended to be performed. True, the script adheres closely to the dramatic beats of a VH1 biopic. But under Des McAnuff's sleek direction, the result feels canny instead of canned."
Read more

"Jersey Boys may aim only to be a shallow, big-budget, crowd-pleasing jukebox musical, but it’s a model of the genre. The real source of the show’s power—obvious as it sounds—is the songs. McAnuff shows a rare, laudable willingness to stick his finger in the electrical socket of pop music, to take full advantage of the band’s potent catalogue."
Read more

"Jersey Boys, which tells the story of Frankie Valli and the Four Seasons, looks to be a winner. The splendid actors take turns narrating the group’s rise from lower-class Jersey doo-woppers to Rock and Roll Hall of Famers, and they’re as tight musically as they are persuasive dramatically. The audience is tickled to death."
Read more

"O.K, so the book is clunky, the backstory is emotionally skeletal and the structure sticks to a generic “VH1 Behind the Music” model, but glance around during the songs in “Jersey Boys” at the middle-age women dancing in their seats while their husbands’ heads bop to the music and it’s clear something is connecting."
Read more

"Jersey Boys is nothing more than 32 songs performed on a cheap-looking set by a high-priced lounge band, strung together like dimestore pearls on the most vapid of all-tell-no-show books. All I can say is that it would be a lot simpler for everyone involved if they'd just move the whole thing to Newark."
Read more

"Jersey Boys wears its jukebox-musical credentials without apology, and it really rocks. The energy is unstoppable, particularly from the four lead performers. The physical production is impressive with pop-art projections. Jersey Boys shows there still is theatrical life in mining pop hits from the past."
Read more

"“Jersey Boys” is no nostalgic stroll down rock’s Memory Lane. It’s a show still dynamically alive in music while, as a drama, it catches the very texture, almost the actual smell, of its time. "
Read more