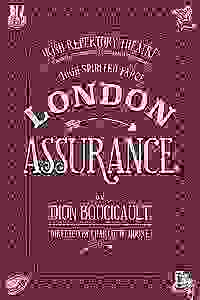 A parade of eccentric characters and merry mishaps ensue in Dion Boucicault's 1841 comedy of manners.

In this high-spirited farce, the vain and lustful Sir Harcourt Courtly travels to Oak Hall to meet his bride-to-be, the charming young Grace Harkaway, whose hand comes with £15,000 a year. But when the beautiful and vibrant Lady Gay Spanker joins the party, Sir Harcourt becomes too enamored with her to notice that Grace is falling in love with his young son Charles, who has arrived in disguise, pursued by his creditors! A parade of eccentric characters and merry mishaps ensue in this classic comedy of manners.

This beloved play catapulted the then 20-year-old Dion Boucicault to fame when it premiered at London’s Covent Garden in March of 1841. It was the beginning of a long and storied career for the young Irish actor/playwright, who is considered one of the most successful and influential theatrical figures of the 19th Century.

Don't see it if You are uninterested in a 19th century romantic farce that goes on for 2 1/2 hours. Simple characters, elaborate speech. Read more

See it if you're interested in an exquisite production where every raised brow & bouncing curl conveys subtle meaning and lots of fun.

Don't see it if 19th Century farce bores you. The plot is thin with no redeeming social value except for a good time.

See it if to see an elegantly staged 19th C farce, wherein love triangles, deceptions & hijinx abound and lead to a predictable (but satisfying) end.

Don't see it if u seek something heady, deep or contemporary; u don't appreciate 19th Century comedy of manners; u expect the biting wit of Shaw or Wilde.

Don't see it if farce is not your thing, don't like plays from the 1850's, not in the mood for frivolous yet artful comedy, slightly overdone characters

Don't see it if An early Boucicault voyage in comedic playwriting had yet to reach the heights of later, more skillfully plotted works Not w/out its charms

Don't see it if See also for positive and negative When the theater was redesigned a few years ago, why were the seats not realigned? Read more

See it if you like an old fashioned farce from 1841. Dialogue is typical of that time and is a little heavy handed. Good acting and staging.

Don't see it if you don't like old plays with old fashioned dialogue. Don't see if you like modern sophisticated dramas. Read more

See it if Witty period farce has a foppish papa and his disguised pup in a love triangle over an engagement weekend. Great unaware lead and revolve.

Don't see it if If disabling the woke-metre, you'll be delivered what this Company excels: directing, acting, writing, set,and costume in a protective time.

"‘London Assurance’ Minds Its Manners: A 19th-century comedy from Dion Boucicault, at the Irish Repertory Theater, showcases some delicious characters in an imperfect vehicle."
Read more

3/5 Stars "Inspires more grins more than guffaws. But while this antique can never truly shake off all its dust, Moore is blessed to have gifted stage vet McPhillamy in the central role...It's a testament to the artistry of this production that it makes the play so assuredly agreeable."
Read more

"London Assurance is a Victorian Comedy About Old Man Swagger: Dion Boucicault's breakthrough comedy gets a revival at the Irish Rep."
Read more

"'London Assurance' is a perfect whirligig of complications, all of them neatly tidied up, in time for the final curtain, by a playwright more interested in symmetry than reality."
Read more

"To be sure, Boucicault's comedy isn't a masterpiece, but it's silly fun, especially with a cast that's having a good time, which the Rep's company certainly is. And although the production could use a little tightening...this 'London Assurance' is a holiday treat the whole family can enjoy."
Read more

3/5 Stars. "While the pleasures of the play may be eternal, modern productions require a particular dexterity. This production's shortcomings notwithstanding, it's not a bad place to spend a chilly evening."
Read more

"Fortunately, the Irish Repertory Theatre's founder and award-winning director Charlotte Moore has found the right formula to pull this tricky kind of comedy off with her assured production of Dion Boucicault's 1841 play London Assurance."
Read more

"'London Assurance' is still a witty and lively play after almost 180 years. With its farcical elements laid over a drawing room comedy plot, Charlotte Moore's adroit production...mines the play for all of its humor and wisdom concerning the foibles of human nature and self-delusion."
Read more