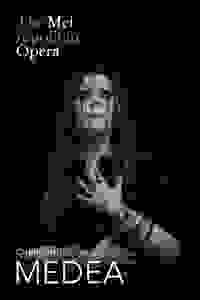 The Met premiere of Cherubini's classic opera based on the Greek tragedy.

The classic tragic opera tells the story of Medea, a former princess of the kingdom of Colchis, as well as the wife of Jason. When her husband leaves her for a Greek princess of Corinth, Medea takes vengeance on him by killing his new wife along with her own two sons, later escaping to Athens for a new life.

See it if you like your revenge operas on full tilt: larger than life emotions, tender love scenes, brutal betrayals,violent endings & wronged heroine

Don't see it if you're not a fan of McVicar's always-somber dark staging (large mirror provides some nice visual touches, but overall the stage is boring).

See it if I was lucky to see the opening night performance of this wonderful production. The soprano portraying Medea Sondra Radvanovsky was just

Don't see it if Intense and earned many applause from those in attendance. A great way to start the new season at the Metropolitan Opera.

See it if The incandescent soprano Sondra Radvanovsky burns a hole in the Met stage in Cherubini's Medea; aided by Matthew Polenzani's fierce Jason

Don't see it if Cherubini's music is a bit lackluster & McVicar's staging is a bit indulgent but nothing can dim Radvanovsky's raging, aggrieved Medea

Don't see it if you don’t like opera or Greek tragedy, or want to see great ensemble opera. The beginning and every other scene without Radvanovsky dragged

See it if You like operas, it is very well done

See it if You love opera

Don't see it if you expect theater creatives to actually attempt fresh interpretation of a hoary antique in a way that moves a modern audience . . . Read more

"The influence of 'Medea,' in turn, can be heard in the fiery outbursts and discomfiting mad scenes in the bel canto works of the decades that followed."
Read more

"The opera itself, even in this eye-catching new production directed and designed by David McVicar, is a creaky thing."
Read more

"This is the kind of finely crafted madness that keeps us coming back to the Met."
Read more