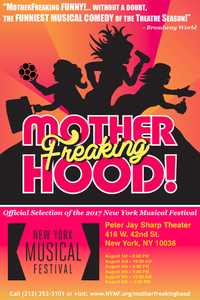 Rachael, wide-eyed and optimistic, is elated to finally put her party days behind and become a mom...#YAY! Angie has pre-enrolled her unborn child in the most exclusive all-girls preschool (definitely a girl, she already has a boy). After three kids, Marcia thought she was done. Is it bad that she doesn’t want to cancel her wine of the month club or stop having sex on her back? With a soundtrack ranging from rock to pop to funk and more, join these three unlikely friends as they bond in the trenches from pregnancy tests to empty nests, dominating the diapers and tackling the teens with unmotherly charm, one bottle at a time! An official selection of the 2017 New York Musical Festival.

See it if You like to see humor in child rearing from birth to graduation. A terrific musical that is part of the NYMF, sung by 3 talented women.

See it if you want to see a funny show with entertaining songs about what it is like to be a mother.

Don't see it if you don't like shows about motherhood or shows that can get a little bit vulgar at times.

See it if you want a really clever look at mothers and how they cope. Well conceived musical with amazing cast. Thoroughly enjoyable.

Don't see it if It won me over. Take a chance and see it.

See it if If have a mother, been a mother or expect to ever be a mother.... hell just see it. Could identify with each character in a different way

Don't see it if idk

Don't see it if You can't get there this weekend because it will be over!

See it if You want tol laugh your self silly with the drama of motherhood!

Don't see it if You are offended by the profanities caused by child raising.

See it if So very clever and entertaining. Anyone with children can relate.

Don't see it if You are uptight about profanity.

See it if You love to laugh and and have a sense of humor about either raising children or about your own childhood.

Don't see it if You dislike f bombs.

"Dunlap and Stotts have composed a smorgasbord of toe-tapping songs to accompany their journey, which feels more like a revue than a full book musical...Berliner maintains a lighthearted, comical tone throughout...Even through the blinding glitz of its manic showmanship, 'MotherFreakingHood!' cannot help but betray the creepy classism that undergirds the mommy-industrial complex...If you can get beyond the eugenic undertones, this musical is a hoot."
Read more

"A fun and fast-paced comedy that celebrates the joys of parenting but doesn’t gloss over the unglamorous parts...Though it acknowledges those realities and others, it doesn’t probe them with too much emotional depth or move beyond its identity as a lighthearted farce. The songs are frothy, airy, and easily digestible, and it’s clear that laughter is the main goal...The three leading ladies are delightfully comic and show off their powerful pipes with the belt-heavy score."
Read more

"A bawdy bunch of songs laced with an abundance of four-letter words, a dose or two of scatological language, and a curious interest in bodily fluids...There is nothing new in the musical...The music is engaging though unremarkable and sometimes derivative...The book and lyrics are the stuff of TV sitcom...The best part of the musical is the cast...Their ability to interpret the lyrics and deliver their songs is enjoyable and rescues the rest of the musical from the mundane and deplorable."
Read more