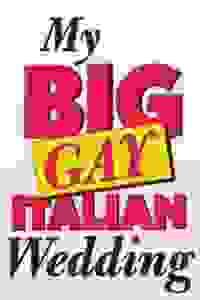 An unapologetically derivative play with music, this comedy seems to borrow liberally from the hit film 'My Big Fat Greek Wedding' and Off-Broadway's long-running 'Tony and Tina's Wedding.'

'My Big Fat Italian Wedding' satirizes the controversy surrounding same-sex marriage while drawing on larger than life gay and Italian characters. Anthony, a gay Italian-American from a large chaotic family, wants to marry his boyfriend Andrew in a traditional Italian ceremony. Anthony's overbearing mother won't give her blessing unless Andrew's estranged mother also gives her blessing and the ceremony is performed by a priest. Matters are further complicated by Andrew's ex-boyfriend, intent on breaking up the couple.

See it if you enjoy gay themed plays

Don't see it if you are anti gay

See it if Have a light evening

See it if You like sitcom type humor with over the top characters.

Don't see it if You are annoyed by gay stereotypes and cliches.

See it if You love sitcoms! I really really liked it..it was LOL many times!

Don't see it if You don't want to see gay over the top humor.

See it if you enjoy gay themed plays

Don't see it if you have a problem with Italians or gays.

See it if Want to have a good time

Don't see it if You're not a free spirit

See it if You like dry humor. Love to laugh very funny.

Don't see it if Your not into funny shows. If u have an issue with gay men then dont c it. I mean the names in the title.

See it if you enjoy shows about relationships and life.

Don't see it if you have a problem with Italians or gays.

"Wilkinson's hackneyed plotting is matched by the clichéd characterizations, from the bitterly squabbling semi-butch lesbians to lisping queens to Anthony's big-haired female relatives. The dialogue is equally predictable, filled with Italian invectives and some ethnic slurs that would make Archie Bunker proud. And the director's lackadaisical production does the play no favors."
Read more

"Feel like a bawdy, big-haired romp? Well, come on down. Don't care if it's a bit derivative? You've come to the right place. Mind enough stereotypes to make an Italian-American anti-defamation activist weep? Hop over to St. Luke's Theatre...And yet, deep down, it's got heart. This off-Broadway production is really just a big, sloppy same-sex smooch, wrapped in a gooey cannoli."
Read more

"Everyone is going to have his or her favorite moment in My Big Gay Italian Wedding, the insanely funny and fun confection playing in a church basement on Restaurant Row. The mixture of the sacred and profane, the ultra-serious and ultra-silly makes this the perfect play to see on a humid summer night."
Read more

"Parodying the 2002 hit film My Big Fat Greek Wedding through the lens of same-sex marriage, the camp comedies are both funny and relevant, with heartwarming messages about gay rights and wrongs, friends, families, and forgiveness, which underlie the hilarious high-jinks."
Read more