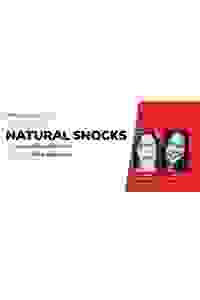 The WP Theater presents this darkly comic solo show, in which an unnamed woman is forced into her basement when she finds herself in the path of a tornado. Obie Award winner Pascale Armand.

Trapped there, she spills over into confession, regret, long-held secrets, and giddy new love. But as the storm approaches, she becomes less and less sure where safety lies — and how best to defy the danger that awaits. "Natural Shocks" marks the New York return of Lauren Gunderson, the most produced female playwright in America today.

Don't see it if you want to avoid a miscast, contrived solo play [Armand's a good actress, but out of her element here]; you expect a potent #metoo play.

See it if you follow playwright Gunderson, like 1-person shows & are patient with ridiculous melodrama on a current topic, are ok with lying narrator

See it if you like 1 person shows about women's issues, philosophizing, a bit of humor and a person trying to cope with life's problems.

Don't see it if you favor 1 person plays that deal in depth with the character's problems, provide perceptive insights and maintain interest.

See it if you enjoy new and interesting plays.

Don't see it if the strange reality of the world is all too much for you. Read more

Don't see it if you don't enjoy one-person​ 4th-wall breakage story-telling, or productions having anything to do w/physical, emotional abuse, or violence. Read more

See it if you want to see a one woman show where she works very hard to entertain.

Don't see it if you want to see a well produced and directed show where you can identify with and care about the actor. Read more

See it if You have no interest in a play being believable. Nothing about this was authentic. The polite applause at the end was damning.

Don't see it if You value your time, and are not in need of a nap. The writing is abysmal, but better acting would have made it more acceptable.

“An issue play that wants to be socially meaningful, with a would-be shocking ending...If its storytelling worked, ‘Natural Shocks’ would land potently on multiple levels. Yet this show, directed by May Adrales...contains vast stretches of tedium...And its construction is awfully rickety...The perverse narrative function of the menace stalking Angela is to swoop in like a deus ex machina, attempting in vain to rescue the play.”
Read more

"An all-too-predictable 70-minute monologue by a battered wife whose husband collects guns...An example of what I call the theater of concurrence, whose practitioners take for granted that their audiences agree with them about everything and thus assert instead of arguing In addition to shedding no light on the complex problem of gun violence, 'Natural Shocks' is soporifically undramatic...Few things are more tedious than a plotless, preachy one-person play."
Read more

“Overall, the first half of ‘Natural Shocks’ doesn't provide enough detail for Angela to come across as a flesh-and-blood woman; instead, the script repeatedly harps on the same few points...The production design is the best thing about the evening...I won't reveal the outcome of ‘Natural Shocks’ except to note that it is thoroughly dispiriting, leaving one with the feeling of being lectured about a social problem for which there can be no real debate."
Read more

"Played by Pascale Armand, known for her Tony nominated Performance in 'Eclipsed,' Angela is the heroine of Lauren Gunderson's new one-woman play, 'Natural Shocks,' being given its world premiere by the Women's Project at the WP Theater. The play has previously been given over 100 staged readings in 45 states over a period of two months. As much as one wants to admire this tour de force for an accomplished actress, in its current form the play has several problems."
Read more

"For all my admiration for what the play has done, what it is actually about and the attention that it has brought to this grave subject, this is a very serious and heavy topic that a full production of the play gives short shrift in order to hold on to the element of surprise at the very end. The strong message of the play does not build with any real suspense until the end when the true figurativeness of the tornado approaching is fully revealed."
Read more

“The character Armand is given to play doesn’t make any sense, because Gunderson is withholding everything significant about her and her story almost the entire time; it’s no wonder she sometimes seemed to lose her place. There are all kinds of ways to build suspense, to twist plots and lay clues for an audience to put together later. But there’s a line where impressive sleight of hand tips over into outright betrayal of the audience’s faith—and 'Natural Shocks' crosses it."
Read more

“The play demonstrates an idea, the sad privacy of domestic violence and the horror of its public cost, but because of that big, late reveal, most of the time is spent weaving a somewhat plodding story of seeming non sequitur...Armand is engaging, but the format of the play becomes tedious...and ultimately reveals little about its subject matter beyond the sheer act of its dramatization...The writing is nonetheless taut and lively, and evinces great skill.”
Read more

"Gunderson walks the very thin line between a statistical call to action and victim blaming, in our country’s dead-serious epidemics of domestic abuse and gun violence...Armand’s performance transitions from the chatty energy of a woman determined to find shelter, to her increasing fear and panic...Gunderson’s 'Natural Shocks' raises important points about the need to take action in times of crises."
Read more