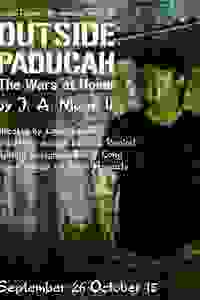 View in admin
Outside Paducah: The Wars at Home
NYC: East Village
87
Score it Scored!

Outside Paducah: The Wars at Home NYC Reviews and Tickets

Poetic Theater Productions and the Wild Project present J. A. Moad II's solo play in which the toll of war reverberates across three generations of Americans.

A seven-year-old boy struggles to make sense of the screaming in the night after his father returns from Afghanistan. A 50-year-old man works to rebuild his life as he wrestles with the memory of an idealistic son—a teenager turned Marine who came back from Iraq wounded, disillusioned, and broken. And at a bar in the rust-belt remnants of his hometown, a former soldier’s midnight encounter brings the past and the present into an explosive, searing reality.

See it if You want a serious evening of theater highlighted by excellent acting. I see a lot of theater and this one man show was quite good.

Don't see it if You want to relax w/lite fare.

See it if your favorite part of history is Story. In this story three distinct generations of Americans emerge full blown from one artist's psyche.

Don't see it if you're looking for escapist entertainment. Read more

See it if You can handle tough topics about masculinity, war, and the ways war can affect generations in families.

Don't see it if You don't like crying, or aren't into media that makes you feel and think. Ha!

See it if You want stark, honest and intense view into the lives of those we ask to risk their lives for us, and the toll it takes on them.

Don't see it if You're in the mood for something light and frivolous and/or lavishly produced.

See it if You care about unsung heroes and rare narratives.

Don't see it if If you can’t handle feeling something poignant.

See it if You want real insight, beyond cliches, into the lives of combat veterans and their families.

Don't see it if You're looking for something light and humorous. It has a few subtly comic moments, but this is a heavy play. Read more

See it if you want to explore how our military-industrialized, racialized society especially affects veterans and their families through generations.

Don't see it if you don't want to be moved to think about how our country treats veterans as disposable components. Or if you just want a comedy show. Read more

"Such schmaltz is liable to give you a toothache with its saccharine overload. Moad is really at his best when his language is saltier. That's why the third act, 'Quittin' Meth,' is the strongest of the three...Director Leah Cooper works to illuminate Moad's language in her bare-bones staging...Whatever the faults in Moad's performance, one has to admire his drive to bring a vitally important subject to the stage, one that is frustratingly underrepresented in our theater."
Read more

"Sober, somber and overall compelling...In terms of the atmospherically detailed writing and Moad’s enjoyably intense performance, 'Quittin’ Meth' is the most powerful of the program...Moad II is a former U.S. Air Force pilot and has a distinguished career as an academic and is not an experienced theater practitioner. 'Outside Paducah' is a passionate and fitfully engrossing work that reflects his noble intentions of celebrating those who fought in these controversial and traumatic battles."
Read more

"Moad is a stronger writer than performer. Each act succinctly gets its story across without too many expository details and conveys the emotions of the characters without being over the top, but there isn't much more that Moad adds that you can't get from the page. His delivery is fairly similar in all three...Though Moad is not the most compelling performer, the production elements help mask this."
Read more

"The strength of Moad’s writing lies in the messy emotions that shift to the fore: uncertainty, desperation, sorrow, resentment and pain. There is an impressionistic, almost stream-of-conscious quality about them that, helped by Leah Cooper’s tight direction...As an actor, Moad vividly embodies the characters...The final portrait of a veteran who has become a barfly plumbs the depths of confusion and misery that the long wars have wrought on those who have served in the military."
Read more

“‘Outside Paducah’ explores the effects of America's recent wars on the men at home. It is searing and thoughtful without being political or toxic. Writer / performer J. A. Moad II creates 3 excellent stories told in first person: by a young son, a father and a veteran. Although superficially unrelated, they illustrate the complexity of veteran's experiences and their reentry into life at home. The show is bolstered by effective projections and music.”
Read more

“Gripping…Moad’s writing is deeply humane, creating characters that ring true and whose emotions seep into our consciousness…'Outside Paducah' marks playwright Moad's first time out as an actor. He made a spectacular debut, giving each of the characters a whole life and specific point of view…Credit goes also to Leah Cooper whose direction provided smooth pacing, with time to absorb the weight of what was being shared, without losing momentum."
Read more