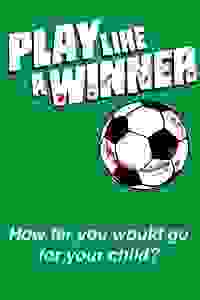 Part of the New York Musical Festival: A satire of the soccer mom world based on the award-winning play 'All About the Kids' by Caytha Jentis. More…

In the fiercely competitive world of girls’ soccer, how far would you go for your child? At curtain, Coach Nick lies dead at center stage, impaled by a corner flag, while a chorus of soccer players sings in his honor. Kathy, a soccer mom, steps forward to tell us the story of how all this began… An official selection of the 2017 New York Musical Festival Next Link Project.

See it if you enjoy great voices singing good songs. PLW is meant to be satirical, but school sports headlines have been crazier. Not enough laughs.

Don't see it if you want tight plotting. Act I is far superior to Act II. Too many unnecessary songs. Too much unnec'y swearing. Altho new, PLW feels dated.

Also I was engaged, but PLW felt off. It wasn't sufficiently enlightening or insightful or funny. Editing would help, but I just don't think the premise works. A special award should be given to Zoe Wilson (who plays the sole child in PLW) for both her acting and singing abilities.
Pet peeves: the mic'ing was too loud and the theater was too cold.
... Read more Read less

See it if It's cute and fun. Good music. Some great jokes.

Don't see it if Many of the cast are not up to their task, less in the singing than in the acting. Ending was abrupt and nonsensical. Some plot gaps.

Also A couple of songs don't need to be there.
The ending was over-the-top in a way nothing else on the play. Like the author ran out of paper. Needs work.
... Read more Read less

See it if You enjoy watching fueds between women. Act 2 is especially fun and campy w/ many laugh out loud moments. 2 leading ladies were great.

Don't see it if The setup takes too long & things don't pick up until the end of Act1. Show could easily be condensed to 80-90min & Would be much stronger.

Also Many songs in the first act sounded the same and the subplot with the 'gay' husband was strange and unnecessary.... Read more Read less

See it if You want to see a delightful, "adult" musical done by some very good voices

Don't see it if you want your satires to be satirical. This is much closer to reality. The book and lyrics fail to bring it over the top to absurdity.

See it if You want to see a hilarious satire of the world of soccer moms, with a razor-sharp script and great songs.

Don't see it if You're bothered by a cast that may not have the greatest voices, or you're a soccer mom who would be offended by such a caricature.

See it if you like dark comedies that are very relevant to today's world.

Don't see it if you don't like dark comedies or stories about soccer moms.

See it if you enjoy solid singing and an edgy story. Fun to watch, but needs some work adding more melodies and a different angle in the story.

Don't see it if you don't like repetative motives. The storytelling is static and lacking action. Needs additional twist, ex. adding kids perspective.

Don't see it if You don't particularly like dark humor

Also First act, set up for characters and moves a little slow. Songs Little mediocre and they all sound like.Second act much better. The cast is good and some really good singing voices. Worth seeing For the second act... Read more Read less

See it if want to explore the darkness in a suburban neighborhood. Are a soccer mom who needs to relax. Want a funny cast.

Don't see it if want a stronger second act. Dislike raunchiness and murder.

Don't see it if you want a sophisticated musical

See it if you like funny, cynical musicals. You can empathize with parents looking out for the best interests of their child.

Don't see it if You are looking for something serious.

Also I would score this higher once the plot holes are fixed. Otherwise, it was an enjoyable evening.... Read more Read less

See it if You like a funny musical that is a bit twisted. Opens with a death. Over involved sport parents exposed.

Don't see it if You are offended by cursing - there is a lot. And some of the gay references should be dialed back.

Also This was entertaining, but needs more work. To reach a larger audience (families), the language may need to change. I wasn't offended just aware that I wouldn't bring the grandkids.... Read more Read less

See it if i loved this show. the songs are greatwith. nick dromard was great as coach as were all the leads. was entertained & could c this make it

See it if you want to see a thoroughly entertaining satire about today's superheated, competitive kids' sports in suburbia. Hilarious, fun, a bit edgy

Don't see it if you don't like satire, cursing (there's a fair amount of it) and sex/gendered stereotyping (some of the "gay" comments were a bit offensive)

See it if you like new musicals, a wonderful cast, an interesting story full of contemporary issues and great direction.

Don't see it if You only like to go to revivals of shows you've seen before!

See it if You love campy comedy musicals!

See it if you want to laugh

Don't see it if you are in a cynical mood

Don't see it if You want a serious musical/play.

See it if you like darker satirical comedy, playful and clever lyrics and great music.

Don't see it if you can't relate to or want to explore the darker side of suburban life.

See it if You are a parent or ever wondered how for you could go for your child.

See it if You want to see suburban soccer moms duke it out for dominance in fabulously satirical song and choreographed routines.

Don't see it if You are offended by writing that includes jokes about being gay, or you are tired of seeing desperate housewives vie for the man's attention

See it if you like dark comedic musical theater.

Don't see it if you don't appreciate commentary on the suburban housewife/househusband.

See it if You are a parent, or have been parented.

Don't see it if You don't enjoy keen satire!

See it if you want to see the everyday turn into the absurd.

Don't see it if you aren't willing to consider the dark side of parenting in the upper-class suburbs.

Don't see it if You don't like bad language

"'Play Like a Winner' is the kind of musical comedy that sucks you in whether it’s your cup of tea or not...With book and lyrics by Erik Johnke and music by David Wolfson, this is a well-polished, occasionally foul-mouthed caricature of suburban soccer-mom life, aimed squarely at that demographic...
read more
Get Alerts Alerts On Alerts Off
"The subject lends itself well to dark satire...But Erik Johnke (book and lyrics) and David Wolfson (music) have not yet struck the comic tone that, like good satire does, unearths buried truths beneath the surface of the material. As of now, 'Play Like a Winner' leans on simple melodies and crud...
read more
Get Alerts Alerts On Alerts Off
Theatre Reviews Limited
"The book and lyrics are not clever enough to produce the undercurrents of a true satire but rather remain on the surface with a loutish book and relying on vulgar lyrics to produce laughs...The music is unobtrusive and produces some pleasant melodies but at times does not support the intent of t...
read more
Get Alerts Alerts On Alerts Off
“The cast is blessed with powerful voices and sound terrific on David Wolfson's score. They also managed to create moments of hilarity from the script and lyrics by Erik Johnke…What’s lacking is strong comedic choices and a devilish sense of humor. The show needs to blindside you with a unique tw...
read more
Get Alerts Alerts On Alerts Off