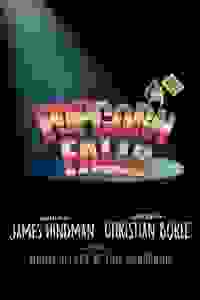 Welcome to Popcorn Falls, a small American town whose only claim to fame – their namesake waterfall – has dried up. Now bankrupt, their last chance is a large grant that can only be used if the town produces a play in a week. Led by the Mayor and the local handyman, the enterprising townsfolk try to rise to the challenge and prove that art can save the world.

The production will be directed by two-time Tony winner Christian Borle in his New York directorial debut.

Don't see it if You don't like actors playing multiples roles nor farcical​ stories. Small production.

See it if Clever concept. Both actors do a great job at playing multiple roles.

See it if you loved The 39 Steps. 2 actors play many male/female parts. "Come on, town, let's put on a show." I didn't laugh. All male prodn. Nice set

See it if you like a heartwarming and upbeat story about 2 people who help save a small town. These two actors take over 24 roles very cleverly.

Don't see it if you like serious drama, sophisticated comedy or lavish sets. Read more

See it if Story is funny, two actors playing more than one part. It's alot of Fun.

Don't see it if If you want a serious play. Read more

See it if A mayor and a handyman are forced to put on a show w/o any actors. Very clever circuitous plot. Inside all the bluster is a dramatic element

Don't see it if Not slapstick or vaudeville, just two game actors with good material. At a brief 75 min., there's room for more development.

See it if You like shows with two good actors playing lots of different roles.

Don't see it if You don't like two characters playing a. whole town.

"Not so much a laugh riot as a laugh scuffle. It’s rare that a play manages to be both predictable and confusing...But as directed by the Tony-winning actor Christian Borle — maybe a bet was lost? — 'Popcorn Falls' is also almost charming...The actors are enjoying the material and enjoying each other and their zippy enthusiasm is reasonably infectious...But art — even flippant, sweet-natured, intentionally farcical art — can stand to be better than this."
Read more

"The most entertaining, and awe-inspiring, parts of this play were during the 'play practice' where Souhrada takes on all of his roles...These scenes are when Souhrada's genius shows through the most...The rest of the plot is pretty straightforward...For a directorial debut, Christian Borle took on a beast. This play required expert direction to be executed properly, and Borle rose to the occasion...'Popcorn Falls' has all of the components required for a hit."
Read more

"Heller also has to play the straight man in a story that flirts with sentimentality from time to time, but happily never strays too far off its fundamentally farcical course. Borle keeps the pace brisk and the tone playful...It’s not hard to root for them; at about 80 minutes long, 'Popcorn Falls' never wears out its welcome. In a flash, we’re returned to the real world, grateful to Hindman and Borle and the dexterous performers, and fake vermin, for the reprieve."
Read more

“With Adam Heller and Tom Souhrada, ‘Popcorn Falls’ works valiantly to create a multitude of characters in a very far-fetched story. Unfortunately this is not ‘The Mystery of Irma Vep’ where the quick changes take your breath away. Mildly amusing, ‘Popcorn Falls’ was not even serving popcorn in the lobby at the performance under review, which might have added to the ambience.”
Read more

“This is one wacky, fun filled absurd adventurous two-hander...With the clever use of a chalkboard designating scene locations; a piece of this n’ that...we get to meet many of the zany residents of Popcorn Falls. On some levels think ‘Noises Off’...Wackadoodle script...This twosome are a perfect pair of well seasoned actors who transform and move at lightening speed, assuming characters with a wink, accent, walk or speech pattern...Delightful fun."
Read more

"Are all these characters ridiculously familiar? Certainly. Is the plot a mashup of every comic skit we've ever seen? Of course. But none of this takes away from the sheer joy of watching two veteran actors ply their trade under the skilled direction of the multi-talented Borle...While Heller makes Mayor Trundle both believable and sympathetic. Not every joke hits its mark. A few even fall quite flat. But overall, the comic hilarity of this farce carries through until the triumphant end."
Read more

“An actor’s dream of a play...Charming, funny and clever evening...2 actors play all the roles. They are smashing...Each character is simply but clearly defined. And they have to be because it’s a fast-paced script with the occasional group scene that has the two actors playing multiple characters at once...Borle did a magnificent job in his freshman directing effort..It proved that really, with great acting and writing, and a good pace, you don’t need a lot of extras. Kudos to all involved."
Read more

"'Popcorn Falls,' wildly and most wonderfully directed with brilliance and bravado by Christian Borle had me right where the show wants me, because its smarts exist in that very opening messiness, and that hook is precisely what makes this play by James Hindman such a tremendous joy and surprise...For a hilarious comedy, it truly is wonderfully detailed and drenched in emotion while never losing its wink and wet nod to the theatre audience.”
Read more