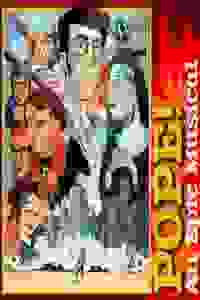 Part of the New York Musical Theatre Festival, this new musical comedy is a comic-book style 'epic' that chronicles the battle between a young Pope and the Archbishop who will stop at nothing to replace him.

'Pope! An Epic Musical' is an award-winning musical comedy of heroic proportions. It tells the tale of an idealistic, rock-star Pope, and his ambitious nemesis, the Archbishop, who relentlessly strives to wear the Pope's mitre. In this comic book world, the papal masses are charmed at first, but the Pope soon learns that a few well-placed enemies can overpower a few million fans. When the tyrannical Archbishop sweeps in and seizes power, the world cries out for a hero…and only the Pope can answer the call. Good and evil collide in this rambunctious, Shakespearean power struggle where lines must be drawn, sides must be taken, and confrontations must be musical.

See it if You can laugh at religion.

Don't see it if You're turned off by mockery of religion or by really repetitive melody.

See it if you're a comedy nerd and don't mind low production values.

Don't see it if you're expecting a sharp evisceration of religion a la Book of Mormon. Read more

"It's wacky. It's a family affair. And it's proof that the musical is not dead. 'Pope!' uses a light story—an earnest young man becomes pope, only to be brought down by a manufactured scandal, then stages a comeback—paired with classic stage elements that make musicals fun and entertaining. This romp is full of smart songs and snappy choreography. Be prepared for a few good laughs."
Read more

"Even with the thin plot and gimmicky jokes, the work of the director and actors can sometimes overcome weak material if they are on their game...The result is a production that feels like it's trying too hard...If exuberance and good intentions were enough, 'Pope!' might come closer to the epic experience predicted in its title. As it is, for this audience member, this one just didn't fly."
Read more

"An enjoyable treat from beginning to end, 'Pope! An Epic Musical' is the kind of show that reveals its full magic days after you’ve seen it, as you find yourself humming the songs or laughing when you remember one of the jokes. As divine as a comedy musical can get."
Read more

"A terrific and thoroughly entertaining soft rock score for 'Pope!,' a clever and hip musical...'Pope!' will lift your spirits, give you some big laughs, and charm you with its sweetness. It’s an irreverent but loving tribute to the eternal fight between good and evil and the redemptive power of forgiveness. Done tongue in cheek – taking aim at religion, tabloid reporters, robots, faith, God and 'The View,' it is played for real with humor that sometimes borders on the ridiculous."
Read more

"Though it flirts with grown-up irreverence, the lively tuner is a juvenile romp that should appeal to fans of television cartoons...Because of peppy performances, inventive direction by Greg Moran, and a promising score by book writer–lyricist Justin Moran and composer Christopher Pappas, 'Pope!' is a cheerful, zany trifle."
Read more

"This thing is just fast-paced, cleverly designed fun. Nothing in it, especially the Catholic hierarchy is intended to be accurate. By the same token, do not expect the moments of a cappella religious-sounding music to be as tonal as you expect. The vocal approximations work, because the whole thing is a bit 'off' on purpose...'Pope! An Epic Musical' is that oddly delightful mix of comic books, Monty Python-esque satire, foolishness, and good ol’ 'innocent goodness defeats calculating villainy' destined to make you leave with a smile even as it doesn’t bear much in the way of close examination. So, go laugh it up."
Read more

"'Pope! An Epic Musical' only superficially touches on contemporary political issues, preferring to tell a slight and resolutely upbeat comic-book story...A fun romp with numerous up-tempo and catchy, if a bit same-y songs throughout... While it’s a great little, bare bones — if overlong — musical featuring a company of decent voices, the lack of edgy contemporary commentary and its soft and deliberately simplistic storyline disappoints."
Read more

"The musical is a love letter that follows in the path of their comedy forefathers and, at the very least, keeps its audience laughing during the somewhat ludicrous plot twists. Moran's score is the star of the show; it is as infectiously tasteless and bubbly as anything that Mel Brooks has composed lately...There is a lot to like, and laugh at, while immersing oneself in 'Pope! An Epic Musical'. Take the journey while you can—you'll leave the theatre humming to yourself for a change, even if you feel slightly silly while doing it."
Read more