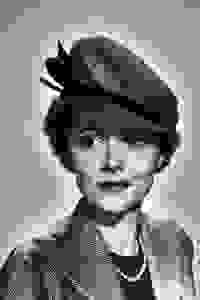 Posting Letters to the Moon NYC Reviews and Tickets

A romantic, comic, and touching portrait of life during the early 1940s featuring readings of wartime letters between Oscar-nominated actress Celia Johnson and her explorer and writer husband Peter Fleming.

Their daughter, Lucy Fleming, alongside her own husband, Simon Williams, reads these touching and amusing letters that tell of Celia’s experiences during the war: coping with a large isolated house full of evacuated children, learning to drive a tractor, dealing with rationing, holidays in Cornwall where she took to surfing, and all the while accepting offers, when she could get away, to act — for David Lean, Noël Coward, wartime propaganda films, and ultimately starring in the classic film "Brief Encounter."

See it if you are interested in British life during WWII. Engaging reminder of sacrifices by brave, good people. Letters well read. Some projections.

Don't see it if you want somethg big. PLTM is modest in prodn values, but packs a punch. Truly lovely. Perfect for Anglophiles. Humor/loss/love/drudgery.

See it if If you like a well written, well acted play that is based on letters written during war time. Very moving

Don't see it if If you did not like A R Gurney s love letters or a show like it.

See it if Brits Off B'way entry. Lucy Fleming (and husband) reads wartime correspondence, with projections, between her famous parents.Lucky 2 witness

Don't see it if This could be "Love Lettres 2" with its monologues, if it weren't for the historical weight of Lucy Fleming delivering a timeless portrait.

See it if You are interested about letters written during WWII that tells about life during that time in British.

Don't see it if If you have no interested in time period. Just reading and some pictures shown. Read more

97
Romantic, One of the most delightful evenings of theatre i've had in a long time, Exquisite, Enchanting, Absorbing

See it if you enjoy epistolary theatre. Lucy Fleming and her husband, Simon Williams are a joy portraying Lucy's parents.

Don't see it if you do not enjoy epistolary theatre or if you need lush scenic design. This piece is for those who love words.

See it if you like gentle love stories.In this troubled time, I think we need to remember that life goes on, love & honor matter.

Don't see it if you don't like small, intimate stories.

See it if You're interested in two very sweet actors sharing a story that's personal to them.

Don't see it if You don't want a production that only amounts to a staged reading of an unfortunately dull tale.

See it if you are interested in a very simple telling of a love story told primarily through the reading of letters.

Don't see it if you are looking to have a similar experience to Gurney's masterful "Love Letters",or are not looking for what is basically a staged reading.

"Metro area audiences will relish the opportunity to see this show that is an insight into the lives of two very interesting people and a reflection of the times...Lucy Fleming and Simon Williams' performance is splendid. They capture the genuine feeling of the letters and provide an informative narrative to round out the story. There are also projections that add to personal and historical moments."
Read more

"Anyone looking for a civilized ninety minutes of adult amusement can't go wrong with this lovely, casual piece...That these letters are being read by Celia and Peter's daughter and son-in-law only adds to the poignancy of the experience...Both stars are relaxed, engaging personalities, with the effortless charm of longtime professionals. There are many more spectacular evenings in town, but not many as enjoyable."
Read more

"It’s a rare and heartening experience to get reacquainted, on a quite personal level, with British film star Celia Johnson...You couldn’t really call this production a play. It’s a reading, supplemented with interjections and projections. However, this particular pair brings two extraordinary lives back to life, and you get to share in the intimate memories, amid an audience of rapt listeners. If this is not drama in the classical sense, it comes close enough."
Read more

"The epistolary 'Posting Letters to the Moon' may, on the face of it, make one think of A. R. Gurney's 'Love Letters' or Helene Hanff's '84 Charing Cross Road.' But unlike those two memorable plays, 'PLTTM' as 'compiled' by Lucy Fleming, whose mother was the British actress Celia Johnson and whose father Peter Fleming was a travel writer--as well as the older brother of James Bond creator, Ian Fleming--never really tells a story nor conveys what her parents' relationship was like."
Read more

“’Posting Letters to the Moon’ isn’t a play. It’s almost the format of a lecture...However, unlike a rigid lecture, this show carries the energy of an afternoon chat over a cuppa...The letters are witty and full of charm, joyous even during the darkest times...My main criticism of the evening is of the music...It doesn't enhance the storytelling...I wish there'd have been more of a complex, dramatic moment with the music, or simply none at all...This is nevertheless powerful storytelling.”
Read more

"A slight epistolary play, both amusing and touching…Within the interstices of the letters, filled with obviously sincere terms of endearment that attest to their mutual love, we hear of the kind of everyday activities and events that filled Celia's days, along with comments on the films in she was acting. Laughter strikes now and then, especially when something off-color is discretely alluded to….Most interesting…are the letters describing the filming of 'Brief Encounter.'"
Read more

“It is tender, occasionally funny, and quietly hypnotic. And it’s all told via letters...The letters are carefully curated for maximum emotional punch. The duo has a chemistry all their own, which makes this family affair even more touching...What makes ‘Postings To The Moon’ so memorable is their deep love for each other. It shines through on every page...The 'Postings’ tone is self-aware and hopeful. This slyly humorous and genuinely compelling story has us cheering for the Flemings.”
Read more

“Through letters the audience gets an understanding of exactly who Celia and Peter were. The correspondence offers insights...Through the use of still photographs and the excellent delivery by Williams and Fleming, the show brings forth not only the feelings Celia and Peter had for one another, but also the dangerous times in which these letters were written...If there is any complaint about the show, it’s that it feels too short.”
Read more