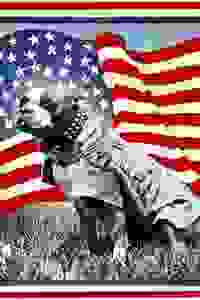 Friends Always Creating Theatre presents this new family musical inspired by the true story of Stubby, the most decorated dog of World War I.

Sergeant Stubby was the only canine to be nominated for rank, and then promoted to sergeant during combat. Stubby served for 18 months and participated in 17 battles on the Western Front. He saved his regiment from surprise mustard gas attacks, found and comforted the wounded, and once caught a German soldier by the seat of his pants, holding him there until American troops came. After returning home, Stubby became a celebrity, leading and marching in many parades across the country. This new musical tells Stubby's epic tale with a human actor in the lead role.

65
Told a very pleasant true story that i had never heard.

See it if if you enjoy nice stories. It's a lovely show to bring young children to.

Don't see it if you're looking for a sophisticated show for adults.

59
Tap dancing actors in dog makeup, soldiers with ace bandages on their legs not sox.

See it if You are a child, or you're an adult who has children with you, or if you are suffering from dementia, or are bringing someone who is..

Don't see it if You can't suspend your belief that Actors are playing dogs, in dreadful makeup, tap dancing, to bad choreography sometimes in the dark. Read more

See it if You want a show to take your young children to that may teach them something about a small slice of history.

Don't see it if You want the Broadway experience.

See it if have nothing better to do.

Don't see it if you hate dogs and history

See it if you enjoy catchy music, a fun cast who clearly have a passion for theatre, and you want to have a great time watching a patriotic story.

Don't see it if you don't like singing and dancing or smiling.

Don't see it if You don't love Dogs especially portrayed by humans who are delightful.

See it if You want an evening of catchy tunes, good dancing, a warm story about a dog who served in WW1 and the soldiers who loved him.

Don't see it if You expect all the bells and whistles of a full blown Broadway production. This show is simple, to the point, and without frills.

"The story is so interesting and appealing, however, the direction is hard to comment on because the show is so over-choreographed. A lot of the cast has been cast for their dancing skills, which are impressive, rather than their singing expertise…The music and the melodies are likable, but the lyrics are so misplaced and plebeian that when you can hear the lyrics you just want to scratch your head…The show feels like you are in a musical being done by a junior high. "
Read more

"A high-energy, action-packed production…It ticks all the boxes for a solid, informative, and entertaining experience…I would have preferred if the cast had microphones, as one loses a lot of the lyrics as the backing tracks sometimes overpowered the singers…But that said, it is a positive, uplifting true story that will appeal to children and keep the parents interested, as well. It’s a beautiful story that brings this historic time to life for a new generation."
Read more

"An interesting musical...The actors who played the dogs in this show did an admirable job of it. There was a childlike quality to their performances that seemed fitting for dogs. The story was moving in a patriotic way. The songs were very patriotic as well...Older children would enjoy it...Anyone who loves history and/or wants to learn about an interesting chapter in history would probably like it as well."
Read more

"The story is a sure-fire crowd pleaser for dog lovers and history buffs, but unfortunately the sound design is a challenge the production fails to rise above. The quality of the pre-recorded music is consistently poor. The likeable cast, apparently chosen for their dancing skills, turn in earnest work, however their performances are broadly one dimensional, and their singing voices are difficult to hear without mics. "
Read more

"While the story is inspiring and full of heart, the shoestring production, directed by Mr. Dyville, didn’t quite do it for me. The show seemed to be missing some ‘oomph’ and vigor and promoted little thought about the subject and times…The production also felt amateurish at times, with the recorded music drowning out some of the lyrics and a static set that never changed with the scenes. The talented cast, with painted faces, gave it their all. "
Read more