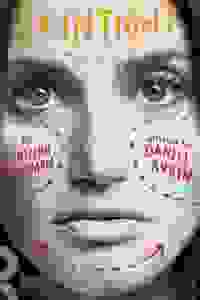 See it if you're interested in classic trade of old men's wealth for youthful beauty. Discussion, tho, isn't well-balanced. Funny dialogue is forced.

See it if you want to see a sometimes funny, provocative & revealing play about youth, beauty & privilege that barely penetrates the surface.

Don't see it if you expect Idina to sing (mercifully, she doesn't); very frank sex talk will turn you off; you need at least one likable/relatable character

Don't see it if Author sadly glides on the surface of many serious issues causing drama to resemble a Calvin underwear print ad - pretty, vapid & remote

73
Though an uninspired sitcom, who knew that idina had these comic chops?

See it if You like argumentative plays that consider both sides of a timeless issue — in this case, a relationship with a big age gap.

Don't see it if You’re expecting Harmon’s usual level of relevant, nuanced plays. This is more predictable & cliched, albeit absorbing.

See it if you're interested in an exploration of youth, beauty and family that gets you thinking and makes you examine your own beliefs on the matter.

Don't see it if you'd be frustrated by a show that presents all points of view equally and forces you to consider they all could be right.

See it if you are a fan of the writer and/or Indina Menzel, who gives an overacted yet amusing, solid performance. Good comic timing.

Don't see it if Not a play to sink your teeth into - wanted more. The play is comedic but more substance would have made it more substantial/memorable.

See it if Society demands for beauty, youth, perfection and story of jilted woman going "home" to be comforted by her gay, famous father intrigues.

Don't see it if Don't like explicit talk, gay themes, ageism, family drama/relationships. Expect to care for any character or don't LOVE Menzel.

"You anticipate a sleekly enjoyable romp: well made, sexy, with a bit of substance yet light enough for a summer evening. A low bar, perhaps, but 'Skintight' clears it...But something’s off, and it’s not the cast...The smoothness of the staging, by the director Daniel Aukin, will keep you from noticing that more and more of those stretches are stretching by without much build...'Skintight' stops well short of exploring, let alone indicting, its characters’ vapidity and historical amnesia."
Read more

"Harmon gets good mileage out of Jewish anxiety and discomfort; he is not afraid to make his main characters intensely abrasive. And Daniel Aukin’s staging gets laughs where it should...But the play is so tightly corseted by its central concern—'What is so great about hot?'—that its characters don’t have enough room to breathe. It makes good points, but as a human story, it seldom digs beyond skin-deep."
Read more

"Harmon certainly has a talent for crafting bitingly arch dialogue that's on ample display here. But this work never quite comes together. The evening feels diffuse and overlong, filled with scenes that offer some laughs but peter out with little narrative momentum...Seems designed more as a delivery system for bitchy one-liners than a comic examination of the all-important role of beauty in our lives. The performances are a mixed bag."
Read more

"For a play with serious matters on its mind, 'Skintight' is packed with jokes — droll ones, smart ones, silly ones, and some that are quite moving. The men may have all the laugh lines, but Menzel is marvelous at giving Jodi’s annoying smothering-mother the plaintive air of someone who feels completely at a loss in a world she never dreamed of...The play has no plot, in a conventional sense, which makes it feel loose and baggy...But let’s not take all the fun out of this smart play."
Read more

“As a non-singing actress, Menzel is only intermittently successful and so is the play, but both are sometimes sexy and often quite funny...Harmon knows how to fill the stage with people on the verge of nervous breakdowns, and his one-liners are priceless. His problem is that he doesn’t know when to stop writing and give his characters the room to live and breathe...You laugh and you nod at the cleverness of the work, but eventually you long for the talkathon to end."
Read more

"Fitfully amusing but blurry...Joshua Harmon is a smart playwright with a keen ear for zingers...Guided by director Daniel Aukin, the likable cast capably breathes life in Harmon’s unlikable characters. They verbally spar about youth and beauty, wealth and privilege, familial expectations and various other topics. All of the hot-button issues and flashes of flesh don’t quite add up to a satisfying evening...The play never gets more than skin deep."
Read more

"The role fits Menzel like a glove and she gives a fine enough performance. The play offers food for thought about society’s shameless attraction to youth and beauty, the mutability of one’s identity and the aloofness of those accustomed to privilege. That being said, 'Skintight' is too often static, slow and messy. It is not on par with Harmon’s other recent comedies."
Read more

“Funny and provocative...The play has something of a split personality; trying to be both a black comedy and a social commentary. On the one hand the characters seem too cruel and utterly unlikeable to be real, but in those moments when the author digs beneath their vein skins, it resonates...The play’s success goes to the fine ensemble under Aukin’s incisive direction...Harmon’s humorous insights on our obsession with youth and beauty...bares some ugly truths that speak to us all.”
Read more