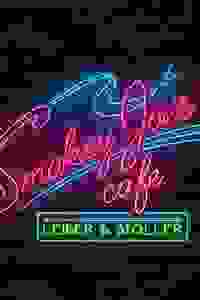 Their generation-defining songs climbed the Billboard charts and provided hit after hit for icons like Elvis Presley, Ben E. King, The Coasters, and The Drifters. With themes of love won, lost, and imagined, their songs touched global audiences with wit and emotion.

See it if You want to see some great singing and dancing with basically zero plot or storyline. It’s a revue. No dialogue. Just good music.

Don't see it if You want anything more than song and dance. This is one staged number after another, nothing really connects them other than the cafe. Read more

See it if Loved every toe tapping minute of it. The talent of the singers and musicians covered every inch of the theater. Will see again!

Don't see it if You don’t like revues. This is all songs non stop.., no plot.

See it if Nonstop musical revue. Great singing and dancing by a talented 9-member cast plus band. Good selection of songs & transitions between them

Don't see it if You want a narrative. There is none.

See it if singing and dancing appeal. The performers are wonderful. The songs are mostly familiar. The staging is engaging and varied. A fun evening.

Don't see it if you expect plot or characters. Each song is its own little story but there is no overall through line of personality or role.

See it if This is all Singing, Music and Dancing. You will see some very talent sings.

Don't see it if If you want a story. Read more

See it if You love doo-wop music sung by a capable cast, and are seeking very lighthearted fare.

Don't see it if You dislike revues or think that because this played 5 years on Broadway, it’s something special. It’s slightly above average.

Don't see it if The venue has a poor track record for sustaining hit shows. Pity.

See it if you want to turn your brain off and just "have a good time."

Don't see it if you want to think or see anything original or inventive on stage.

"A show that badly wants to be liked, but in its eagerness it comes across as relentless and overly polished...It only occasionally slows down enough to breathe...Bergasse has quite an array of talent and professionalism at his disposal...The production errs on the side of caution, and that is an error, indeed...There are moments in the production when fresh energy breaks through, though, and they often occur when the show pulls back and goes for simplicity."
Read more

"As a showcase for Leiber and Stoller's breathtaking range, 'Smokey Joe's Cafe' is aces. If only the production had as much stylistic variety. The ensemble cast's vocal and dance skills are impressive, and the eight-member band sounds hot; but although the musical is entertaining, it is rarely emotionally engaging...As a clap-along experience for theatergoers of a certain age, 'Smokey Joe's Cafe' serves the right stuff. But those looking for heartier fare may leave feeling hungry."
Read more

"Infectiously fun...Perfect lighthearted summer entertainment...The production's propulsive, nonstop energy barely leaves room for the audience, let alone the ensemble, to catch their breath...There's no narration or particular structure, just one terrific number after another, but the diversity of the musical styles keeps the proceedings from feeling repetitive...There are a few missteps. The musical staging can occasionally get a bit hokey, but that's more the exception than the rule."
Read more

“No plot, characters or dialogue — just songs...The production represents ‘Smokey Joe’s’ at its best, with nine talented performers and a swinging band leading the audience through a pleasant retrospective of baby boomer hits...While one may appreciate its classic songs and feel-good spirit, a sense of monotony kicks in before too long. Recognizing this, Bergasse has removed the intermission and emphasizes hyperkinetic movement and audience interaction.”
Read more

"A remarkably enjoyable affair thanks to a powerhouse cast and reimagined staging...It also helps that these are some of the greatest songs from the American pop repertoire, still capable of stoking teenage dreams and salving emotional wounds...It's a simple concept that works extraordinarily well...The jukebox musical is here to stay, but 'Smokey Joe's Cafe' reminds us that there is a way to do it that minimizes cringes and maximizes smiles: by going back to the basics of the revue format."
Read more

"Despite the powerhouse voices, savvy performance skills and slick dance moves the audience is treated to throughout the 90-minute production, the feel is that we're watching a group of friends letting off steam after another hard work week...Whether these songs are a fond part of your memories, or if each new tune is a fresh discovery, this wonderfully realized production of 'Smokey Joe's Cafe' will send you out to 42nd Street humming a full medley of them. What a fun, fun night out."
Read more

"The liveliest parts of this songbook revue are structured around the quartet consisting of Dwayne Cooper, John Edwards, Kyle Taylor Parker, and Jelani Remy...A high-volume, high-pressure entertainment -- barreling through forty songs in ninety minutes, often failing to stop for even a bit of applause -- riding a wave of energy so insistent that it can leave one enervated...In any case, summer is upon us and there may be an audience for this sort of shiny, empty bauble.
Read more

"A slick entertainment packaged from nearly 40 of the team’s compositions...It is essentially the same jukebox show as its earlier incarnation...A feast of nostalgic ear-candy that is expertly dished out by a talented nine-member company...Trimming back the proceedings to a swift, intermission-free 90 minutes, they have reworked the winning song stack somewhat, but not appreciably so...The show unquestionably offers an entertaining romp through old-school rock ‘n’ roll."
Read more