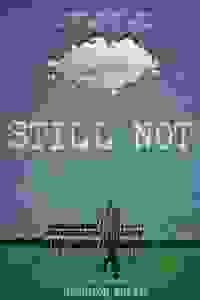 Part of FringeNYC: One Bench. Two Strangers. STILL NOT is an honest, comedic, skewed-romantic exploration into the traps of waiting for love...and the fear that it may never come.

FROM THE ARTIST:
* STILL NOT began as a ten-minute scene written for a class at Boston University. Over six years, as playwright Harrison Bryan’s perspective on life and relationships changed, this skewed-romantic comedy evolved into a 75-minute story of six days, exploring themes of fate, desire, dependency, and progression. STILL NOT stars the playwright, Harrison Bryan, and Shelby Hightower. The two actors met in Boston, where they dated for three years before ultimately separating. They have remained friends, and with this production they face the rewarding, but often difficult, challenge of being artistic collaborators yet again.

“When I first started working on STILL NOT, Shelby, and I were just friends. Eventually we started dating, and as our relationship evolved, so did my relationship to the play and to the characters,” said Bryan. “We are not these characters, and the play is not about us specifically, but we certainly feel the weight of our history on the play - and its impact on our performances."

* “A declaration by two young performers that they are going to throw their hearts and souls into this profession and will carve out a permanent place for themselves in this industry. You can feel their optimism and youthful ambition pouring off the stage.” - NY Theatre Guide

* "STILL NOT is hopeful yet heartbreaking- practical yet idealistic. Harrison Bryan has a something special in his hands.” - Theatre In The Now

* Funny! But Heart-Breaking!...The play is dedicated to anyone who's ever been hurt - or healed - by love. May we all find inner peace - and share it with the world.

See it if You want a human, charming, lovely two hander about modern relationships.

Don't see it if You are expecting ground breaking new theater. This is simple and rewarding but its not innovative.

See it if you are young and like to examine relationships. It started a little slow for me, but got better in the second half.

Don't see it if you want a very dynamic, profound show.

See it if you are sensitive to the nuances of relationships. The dialogue felt totally natural and the show is flawlessly cast. Poignant with humor.

Don't see it if you are looking for lots of action. This budding relationship (or lack thereof) unfolds gradually as a guy and girl sit on a bench and chat.

See it if you have ever been in that awkward situation where you see someone that you really want to meet and get to know.

Don't see it if you don't believe in love and relationships.

See it if The actors are great, committed and connected to the characters and the well-written dialog, especially Harrison Bryan who is very charming.

Don't see it if The romantic story line is superficial. You never get to know the characters on a deeper level which makes the play seem long.

"The tension in 'Still Not' is present thanks to the great naturalistic dialogue constructed by playwright Harrison Bryan…The chemistry between the two is palpable...Direction from Rory Lance is delightfully specific in constructing these two characters' physical lives, differentiating their distinct ways of being while simultaneously providing them with numerous ways to connect."
Read more

"The chitchat becomes inane and repetitious, only serving as a vehicle for comedic overtones and situations. It is devoid of character development and dramatic arc, leaving one scene indiscernible from another. The two actors come as close to creating interesting characters as the script allows but lack the chemistry to provide and support emotional content...'Still Not' still does not reach its full potential and leaves the audience still waiting for something more."
Read more

"Barely any external reference to the world outside their cocoons is broached. The play’s dramatic arc, despite minor flare-ups into potential drama, is as flat as a day-old Coke...Neither Bryan nor Hightower is sufficiently believable or charming in these uninteresting roles. Trying hard to be natural they instead fall into mannered cuteness, the kind where every transition seems to have been given a subtext that the actors feel compelled to express physically."
Read more

"The play is fresh and offers a unique perspective that is not canned or cliche. It is quirky, very funny and the writing is clever and smart and at moments surprisingly insightful. Both actors were perfectly playing off each other and the chemistry is obvious...Director Rory Lance does a fine job directing these two players and getting the most out of this limited setting. Every motion seems true to the characters and blocking is straightforward but revealing."
Read more

"Nothing felt forced…There was an easy flow to the dialogue with gradual satisfying progressions…Rory Lance, the director, has done a beautiful job shaping each moment with care and precision…The two actors worked perfectly together. There was great chemistry, believable discourse, shared moments of deep empathy and commitment to the text, to telling the story. This is not a monumental life-altering play…This slice of life, haiku play, is a misty rainbow after the rain."
Read more