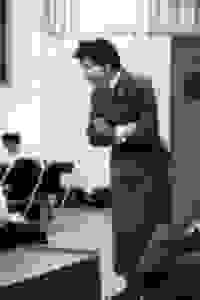 View in admin
Subways are for Sleeping
NYC: Midtown E
83
Score it Scored!

Subways are for Sleeping NYC Reviews and Tickets

The York revives this musical comedy where a reporter gets a new point of view when she goes undercover to get the scoop on an unusual group of New Yorkers: well-dressed homeless people sleeping in the NYC subway system.

'Subways Are for Sleeping' tells the tale of Angie, a reporter sent to get the scoop on a segment of NYC society that lives by their own rules. Going undercover, Angie learns how the carefree other half lives and begins to see there might be another way to experience the world.

The Musicals in Mufti Series presents three to five concert revival readings of underappreciated Broadway musicals for 10 performances each. "Mufti" means "in everyday clothes, without all the trappings of a large production," and each show is presented script-in-hand, with minimal staging

See it if you can get to the York. Everything gels: acting, singing, script, lyrics, tunes, staging. SAFS is dated, but who cares? It's delightful.

Don't see it if you need a good plot; this is silly, contrived. But charming characters & terrific songs.Strong performances. Did I mention, it's delightul?

See it if you'd like to see a rarely performed show with some great Jules Styne tunes, eager, enthusiastic cast overcoming odd,dated book,

Don't see it if you expect a fully staged production, not attracted to musical about the "quality" unemployed/homeless living temporarily on subways

Don't see it if a staged reading doesn't interest you. There's very little staging, and some moments really suffer for that.

See it if you want to hear a great Jule Styne score with clever Comden/Green lyrics.

Don't see it if you need to see a big, polished work. Actors are on book here, but they manage some terrific acting--even while connected to music stands.

See it if you like musicals; you enjoy the Mufti series; you like Jule Styne's work; you like intimate theater; you didn't get to see the original

Don't see it if for some reason you need a big, splashy Broadway musical

See it if curious about other shows by Styne; to see charismatic talented leading man Eric William Morris.

Don't see it if you're expecting a hidden gem. It's not bad, but it never convinced me that homelessness would be a viable option for these characters.

See it if you like musicals and have 2 free hours. Second act is delightful.

Don't see it if well, you can't it is over now.

"Morris' Tom is slick and humorous...Milo is quite adorable as Martha, showing solid comic chops...Josefsberg is a blast as Charlie...highlighted by his hilarious display of passionate urges...Ross' production, despite the heavy use of music stands, is fast and funny, featuring a talented supporting ensemble of six...May not be the best musical of the century, but the York's concert production is quite an enjoyable ride."
Read more

"An effervescent production...A sparkling treasure trove from start to finish, so much so that one wonders why it's never had a major remounting...A marvelous example of the kind of musical that flourished during Broadway's so-called Golden Age...Pure delight: lighter than air, quirky, sweetly romantic, and filled with spritely Styne tunes...It could hardly have a better cast...Directed with panache...Soars like a free-flying kite."
Read more

"Unfortunately, the original problem with the material has not been solved: Tom and Angie are just not very interesting. They have little or no back story and no outstanding characteristics. As was famously true in the original production, the show is stolen by the secondary leads. With their continually inventive schemes to get through each day, slacker Charlie who lives off his former friends and would-be nightclub performer Martha with her Southern accent are a total delight."
Read more

"Stuart Ross made excellent choices, and brilliantly directed this show with an outstanding cast...One of the highlights of this production was the inclusion of Styne’s amazing overture for the show as the projection of his hand written musical chart filled the screen. Thanks to the York Theatre for keeping the history of musical theater alive, and for producing new works and encouraging new writers!"
Read more

"A charming musical from the early 1960’s...Director Stuart Ross, who in 34 hours of rehearsal pulled together a show that felt fully staged...The biggest reason to go see 'Subways Are for Sleeping' — and passengers, you should be so lucky as to be delayed by track work — is to listen to the song gems in this musical...By show's end, this seemingly corny, charmingly kooky musical proves to not be dated at all. It is deceptively deep."
Read more

"Has a delightful score, an interesting book and lyrics by Betty Comdem and Adolph Green and a talented cast that makes you fall in love with them...Eric William Morris is a find...Stuart Ross directs this piece like a subway train, perfectly tuned, comedically well paced, to a winning finish...Jule Styne’s music shows blue notes, that drift off into satisfying musical endings. I would love to see this piece fully staged."
Read more

"A lively treat, thanks to an excellent, larger-than-usual cast and the entertaining qualities of the show itself. It adds up to a a welcome experience of rediscovery and pure fun...Some of the book is a stretch, but that is redeemed by plenty of funny lines, appealing romance, and the smart array of songs that Styne and his lyricists provided. As usual, The York has assembled a superb cast to bring the show to new life...The highlights come from this very engaged cast."
Read more

"I find it curious 'Subways' hasn't been revived before now. It has charm and more than a few worthy songs...Louis has a lovely voice, but performs with so little expression...Surely the character feels something else over the course of the story...Morris is appealingly animated throughout...Milo plays Martha as if the part were written for her...Josefberg is adorable...An actor of multi-faceted talent...The assembled cast is vivacious. Direction by Stuart Ross is zippy and evocative."
Read more