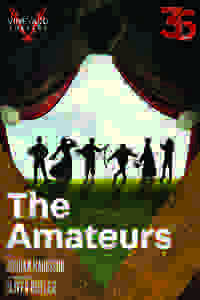 View in admin
The Amateurs
NYC: Gramercy
71
Score it Scored!

The Amateurs NYC Reviews and Tickets

The Vineyard Theatre presents this epic new work from Pulitzer Prize-finalist Jordan Harrison, where an intrepid troupe of pageant players races across medieval Europe, struggling to outrun the Black Death.

The arrival of a mysterious new actor sends Hollis, the leading lady, in search of answers that can only be found off-script...and soon one century’s plague begins to look a lot like another, more recent, one. Equal parts comic and heartfelt, 'The Amateurs' examines the evolution of human creativity in a dark age: when does a crisis destroy us, and when does it open new frontiers? Directed by Obie Award-winning director Oliver Butler.

See it if If you like good acting and 13th century type plays.

Don't see it if The show gets boring, confusing and slow. This piece should not have been brought to stage yet, needs a lot of reworking.

See it if Very slow start which jump starts in a clever middle section. Lead actress is strong but shows is still a struggle. Very meta.

Don't see it if You need a clear linear plot. Not interested in slightly avant-garde shows.

See it if Medieval theater troupe struggles with the black plague and reinventing themselves. Death and renewal in Noah's time, 1350, and 1985.

Don't see it if Act 2 (of 3) is a lecture where the "playwright" explains the historical context (why this play?) and how it relates to modern times. Read more

See it if you're interested in the how & why of theater, or what the evocation of a medieval plague might say to us about another, more recent plague.

Don't see it if quick tonal shifts in the theater give you whiplash. Read more

See it if You like heady plays that tackle big ideas through the telling of small, intricate stories.

Don't see it if You dislike works that try to express too many ideas, but never focus on a singular theme.

See it if you’re interested in seeing a meta exploration of character, and what it means to write a fully realized part—mixed in with a lot of quirk.

Don't see it if a traditional narrative is more your speed, or you prefer the fourth wall to stay in tact.

"A hilarious, slightly eggheaded, and strangely moving medieval backstager...A bit heady for a rollicking tragicomedy in which pratfalls and death throes are tumbled together, that is part of the play's unusual scheme...'The Amateurs' works by a kind of indirection. The magic happens, by design, wherever the playwright isn't pointing...The postmodern gewgaws are a bit of a decoy. They might work even better if there were fewer of them...The cast is a collection of Off-Bway treasures."
Read more

"Ambitious but inchoate new play...At the halfway mark, Harrison turns the action inside out with a meta theatrical flourish involving two of the actors...To some extent, this section of dramatis interruptus is effective. It has a texture of real life that the medieval sections do not, and it mirrors, in that way, the emergence of personhood that the rest of the show is meant to depict...For all its skill, the play rarely seems either more or less than self-conscious."
Read more

"I found myself won over...The stories are vulnerable, raw, funny, sad, and they allow us intimate access to the patchwork of experiences that shaped both playwright and play...Harrison’s heartfelt meta-monologue is the most affecting part of 'The Amateurs.' The play on either side of it is charming enough but less anchored in terms of its tone...Harrison is juggling several ideas here, but what keeps it all together is his heartfelt questioning of his own art form."
Read more

"While this breaking of the fourth wall ultimately proves more gimmicky than enlightening, it does at least provide a respite from the tedious goings-on in the main story...While the play features some clever moments...it mostly feels lifeless and heavy-handed...Unfortunately, despite the fine performances by the ensemble, the effective staging by Oliver Butler and the striking scenic and costume designs...this thematically ambitious effort feels a complete misfire."
Read more

"A frequently funny play about amateur actors struggling to put on a biblical epic...This in-and-out style of storytelling requires a lot of skill to pull off. Under the stewardship of director Butler, the cast and crew manage it...Harrison has captured amateurishness expertly. He has also dared to go deeper, digging into the cultural emergence of individuality. Some might fault him for taking on so much, but that's just what he should be applauded for."
Read more

"This business of playwrights kibitzing on their own work is becoming worrisome...Butler's direction can't really find any urgency or drama in these proceedings, but at least he has assembled an exceptionally appealing cast...The authorial intrusion seems almost an admission that 'The Amateurs' is a play in search of a reason to be. The story it tells should be steeped in horror, suffering, and the struggle for survival. Instead, what it offers is a postmodern shrug."
Read more

"Directed with brazen audacity by Oliver Butler, 'The Amateurs' boasts a top-notch design team...The players, all of whom are superb...We're entranced by Creighton's magical power to entertain us with stories of Harrison's youth...a metaphor for the AIDS epidemic in our lifetime...I ended up leaving 'The Amateurs ' loving my life and loving the theatre so I guess Harrison is on the right track. We should all have such self-awareness of who we are and our place in the world."
Read more

"Jordan Harrison's 'The Amateurs' is certainly an ambitious new play acted to the hilt by its cast of six. However, at times it bites off more than it can handle, at other times its anachronisms tear at the fabric of its story, and finally it goes out of its way to draw connections that the audience has already made. The play may need a stronger director than Oliver Butler has proved to be to pull this unwieldy drama into more satisfactory shape."
Read more