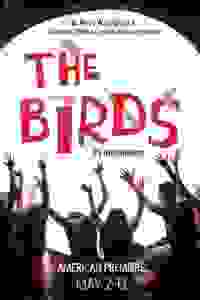 Following its world premiere at the Ancient Theater of Epidaurus and in Athens, Greece, this vibrant restaging of Aristophanes’ ancient classic brings two Athenians to the country of the birds.

Originally performed in 414 BC, Aristophanes comedy tells the story of two middle-aged men who, fed up with their city and the gods who rule over it, ask the birds to build them a new utopia.

Performed in Greek with English supertitles.

See it if you enjoy alternative theater that is particularly creative. The staging of the birds is great.

Don't see it if you require a sensible and comprehensible narrative

See it if you enjoy Greek language drama interpreted in a contemporary format. Many current references to our world today. The cast is exuberant .

Don't see it if you enjoy linear plays that seem to flow, The Birds seems to explode outwardly in all directions. Contains nudity and use of toy guns.

See it if you can focus on the beauty of the Greek poetry in the midst of unnecessary exhibitionism and chaos. It is a comedy but this is more hostile

95
Unlike anything i have seen before, Ambitious, Entertaining, Riveting

See it if You are ready for a real adventure in theatrical interpretation of a classic full of energy, humor and strange insights.

See it if Energetic, enthusiastic ,pretty over the top company of young actors. Great space, staging. If you liked the play hair, you will like this.

Don't see it if You expect to see the authentic old comedy of aristophanes and if you dont like a lot of nudity.

See it if if you want to see something refreshing, unusual interpretation of classic play and hear (modern) Greek!

Don't see it if you have issue with nudity, also if you don't want to see a 2 hours play w/n intermission.

See it if One of the best plays I’ve ever seen. It’s an absolute must-see for anyone interested what theater could/should be. Also it's a wild party!

Don't see it if you prefer dusty broadway revivals

"The greatest thrills and chills here come from watching the ways in which the show’s avian population resembles people from news footage caught up in the frenzy of a populist movement...Two uninterrupted hours of such fare can eventually wear on the nerves...Nonetheless, 'The Birds' offers sights and sounds you won’t catch anywhere else in this city...The first, full-throated example of the birdsong...It isn’t pretty, exactly, but it’s harsh and hypnotic, primal and ethereal at the same time."
Read more

"Its audacious, celebratory silliness, its sheer irreverent vitality, actually feels more revolutionary, more slyly political and politically effective than 99 percent of the productions you’ve seen that have puffed up their chests and flailed their fists and hammered on seriously about Serious Things...The play is a festival; a heady, loopy, two-hour jamboree that’s kind of like a mental mosh pit...Have turned a nearly 2,500-year-old text into a jubilant full-throttle carnival of the senses."
Read more

“Nikos Karathanos’s wild revival of 'The Birds'...feels as fresh, as topical, and as timely as if it were written today...A phalanx of riotous, bare-breasted birds, costumed in colorful plumage...As Greek choruses go, you couldn’t find a more entertaining one...Karathanos’s stagecraft is a marvelous, creative synthesis of ancient and pop-culture. You sit in St. Ann’s auditorium, looking down at a spectacle whose primal, orgiastic energy transcends two millennia.”
Read more

“Infuses Aristophanes’ ancient texts with an energy that’s both present and timeless: in spite of the language barriers, the message is accessible...What’s disappointing was the ex-machina resolution...Nevertheless...a magnificent work of beauty...The cast’s evocative performances will resonate...An ambitious attack on the text...beautifully crafted piece of theatre...The importance of language becomes almost minimal as we absorb the story through its superb physical movements.”
Read more

"The adaptation has so defanged itself that it seems inert, despite two hours and ten minutes of constant choreography and insistent revelry...Lost in the relatively low gloom, it’s difficult to imagine this cloud-cuckoo-land is a paradise...Substituting movement and noise for argument and salience are certainly any theatermaker’s right, and many audience members seemed delighted to be invited to the party. But I kept peeping around for something to mean anything."
Read more