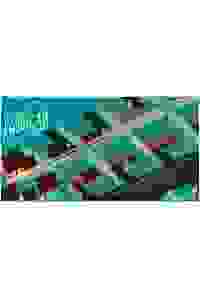 New York Neo-Futurists presents this ever-changing theatrical experiment inspired by what the audience says they want to see onstage. From the company behind the long-running hit 'Too Much Light Makes the Baby Go Blind.'

What makes a piece of theater a success? 'The Great American Drama' is a living theatrical experiment to test the validity of the American Dream: that anyone, regardless of their given circumstance, can achieve prosperity and success through hard work and determination. Through interviews and surveys, you’ll tell the troupe how you like your theater and what would make you buy a ticket, and four Neo-Futurists will strive to deliver everything demanded of them. The cast will even invite the audience to review them each night and change the show accordingly in their pursuit of its success.

See it if You want to see an innovative concept executed well. It's an easy to swallow yet complicated enough experimental piece. Solid performing.

Don't see it if Experimental shows are not your thing. You don't have a curious mind.

See it if You want to take a unique journey w/the actors & audience for a moving & funny experience that's part theatre & social experiment.

See it if you like to participate in your theater, and you want to help a very earnest young playwright with an ambitious theatrical experiment.

Don't see it if you like traditional theater, you're unwilling to accept that when theater is created by the audience, sometimes it's pretty disjointed. Read more

See it if You're up for a fresh & different theatrical evening. Timely questions abound about the nature of time, life, ethics & the American Dream.

Don't see it if You don't want to engage, expect a storyline or traditional scripted play; or dislike having to think. Read more

See it if You like in-your-face theatre that takes its prompts from online feedback.

Don't see it if You want a narrative, you don't like breaking the fourth wall. Read more

See it if you want a show with no plot and jumps all over the place. The acting was fine, but it wasn't a show. Very disappointed.

Don't see it if you don't want to waste 1 1/2 hours thinking to yourself, what am I watching. there are a few scenes that are decent, rest awful. Read more

See it if You want to see experimental threaters: including interactions with the actors and the actors' carrying out feedbacks from the audience.

Don't see it if You want a coherent story. Experimental theater is not your thing.

See it if you're up for experimental theater. This is a clever, original premise that kept us guessing what was coming next; we weren't disappointed!

Don't see it if you want a plot, a 'through line,' or everything spelled out for you. You'll be thinking and talking about this for a while figure it out. Read more

"Based on the results of an online survey asking people to rank what they like best at the theater...So what do people want from a play? Turns out, many pollsters now equate theater with a certain blockbuster musical...The team struggled even more with requests like 'to be transported,' as skits floundered in the twilight zone between comedy and earnestness. If 'The Great American Drama' established one thing, it’s that theater is more than the sum of its parts."
Read more

"The cast is ever game and always personable...But this is a largely shapeless, hit-or-miss evening of comic and/or dramatic bits, and around the two-thirds point my patience ran out. It doesn't help that the piece seems to end several times...If you visit 'The Great American Drama' not expecting anything great or dramatic, you may have a passable time...To my eyes, it's a collection of talent in search of a viable format."
Read more

"There are instances of audience interaction both direct and indirect, and it's at these moments that 'The Great American Drama' feels most alive and the performers closest to connecting. Too much of the rest of the time, there's a crisply pressed artificial quality to the proceedings...The actors are dynamic, resourceful, and apparently tireless, equally adept with the comedy and tragedy that emerge...But they can't quite make it add up to anything."
Read more

“A jagged series of meta-theatrical vignettes with the broad theme of The American Dream…It’s an uneven experience. Essentially it’s a glorified and arch 90-minute, scripted, sketch-comedy show…The staging of the scenes is swift and achieves the suitable tones of humor and occasional seriousness…Some of the sequences ramble and are not so accomplished, but then it’s on to the next one as they are uniformly short…The result is sporadically entertaining and modestly provocative.”
Read more

"Sampson and co-director Greg Taubman wisely take on the challenge by using broad comedy as a starting point and daring to be uncomfortable and even pleasantly boring at times, allowing an actively participating audience to take an occasional breather. When the show goes for maximum discomfort, it’s astonishing...In being daring, however, it is never crass, and in being honest, it is thankfully never saccharine."
Read more

"Each of the performers is friendly, approachable, and personable. They may even have acting chops that would prove satisfactory in a more conventional theatrical framework. But they're not especially strong as improvisers or satirists, nor, as an extensive solo called 'Soulbird'...demonstrates, would you ever see them on 'The Voice.' Nothing here comes close to the kind of wit and panache we associate with even the weakest routines on 'SNL' and other comedy showcases."
Read more

"The cast is talented, inventive and energetic, however the best moment is when Connor is left alone and gets real with the audience. In that moment he exposes his truth, his fears and his hopes...I would like to see this piece developed, but with a broader scope of all ages and opinions. This needs to come from people other than artists, like the people who really buy tickets."
Read more

"On the surface, 'The Great American Drama' looks messy but the inherently thrown-together feel is overcome with passion and heart...Co-directors Sampson and Greg Taubman needed to figure out a way to tighten each moment so any flaw or flub that arose felt deliberate...'The Great American Drama' is unlike anything you’ve seen before. And yet it’s exactly like everything you’ve seen before. It’s an ambitious undertaking that I’m certain will find its footing."
Read more