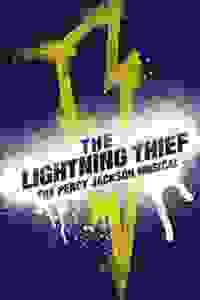 The Lucile Lortel Theatre presents an action-packed musical based on Rick Riordan best-selling young-adult fantasy novel of the same name.

Greek gods are real, and they’re ruining the life of modern-day teen Percy Jackson. In addition to his human woes, he recently found out he's a son of Poseidon. Now Percy has newly discovered powers he can’t control, monsters on his trail, and is tasked with finding Zeus’s lightning bolt to prevent a war between the gods. Normal is a myth when you’re a demigod. Best for ages 7 and up.

See it if you are a fan of the Percy Jackson books, you enjoy loud rock scores, you're willing to follow a jumpy plot with few physical sets,

Don't see it if don't like loud music, don't like songs aimed at a teenage or younger audience or watching attractive young people bounce around

See it if From the young adult Jackson franchise, musicalization is witty, fast paced and intelligent Well sung & acted intro into Greek mythology

See it if you'd like to see a well-written show intended for kids, or Chris McCarrell's performance which is at once both super honest and surprising.

Don't see it if you can't get behind a show that is ultimately meant for kids.

See it if you like a high energy show, with fun upbeat rock music. Great voices. Perfect for ages 8-14.

Don't see it if You are expecting an adult geared production. The props and costumes felt like an innovative college production. But talent was great.

See it if You enjoy a fresh take on Greek Mythology; children/teens in your life who love the books; strong vocals

Don't see it if You are neither of those things

See it if If you wanna sit back and have a fun, entertaining, evening. And go with kids who follow the books. They will have a blast.!!!!

Don't see it if If you want to see a Broadway type musical. That's not what it is.

See it if You want to see a rock musical with a story from the Percy Jackson book. It is great for the 8-teen set, but not just for kids.

Don't see it if You want to see something thought-provoking or moving - this is just a great musical to a known 'coming of age' story.

"Underneath its fantasy trappings is a relatable coming-of-age tale about growing up and finding your place in the world...The seven cast members, though too mature to totally convince as angsty adolescents, are charismatic and energetic, and handle the required quick character changes smoothly...The action rarely flags thanks to Brackett's sharp direction; Rokicki's spirited songs; Tracz's lucid book...For tween audiences, this 'Lightning Thief' is liable to steal their hearts."
Read more

“This low-budget off-Broadway musical thoroughly charms…Providing ample compensation is the amusing dialogue, which proves just as funny for adults as children, and the tuneful, pop-rock score…Both the book and score feature plenty of funny gags…McCarrell makes for an engagingly plucky Percy. The rest of the seven-person ensemble, most of them playing multiple roles, are equally terrific…An excellent if irreverent introduction to Greek mythology.”
Read more

“Director Stephen Brackett keeps this two-hour show moving at warp speed, one song after another advancing the plot and hysterical performances filling the gaps in between…Along with the music, the show's special effects will captivate young and old…‘The Lightning Thief' is a great show to get kids 8 and up engaged with a full-length live theater production. "
Read more

"Delivered with plenty of brio thanks to Tracz's wisecracking, incident-rich script and the energized music and lyrics by Rob Rokicki...Under Stephen Brackett's buoyant staging, aided by Patrick McCollum's caffeinated choreography, Percy's saga makes a smooth transition to the stage...'The Lightning Thief' is not intended for couples seeking a Mom and Dad's night out, but you can take the kids and feel fairly certain that you'll have a good time, too."
Read more

“‘The Lightning Thief: The Percy Jackson Musical’ is a clever entertainment from an exciting novel. Faithful to the source material, it should please both those who have read the book and those who have not. Unlike the similar 'Harry Potter' films, this story is an excellent introduction—or review—of Greek mythology made relevant for our own time. The remarkable special effects are clever in their simple solutions to the story's requirements.”
Read more

"Writer Joe Tracz has excellently adapted Riordan’s novel for the stage by infusing wit and nonstop action into the high-stakes quest. Director Stephen Brackett creates a playful world...McCarrell is a charming young actor with a golden voice and swoon-worthy good looks...Much of Rob Rokicki’s music and lyrics are drowned out amidst the incredibly loud musical accompaniment...Audio errors aside, audience members will delight in this theatrical adaptation of Rick Riordan’s popular novel."
Read more

“More than clever; it’s an exuberant and exciting story that, along the way, teaches ancient history with wit and without sense of pretense. The language is smart without being smart ass and the characters are easily identifiable to both the young and old in the audience. There is something for everyone in ‘The Lightning Thief’…The songs are carefully crafted to express character and plot progression…Although mostly formulaic, the numbers have sufficient wit and are beautifully arranged.”
Read more

“You wanna see a show that is completely innovative and inspiring, where you can share the experience with your children, where after you can go for sushi and discuss how good you feel, how much fun you just had? Yup that’s ‘The Lightning Thief.’ This production is acted and sung as well as any Broadway production…Fun and magic, those are the two words that best describe this production…Every song is a gem.”
Read more