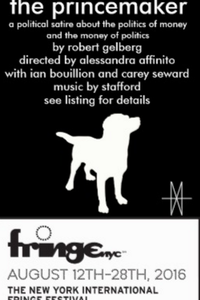 Part of FringeNYC: It's an election year. Leslie Moore, a teenager with an unlimited bank account, finances the Presidential campaign of George Lee, a down-home congressman equally noble and naive. The Princemaker explores the politics of money and the money of politics.

FROM THE ARTIST:
MirrorMaker Productions is proud to premiere the political satire THE PRINCEMAKER as part of the 20th annual New York International Fringe Festival – FringeNYC. Written by Robert Gelberg and directed by Alessandra Affinito, THE PRINCEMAKER focuses on the relationship between Congressman George Lee, a naïve first-term representative from New Jersey, and Leslie Moore, an eighteen-year-old one-percenter who personally finances his ill-advised and premature run for the Presidency. What begins as a political partnership quickly devolves into something much more sinister as George begins to climb in the polls and Leslie begins to seek political power for himself. THE PRINCEMAKER is about the politics of money and the money of politics, and it will be hitting the stage just in time for election season. THE PRINCEMAKER stars Carey Seward as George and Ian Bouillion as Leslie. Carey has recently been seen in The Sackett Group’s production of Picasso at the Lapin Agile as The Visitor and as Carter in Neil LaBute’s Fat Pig at the Michael Chekhov Theater. He trained as an actor at Northwestern University and at the Berkshire Theatre Festival. Ian Bouillion graduated from NYU Tisch School of the Arts in May of this year. He received training from the Royal Academy of Dramatic Art Shakespeare in Performance program where he performed as Posthumus in Cymbeline and the titular role in Henry V. Kelcie Miles will be stage managing the production, and the sound design and music will be created by Brooklyn-based producer Stafford.

Robert Gelberg’s work has most recently been seen as part of the 2015 Tiger Dublin Fringe Festival. Other plays of his include Blanketgate (semifinalist in the Reverie Productions’ 2012 Next Generation Playwriting Competition) and To and From on the Earth, which premiered at the 2012 Minnesota Fringe Festival where one critic labeled his writing “Samuel Beckett meets Kevin Smith.” Beginning in 2017, Gelberg will be the inaugural Playwright-in-Residence at the Montclair Kimberley Academy in New Jersey. Gelberg holds an MFA in Playwriting from The Lir Academy at Trinity College Dublin and a BA from Macalester College where he first met Alessandra Affinito. The two have collaborated on several devised works in the past. Affinito is a director, actor, storyteller, and circus performer making her New York debut with THE PRINCEMAKER. For more information, please visit www.robertgelbergwrites.com and follow the production on social media @PrincemakerNYC.

See it if the basic premise is enough for you.

Don't see it if you prefer (for the main role) more than one-note acting and a logical approach to his Want; even insanity needs to be believable!

See it if you want to see a show/concept that is relevant to the current political atmosphere (and have a tolerance for uncomfortable theaters).

Don't see it if you get overheated easily. No A/C in the building and a lot of bodies packed into a small space. Also if you're not interested in politics.

“Some of the jokes land nicely, especially the pop-culture references, and Bouillion handles his millennial-Mamet dialogue well. But Leslie’s rashness and aggression seem weakly motivated…‘The Princemaker’ has an interesting premise that would benefit from greater psychological depth. For now, at least, it doesn’t get my vote.”
Read more

“The cat-and-mouse dialogue is witty, but what is most interesting is not knowing who is the cat and who is the mouse in each scene...It is unclear why George keeps showing up at Les's home and continues accepting his money despite his unpredictable threats and narcissistic behavior. The plot then takes a downward turn...The performances of both Bouillion and Seward are strong, the direction by Alessandra Affinito is well-executed...For those looking for political drama, it's a good choice.”
Read more

"'The Princemaker' offers characters that come across as surprisingly one-note, a fault accredited to both text and actor...In this 'House of Cards' fan fiction, it feels like the playwright has tried to turn a thesis into a play, armed with theory from Machiavelli to Kantorowicz...Les was either too transparent, too unclear, or too much the archetypal villain for me to want to watch his self-serving plot unfold."
Read more