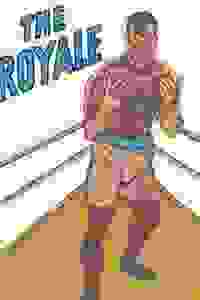 View in admin
The Royale
NYC: Upper W Side
83
Score it Scored!

The Royale NYC Reviews and Tickets

Lincoln Center Theater presents a play loosely based on the life story of Jack Johnson, the first African-American heavyweight champion in history.

Jay "The Sport" Jackson dreams of being the undisputed heavyweight champion of the world. But it’s 1905, and in the segregated world of boxing, his chances are as good as knocked out. When a crooked boxing promoter hatches a plan for “the fight of the century,” The Sport just might land a place in the ring with the reigning white heavyweight champion. Loosely based on real events, Marco Ramirez’s wildly theatrical new play brings to explosive life the sights and sounds of the early 20th century boxing circuit, and the ultimate fight for a place in history.

See it if you like history of boxing, enjoy clever staging, like finding double meanings, want to explore racial issues in different context & reason

Don't see it if you don't like boxing stories, though this isn't one, can't sympathize with the danger and fear black people felt in America, can't imagine

See it if You are interested in the sport of boxing.

Don't see it if You think you're going to witness a play similar to Raging Bull -- this is more thought-provoking.

See it if you like African-American stories or sports stories.

Don't see it if you don't like to use your imagination at a show.

See it if you like great staging. Without a drop of blood or red dye, I felt every punch. I felt the anger. Excellent acting, sound & direction

See it if You like lyrical plays where a boxing match is shown not by punches flying, but by banging a pole on the floor loudly.

Don't see it if You think a show about boxing would actually show people throwing punches and hitting someone. What a concept huh?

See it if You like plays about sports. You like to be nearly on top of the action. You enjoy every play about race and class relations.

Don't see it if You dislike being bombarded by very frequent, obnoxiously loud banging. You dislike plays with a large amount of screaming.

Don't see it if you want something light and fun

See it if You're a boxing fan. Excellent performances. Beautiful set. Based on a fascinating true story.

Don't see it if ...that was done better by "The Great White Hope." Gimmicky - at one point, he fights what looks like a giant tampon.

"Marco Ramirez’s absorbing drama…Staged with a swift, stark lyricism by the impossibly versatile Rachel Chavkin, 'The Royale' boldly takes on and reorients a familiar genre and a familiar tale…The entire cast of this production embody their parts with laser sharpness…Occasionally the script tips into overstatement and overexplanation…But you don’t feel like picking apart the individual elements when they cohere into such an organic whole."
Read more

"Not a single flesh-on-flesh punch lands in Marco Ramirez’s intensely focused boxing drama, yet it’s like you see the blood and teeth flying and hear the crunch of broken ribs. In 'The Royale', the endless sucker punch of a historically racist society is the chief means of violence. Words are another, and they come fast and furious in a percussive script…The big showdown is handled in a fairly ingenious and surprising manner. It connects and it bruises."
Read more

"Featuring elaborately stylized staging that fails to compensate for the thin writing, 'The Royale' doesn't fulfill the promise of its powerful subject…The evening only sporadically comes to dramatic life…To make up for the skimpiness of the material, the dialogue is frequently accompanied by rhythmic hand-clapping, a repetitive device that quickly becomes annoying...The actors' strong efforts aren't enough to make the play feel anything other than pedestrian."
Read more

"Sometimes the most powerful fights are the ones we have in our own minds — a fact vividly depicted in 'The Royale,' a riveting play by Marco Ramirez…A spare and intimate story of internal struggles, propelled by the dynamic, imaginative direction of Rachel Chavkin and performed by a terrific quintet of actors…It’s a struggle made all the more dramatic by a coup de theatre that has the boxer realizing this battle is as personal as it gets."
Read more

"Much of the dialogue among the four men has the rhythm of jazz; the words and actions punctuated by syncopated clapping and stomping…Rachel Chavkin, an inventive and keen director, knows her immersive theater and she also, on the evidence, honors writers. So do the design team...'The Royale' has heart and a conscience, and it’s unquestionably the work of a writer still finding his voice. Like his champion Jay, he’s got style."
Read more

"Chavkin's rendering realizes every bit of tragic theater that the primal sport embodies…Scene after scene of Ramirez's thick dialogue can sit heavily on the brain. When it's roused by Chavkin's clear aesthetic point of view, the narrative comes to life…Just as Ramirez builds his own version of the great Jack Johnson's history, Chavkin interprets the power struggle that occurs when two boxers enter the ring. Each takes liberties with reality, but both artists' renderings couldn't be more truthful."
Read more

"Marco Ramirez's inventively-crafted 'The Royale,' given a tense, rhythmic and evocative mounting by Rachel Chavkin, merits high scores of its own…Davis' attention moves seamlessly as his character goes back and forth from sparring with Fish to sparring with the press...The championship match is represented with unexpected dramatics, as Jay must eventually learn the price of his victories, and of the victories of his people."
Read more