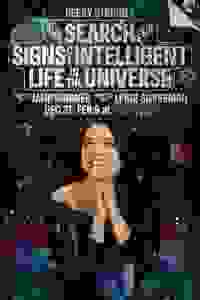 View in admin
The Search for Signs of Intelligent Life in the Universe
NYC: Chelsea
77
Buy tickets from $49 on TodayTix
Score it Scored!

This ever-timely solo show written by Jane Wagner explores the feminist movement through a mischievously clever societal observer named Trudy. As the actress playing her transforms into a series of other archetypal characters, Trudy becomes the play’s guiding conscience for the audience—a comical, quirky, and outlandish conveyor of the nuances of American society. Revisited in a new production for modern times, the comedic and quick-witted play stars Cecily Strong (Saturday Night Live, Schmigadoon!) in her New York theatrical debut and is directed by Tony-nominated Leigh Silverman (The Lifespan of a Fact, Violet).

See it if Cecily is wonderfully likeable in her theater debut; absorbing and touching; great sound effects timed perfectly with Cecily's actions.

Don't see it if you do not enjoy one person shows, especially if you can't help but compare to another artist. Read more

See it if You like Strong - she's lovely and charming. You want to revisit a classic script.

Don't see it if You don't like one-person shows. Despite the updates, this feels dated. Some of the character transitions felt mushy.

See it if ...you want to see a terrific, thought-provoking performance by Cecily Strong

Don't see it if you don't like one-woman shows or are looking for straight comedy. The material was edgy for its time, but less so now.

See it if You are a fan of Cecily Strong, who is terrific, and/or you like multi-character, one person shows.

Don't see it if like me, you saw the original with Lily Tomlin and would find the material somewhat dated.

See it if A one-woman tour de force. Cecily Strong is on stage for 90 minutes straight--going through many roles and voices. And a provocative play.

Don't see it if You don't want a cerebral challenge, including this poser: "What is reality anyway, nothing but a collective hunch."

See it if You like Cecily Strong, or if you are just looking for a good night at the theatre.

Don't see it if You do not like one person shows.

See it if You saw the original and loved it!

Don't see it if You don’t like Cecily Strong, or one man shows!

See it if If you want to see a real great performance by Ceicily Strong. Great sound and lighting.

Don't see it if One woman show an hour in slagged for 5 minutes or so.

"That was never the problem with Jane Wagner’s play; it bristles with barbed insights that have kept me nursing the beautiful bruises for 35 years. And the good news is that in the revival that opened at the Shed on Tuesday night, starring Cecily Strong and directed by Leigh Silverman, many of those barbs are as piercing as ever, breaking the skin of American optimism. Wagner’s existential one-liners amount to a Rosetta Stone of sardonic comedy, an overlooked source of stylings typically attributed to men like Steve Martin, Steven Wright and Will Eno."
Read more

"This mostly comedic multicharacter showcase was created by Jane Wagner in 1985 for her longtime partner, the brilliant Lily Tomlin, who performed it to hosannas on Broadway and beyond. Some of the material now seems worn, though, and on Strong it doesn’t quite fit, at least not yet; it’s baggy in some places, squeezy in others, and it rarely looks very comfortable."
Read more

'For the remount, Tomlin and Wagner and director Leigh Silverman have chosen Saturday Night Live’s versatile, wonderful Cecily Strong to play Tomlin’s part — a casting choice that seems, on paper, to make perfect sense. Instead, it’s a trap. Strong has been lured into decaying material that now works like a tar pit: The more she struggles, the deeper she falls...Built for Tomlin, a performer who commands her audiences, Universe needs Strong to have more confidence, more reserve, more mystery and secret knowledge. Instead, her eyes plead, and her attempts to rally the room seem desperate. She doesn’t get much help from the production either."
Read more

"The show, in which Tomlin cycled through a dozen characters, from a philosophizing bag lady to a status-obsessed socialite, was a feminist landmark and cemented Tomlin as a virtuosic comedic talent. (Her performance was captured in a 1991 film version.) Now another master impressionist is taking it on: Cecily Strong, of “Saturday Night Live” and “Schmigadoon!” Strong is a worthy successor to Tomlin, infusing even obnoxious characters with a warm, beguiling core."
Read more

'She is totally up for the challenge: After a decade on SNL, Strong has honed the skills that make her such an appealing and gutsy comedian. Her forte is the absurdly assured lady who refuses to let anything get in the way of making her unhinged point. At the same time, in that recent fusillade of bonbons, Schmigadoon!, Strong got to show her sensitive, romantic side as a modern woman trapped in a world of musical-theater clichés. Brashness and vulnerability are key ingredients in Strong’s very winning and limber performance."
Read more

"All the more disappointing then that The Search…, executive produced by Tomlin and Wagner and opening tonight at the spiffy Hudson Yards venue The Shed, often feels so flat, a casualty of material that once seemed utterly fresh and of-the-moment but now, despite a few feeble attempts at updating, comes off as something of a relic. Characters that occupied prime turf in the ’80s zeitgeist – Second Wave feminists newly daunted by the have-it-all quest, a CBGB-era Patti Smith-esque punk poet, pre-hook-up-app Times Square sex workers and even an aerobics fanatic – a timestamped signifier if ever there was one – have long since lost their edges."
Read more

"While one can appreciate Strong’s enthusiasm and energy, she does not possess the heightened individuality, whimsicality, and physicality (as demonstrated by Tomlin in the film version, which can be found on YouTube) in order to pull off this very challenging and demanding piece, which requires switching back and forth between a dozen characters. Due to a lack of precision, it is occasionally difficult to follow the show or figure out who she is playing."
Read more

"If anyone could make it work, it's Cecily Strong, a remarkable comic talent with a keen sense of theatricality. She gamely introduces us to Wagner's characters, none of which feel like cheap imitations of Tomlin...Strong portrays them all with aplomb, bringing her idiosyncratic charm to each role. It's still not quite enough to overcome a very strange and often uneven play."
Read more

"Strong—in a winning New York stage debut—and director Leigh Silverman (Grand Horizons) wisely resist the temptation to make Trudy a caricature; she’s actually pretty relatable for a woman whose coat is lined with Post-its...Equal pay, the ERA—all the things Lyn and her friends marched and rallied for…still works in progress. Did Wagner have any idea that all these years later The Search would be so relevant?"
Read more

Her nine years on SNL would seem excellent preparation for Search which requires her to portray ten different characters alternately. However, although Strong has tremendous stage presence, she has not yet grown into all of the roles or given all of the characters (nine women and one man) distinct, separate voices. While still a tour de force for one performer, the play seems dated after 37 years with one scene using a coin pay phone and several references to the Equal Right Amendment (ERA), neither of which are in common parlance anymore. On some level, a good deal of the play takes place in the past (Betty Friedan, LSD, Rupert Murdoch, “I mean the Women’s Movement isn’t that old,” etc.) but as no years or dates are mentioned, it feels like it is taking place now which seems like a mistake. Without the intermission, the show presents too many stories to take in all at one sitting.
Read more

"The strength of all of these characters is brought to life by the aptly named Cecily Strong. Strong, an SNL regular and star of Schmigadoon, is making her stage debut and knocking it out of the proverbial ballpark. Her strength and presence are both powerful and commanding. She is embodying each character with such specificity that we know them as separate entities, life forms. Her generous, often hilarious, comedic presence holds us in the palm of her hands for the tight ninety-minute production of storytelling and poetic scientific observations. In Strong’s performance and Wagner’s apt writing the audience is right there with the characters … well sort of… the overly produced production heavy with props, costume changes, music, and lighting often took me away instead of bringing me in and weakens story and performance."
Read more

"Strong’s talent as a performer and comedian lies in the subtle edge underneath a warm, girl-next-door normalcy, and director Leigh Silverman has wisely leaned in to this. Strong’s Trudy isn’t spikily crazy, and her characters in general are friendlier, less weird, and often more relatable than they seem on the page or as played by Tomlin. The downside is that the characters tend to blend together a bit (also partly due to the excision of a lot of detail from the script), which loses some of the sense of surprise as the connections among them start to become apparent."
Read more

the production didn’t strike me as a great showcase for Strong’s talents. She’s toned down the wackiness of her SNL skits, as if she’s trying hard, in her New York stage debut, to measure up to the material and to Tomlin’s legacy, rather than making the characters her own..Still, Strong is a competent enough actress and comedienne to make the case for the continued effectiveness of Wagner’s play,
Read more

"Not to mention, The Search for Signs is a love letter to live theatre, too, that couldn't have come at a better time. When else would we believe that an umbrella hat-wearing, homeless, "crazy" woman is a time-traveling mouthpiece for the human condition? When we hear that woman talk about how the aliens behaved when she took them to the theatre. "They said it wasn't the play that gave them goosebumps, it was the audience," she says. "To see a group of strangers sitting in the dark, laughing and crying about the same thing, just knocked them out." Suddenly, nothing about the play, about aliens, about human connection seems crazy at all. The inimitable power of theatre to reinforce our shared life is something that, by simply sitting in a theatre to watch The Search for Signs, we discover to be true."
Read more