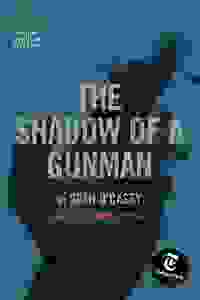 View in admin
The Shadow of a Gunman
NYC: Chelsea
80
Score it Scored!

The Shadow of a Gunman NYC Reviews and Tickets

In O’Casey’s 1923 drama, a young poet gets pulled into the chaos of Irish War of Independence by a rumor that he is an IRA assassin.

It’s 1921, and the Irish War of Independence rages on the streets of Dublin as Irish revolutionaries clash with British auxiliary forces. Aspiring poet Donal Davoren tries to avoid the conflict, but when Donal learns of a rumor that he is a gunman on the run, he cannot resist the curiosity it stirs in beautiful young Minnie Powers…and he cannot escape the attention of his other neighbors. As the rumor grows, the war outside moves closer to home with tragic consequences.

"The Shadow of a Gunman" is being presented in repertory along with the other two plays of Sean O’Casey’s "Dublin Trilogy" ("Juno and the Paycock" and "The Plough and the Stars") as Irish Rep’s "O’Casey Cycle."

See it if Well acted piece of classic theater. Heavy accents (of course) and a relatively simple story. But well told. I enjoyed it.

Don't see it if You don't like historical plays about the IRA.

See it if Funniest of the 3 O'Casey plays. The poet is hilarious. A satire on how people react when faced with danger. Colorful tenement characters.

Don't see it if You are uninterested in a historical play set in 1920's Ireland. Farcical elements of people caught in conflict.

See it if you enjoy classic dramas with historical settings. The auditorium has been converted to create an environment for the play. Great direction

See it if u want to see a stunningly staged, taut revival of O'Casey's masterful thriller; u appreciate (or want to discover) Irish Rep's mission.

Don't see it if ur not interested in Irish culture or history; u are looking for strictly light fare; your idea of Irish theatre is the St Pat's Day Parade

See it if Early O'Casey is as much irish blarney as fraught political melodrama Rich characterizations; O"Reilly's taut direction keeps drama on track

See it if you enjoy Irish plays & O'Casey, like linear plots filled with well-developed characters & action, interested in Irish war of independence

Don't see it if you have trouble understanding Irish dialect, bothered by suspense and impending gun fire & explosions, not into Irish & IRA history

See it if Spectacular Scenic Design and Costumes. So pleasing to again see the same show from 20 years ago and with some of the same cast . See Also

Don't see it if Practice some speech with folks with Irish inflections before seeing the show. A/C much too effective for Feb. eves. See Also Read more

See it if you're interested in period dramas set during times of conflict. There are many well-drawn characters performed well by a talented cast.

Don't see it if you're looking for something uplifting or contemporary.

“O’Reilly’s production doesn’t hit any of the themes too hard. If he does locate the brutality in much of the comedy, he treats a grim play lightly. If you’re worried that you may not find gun violence especially funny, just lean back and luxuriate in the language...When the play takes its uncorrectable skid into tragedy, there’s enough dramatic force to make you feel for the characters, even the ones you laughed at. At nearly 100 years old, O’Casey’s play still packs heat.”
Read more

“The first half of ‘The Shadow of a Gunman’ is a tenement comedy that is almost sleepy...The characters are poor, yet rich in the time to talk...As a play, ‘The Shadow of a Gunman’ is a bit schematic. That’s why it’s the least frequently produced of O'Casey's Dublin Cycle; you can see the plot's melodramatic turnings a mile down the road...Luckily, director Ciarán O'Reilly presides over an embarrassment of riches from lead to bit player...Irish Rep treats this relatively minor work like royalty.”
Read more

"Mr. O’Reilly has once again turned the company’s 148-seat mainstage auditorium into an immersive space that places you squarely in the middle of the shabby world of O’Casey’s characters. The cast is miraculously right, though none of the 10 actors appear to be 'performing'...O’Casey never lets us forget the bloody toll exacted by those prepared to pursue it at all costs. That is the 'message' of 'The Shadow of a Gunman,' and it couldn’t be more relevant here and now."
Read more

“Thrilling new production...Superbly performed...As excellent a production of the play as you're ever likely to see...Characters come off as Shakespearean clichés, but the actors...get us through...That quibble aside, ‘The Shadow of a Gunman’ showcases O'Casey's unquestionable talent for blending the comic with the tragic. O'Reilly makes the transition from one to the other as natural as day to dusk...The realism of the production is one of its strongest suits.”
Read more

"They're not an especially appealing lot, at least in Ciarán O'Reilly's overhearty production; they keep banging through the doorway, bursting with energy and oratory, seemingly ready to take part in a farce that the playwright hasn't written...If the first act comes off as a rather too-zesty serving of local color, the second act is an immersion in a terror that seems all too familiar today. O'Reilly's staging acquires a muscularity it lacked."
Read more

"''The Shadow of a Gunman,' is an uneven misfire...Directed with a lack of cohesive tone by O'Reilly, the biggest problem with this revival is the actors aren't working in the same style...Both James Russell and Meg Hennessy are on the right wavelength with regards to O'Casey's taught style...Their tenement neighbors, on the other hand, are too over-the-top and overwrought in their characterizations. The contrast is jarring and the play's overall impact is severely lessened."
Read more

“For the most part, this fine, enduring play receives a winning and vital production by O’Reilly...The pacing seems to lag in a few places...Which suggests that not all of the actors are entirely secure in their characterizations...O’Reilly’s staging of the drama’s climax and conclusion, which are complex in action and emotion, is handled and performed extremely well...The general excellence of ‘Gunman’ makes one look forward to seeing the next two shows in its O’Casey Cycle.”
Read more

“This bracing and ultimately haunting production reminds us—under the witty, vigorous direction of O’Reilly—the playwright had a keen eye for human frailties and foibles...O’Reilly has filled his cast with fine players who drive home ‘Gunman‘s’ harrowing elements while fulfilling its rich comic potential...Given the troubled, polarized state of our own nation...’The Shadow of a Gunman’ provides a powerful reminder of all we still have to be grateful for."
Read more