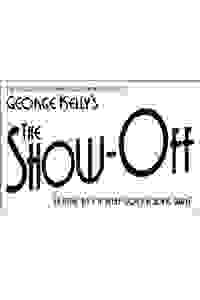 The Show-Off NYC Reviews and Tickets

The Peccadillo Theater Company revives George Kelly's 1924 comedy about an egotistical braggart and his farcical attempts to retain some dignity amidst his own self-aggrandizing hyperbole. Starring Annette O'Toole.

Notable for its blending of comedy and drama, 'The Show-Off' revolves around a working-class Irish family in North Philadelphia in the mid '20s. Mr. and Mrs. Fisher and their three adult children are thrown into a state of turmoil when Amy, their middle child, brings home a preposterous suitor named Aubrey Piper. A compulsive liar with delusions of grandeur, Aubrey meets his match in Mrs. Fisher (Annette O'Toole), the crusty, no-nonsense matriarch of the family. A battle of wits ensues and the outcome is a vindication (of sorts!) of the American con man.

See it if You want to see a pleasant but pointless play. To me it seems to be a well done production of a not very good play.

Don't see it if You’re looking for something with a lot of depth or meaning. This is well done but I just don’t get what it was done for.

"A disjointed production...Its chief asset is Annette O’Toole...The dramatic sparks between Ms. O’Toole and Mr. Schneider suggest what the production might have been if all of the principals were operating on the same aesthetic plane. Instead, there is an awkward jumble of acting styles...In the battle between Mrs. Fisher and this vulgar interloper, the deck is heavily stacked, and that makes 'The Show-Off' no fun at all."
Read more

"In this mostly miscast production, indifferently staged by the troupe’s artistic director, Wackerman, nothing shines. To be fair, however, it’s not just the staging that seems lacking; 'The Show-Off' doesn’t have much underneath its dust...Though meant to amuse, the antics of this lying narcissist don’t seem very funny, and sudsy subplots inspire the actors to play Act II like a drama—with deadly results...They say that comedy is tragedy plus time. Comedy plus time, in this case, is tragic."
Read more

"'The Show-Off' is ostensibly a comedy, but the truth is that it's not very funny, at least not as directed by Dan Wackerman...One wonders if we would actually laugh at this jazz-age clown as portrayed by a more natural comedian; here, we just grimace to the sound of crickets...American audiences have delighted in the redemption of this shyster for 92 years (and six Broadway revivals), but 2017 might just be the year that 'The Show-Off' ceases to amuse."
Read more

"Perhaps Kelly's great success has grown too old for contemporary audiences to be easily familiar with its comedic targets...The rather thin plot is stretched to the limit, leading to a possible redemption for the rascal. The period flavor presented by director Wackerman's talented ensemble helps coax the material along, but 'The Show-Off' comes off more as a historic curiosity than a worthy obscurity."
Read more

"The current Peccadillo revival leaves one wondering why it should be considered a comedy at all...Dan Wackerman's production lays bare the creaks in Kelly's script. It begins with a flurry of exposition that leaves one wondering if it will ever get going. A subplot, about the youngest member of the Fisher clan and his industrial invention, is the baldest of plot devices...Indeed, the designers' contributions are far more compelling than the text that they have worked so assiduously to support."
Read more

"An American classic of long standing, George Kelly's 'The Show-Off' may have dated. However, as has often been seen with legendary Moliere comedies, the right style will make all the difference. Dan Wackerman's handling of 'The Show-Off' has deflated the high-jinks and satire that is very much in evidence in this long admired character study of a typically American type. It is left to the right director to bring out the brilliance in this 1920's comedy in some future revival."
Read more

"George Kelly's 1924 consistently amusing dramatic comedy shows how un-musty a 93-year-old play can be thanks to the adroitly addressed direction of Dan Wackerman and his responsive ensemble...It remains for the many splendid performers and their delivery of Kelly's crisp dialogue to glide over the play's few exposed seams...This is no resurrected trifle, but a well-written and worthy revival of a comedy classic."
Read more

"There’s a reason it’s so little revived, it really isn’t a great play. And what may have been funny and topical in 1924, is nigh unto incomprehensible in 2017...Although I will admit that the second act is better than the first, the ending is jaw-droppingly ridiculous, and just plain unbelievable. It’s a shame really that so much good work has been put into the production of a play that just can’t reward the effort of either the actors and crew or the audience."
Read more

"It’s a frothy, silly period piece with a lot of heart and some interesting comments regarding the institution of marriage...The direction here, by the discerning Wackerman, is right on point...This is a well-heeled company, an embarrassment of riches...Has a production team that knows how to show off their inimitable expertise, and it’s really delightful. So, tell a fib or two, a harmless little white lie, steal a little time away from the rest of your busy schedules and catch 'The Show-Off.'"
Read more

"There are laughs in 'The Show-Off' but most are chuckles and only a few land big, although Kelly's comedy can be praised for its spontaneous rather than deliberate quality. On the other hand…there are long stretches…whose naturalistic tone is surprisingly serious (and dull)…This is definitely not a show-off revival… but it should prove satisfying enough for theatregoers curious about the most popular play by one of America's foremost, if largely forgotten, dramatists of the 1920s and 1930s."
Read more

"Using Annette O’Toole as the mother is a waste of her talents and feels like miscasting...I wish this story had been more explored. The success of the night is Tirosh Schneider who plays the youngest Fisher child, Joe. It is his storyline that gives us that inevitable happy ending...This show feels dated under Dan Wackerman’s direction but is pleasing to look at thanks to Harry Feiner’s scenic and lighting design. Sometimes shows should be left in the closet as time has passed them by."
Read more

"Peccadillo Theater Company is doing its gallant bit to revive interest in playwright Kelly with its super production...In a series of clever plot fiddling, Kelly keeps his cards close to his playwright’s chest. As possibly his best achievement he keeps Aubrey one of those figures you love to hate...Director Wackerman is a dab hand at these wonderful American chestnuts. The cast measures up to everything he’s obviously asked of them."
Read more

"The first question is why revive this piece...Aubrey ranges from irritating to infuriating. Amy is stupid. Clara switches her judgment and behavior without sufficient underpinning. Frank is a cipher...The second is a matter of two acting styles at war...Wackerman, who moves his players around with great skill and captivating small business, has given us far better in terms of performance...In order for a play like this to work at all, casting must be believable and style consistent."
Read more

"The story’s tricky mix of comical and serious doings makes the play a challenging one to produce, and the Peccadillo Theater Company’s new revival does not effectively fuse its contrasts. There needs to be a subtle stylization to the acting and the visuals, but such an effect eludes Wackerman, the company’s artistic director, whose flat-footed staging yields a mostly dull occasion. Moreover, the fuzzy acoustics of the Theatre at St. Clement’s are no friend to Kelly’s should-be-snappy dialogue."
Read more

"How a playwright and director balance our distaste for a blowhard throughout three acts requires skill. Kelly’s writing shows skill. Wackerman reveals a sensitivity to this problem. However, astute acting handles the potential issues of our annoyance...O'Toole propels the production. Thankfully, her feisty performance stirs the pot of laughter and moves the character dynamic toward conclusion."
Read more

"Kelly’s title character, Aubrey Piper, is a great creation, an annoying rascal and a liar, and one waits impatiently for him to get his comeuppance...The pudgy Gould inflicts every irritation that his obnoxious character can put upon the others as he swans around the gorgeously detailed living room and parlor...In the final moments, Kelly springs a last twist that proves darkly ironic yet feels just right."
Read more

"May not be as funny in 2017 as it seemed in 1924 and at times may even feel a bit tiresome...O'Toole nails most of her snappy quips...Orelove moves nicely from the love-struck fiancée to a young wife...Gould comes short of being an illegal huckster but is convincing as Aubrey...Unfortunately, the building of the story develops slowly and the direction by Wackerman fails to keep a snappy pace. The sudden death in the middle brings in a tragic element that is handled with an edge of clumsiness."
Read more

"The Peccadillo's production of Kelly's odd but effective comedy is more than solid. It is wry and real, and it manages to show the play's relevance to today while never betraying its place in the past...Kelly's excellent writing is fabulously supported by Wackerman's direction and the wonderful acting of, in particular, O'Toole as Amy's humorously frustrated mother Mrs. Fisher and Hudson as Amy's sister Clara, who cannot figure out why her husband doesn't quite love her."
Read more

“The play is about a working-class Irish family living in North Philadelphia. Josie and Neil Fisher's daughter Amy is hopelessly in love with Aubrey Piper, an obnoxious, toupee-wearing blowhard. Unfortunately, Annette O'Toole as Mrs. Fisher, and Ian Gould as Aubrey Piper, fail to deliver the performances required to engage and interest the audience. That said, the set is beautiful and the costumes are period appropriate. There are also some talented and charismatic actors in the cast.”
Read more

"Feels like a discovery...Kelly’s 1924 comedy marries a drawing-room aesthetic to the politics of the day...Wackerman further downplays the inherent comedy in Aubrey’s outlandish posturing, which serves to foreground the play’s surprisingly radical underpinnings...Gould certainly finds the funny in Aubrey’s most idiosyncratic turns of phrase...A fine staging."
Read more

"This play in which the action takes place nearly a century ago might seem to offer an escape from modern travails. But the play’s themes are (uncomfortably) timeless...Gould is eerily good as the self-deluded Aubrey Piper — a character we initially love to hate. Gould is appropriately pompous and boastful, and dominates most conversations. Tirosh Schneider as Joe also stands out as the bright-eyed and good-hearted teenage whiz kid."
Read more