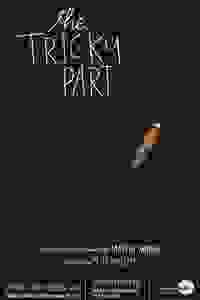 Martin Moran’s reprises his OBIE Award-winning solo show, a comic and surprising journey through the complexities of Catholicism, desire, and human trespass.

Between the age of 12 and 15, Martin Moran had a sexual relationship with Bob Doyle, a Vietnam veteran who was a counselor at a Catholic boys’ camp. Thirty years later, he meets his abuser again. "The Tricky Part" has been produced and performed all over the world—throughout the United States, Canada, South Africa, and India.

See it if you have 90 mins to hear an intelligent, funny man sharing his story of childhood sexual abuse. 1st encounter is read fr MM's book. No set.

Don't see it if you want a full condemnation of adult predators. MM doesn't hate his. I found this forgiveness disturbing...a betrayal of vulnerable youth.

See it if You want to be mesmerized by one of the best storytellers I’ve seen in a long time. He weaves a deeply personal story of anger/forgiveness.

Don't see it if You don’t like one person shows, though this is one of the best. Even though it’s a very serious subject he uses a good deal of humor.

See it if Moran is a great storyteller. It is well written and acted with great emotion.

Don't see it if A serious subject like this bothers you. If you want Something lighter.

See it if I felt an intense connection with the author through his tale of suffering, loss of innocence, and ultimately, compassion.

Don't see it if You aren't up for an explicit story of sexual abuse that goes to surprising, ambiguous places. Life is rarely black & white.

See it if you'd like to hear an acutely observed, deeply affecting tale of boyhood sexual abuse, leavened by witty commentary about Catholic education

Don't see it if you cannot bear to hear the details of adolescent sexual abuse or you do not respond to solo shows that are 1st person narratives. Read more

See it if Sensitive gay man searches for truth, validation and ultimately, forgiveness. Told with frankness and humour. Moving and insightful.

See it if You love solo shows and are okay with heavy content about child-adult sexual experiences. This is comparable to HBO’s “The Tale”.

Don't see it if You feel that, though important, many molestation stories are similar & you don’t want to feel uncomfortable amidst graphic content.

"Beautiful and harrowing,,,This account of a Roman Catholic boyhood interrupted retains a luminous, novelistic complexity that sets it apart from similar tales of stolen childhoods. It is, in its way, a mystery story, in the richest sense...Moran makes sure we acknowledge and respect what is unspoken and perhaps undefinable...14 years after 'The Tricky Part' was first staged, the dialogue between the two continues with full eloquent and ambivalent force. It is unlikely to end — ever."
Read more

"The passage of time brings additional wisdom, and this revival finds Moran fearlessly interrogating his own work in an effort to dig even deeper. It's a frank, shocking, and beautifully sincere look at the psyche of a child on the cusp of adulthood, the older man who took advantage, and the difficulty of healing deep wounds...'The Tricky Part' is more than a play...It is as deep and connected an experience as we can have in the theater."
Read more

“’The Tricky Part’ is a stealthy piece of construction; it sneaks up on you when you're not looking and leaves you emotionally poleaxed...Under Barrish's infinitely tactful direction, Moran handles this story entirely without sentimentality or bathos; ‘The Tricky Part' is so honestly written that each word, however painful, feels like a benediction. In the end, it is Moran's candor that saves him, opening the door to the understanding that forgiveness begins with himself.”
Read more

"Moran's deeply affecting account has lost none of its potency in the intervening years, and 'The Tricky Part' is a timely reminder of the healing power in sharing and receiving traumatic histories...Moran is a gifted raconteur with a talent for making the audience lean in closer even as they want to pull back when the memories become so excruciatingly personal and disturbing. Indeed, the strength of the play stems from its simplicity."
Read more

“Overbearing nuns, eccentric priests and confusing religious tenets are detailed with stand-up comedy gusto...What distinguishes ‘The Tricky Part’ is Moran’s fierce writing that clinically describes what happened with poetic realism...Moran is a captivating storyteller who effortlessly switches from light-hearted to seriousness with vivid facility...It’s all spellbinding due to Moran’s polished performance, his rich writing and the accomplished presentation.”
Read more

"Feels not just timely but also refreshing, a necessary reminder of the humanity that can be found in even the most traumatic of events...'The Tricky Part' is not the 'child sex abuse show' you might think. It’s a story of reckoning, yes, but also one of grace and kindness, one that suggests that there might be value in even the worst experiences...It’s an essential piece of theatre, and we are lucky that Moran and the Barrow Group have brought it back—see it if you can."
Read more

"What Moran has achieved with his play, is that it is indeed a play, and not a monologue or something that could as easily be read, and not necessarily performed. Smartly directed by Seth Barrish, what they bring to the piece with humility and humanity is undeniable...There wasn’t a moment in the play where Moran did not have my full and total attention."
Read more

"Seth Barrish, who directed the original, does the same for this production, showing the delicacy of a conductor interpreting a complex symphony transcribed for a single instrument. In the course of 90 minutes, Moran’s performance varies widely in tempi and dynamics, yet the momentum never lags...Moran's beautifully written script steers clear of self-pity, pop psychology, and agitprop, and dramatizes with exquisite simplicity a complex individual’s response to adversity."
Read more