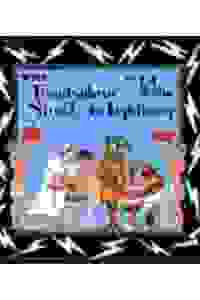 The Troubadour Struck By Lightning (FringeNYC) NYC Reviews and Tickets

FROM THE ARTIST:
After years of development and lots of laughs, Temerity Theatre Co. brings the new play "The Troubadour Struck By Lightning" by Ed Malin to the 20th Annual New York International Fringe Festival August 16-27, 2016. The production is directed by Janet Bentley and stars Lance Olds, Tim Weinert, Michael Hagins, Francesco Andolfi, Mary Sheridan, Hennessy, Mary Barnard and Victoria Scott. Music is by the Roly Polys. Choreography is by Tatyana Kot. Costume Design is by Janet Mervin. Lightning Design is by Gilbert "Lucky" Pearto". Our dramaturge is Theodore Dage. The show photographer is Bryan Cash. This is an AEA approved showcase.

A racy look at the music, poetry, heretics and sexual deviance of the South of France circa 1325. A play with music, which asks questions about the origins of today's culture of love. In the Thirteenth and Fourteenth Centuries, one million Christians were killed in Occitania by Catholic armies during the "Albigensian Crusade". Join Manfred son of Manfredo, a singer who finds out the hard way why these things happened and how religious tolerance and freedom of love can survive.

See it if you want an enjoyable community theatre vibe, talented players & a playful, entertaing mode

See it if You like period pieces, a small venue, which is actually set up well (including the bano), Monty Python". "Spamalot", "Something Rotten"

See it if are open to a long and involved history of some ancient lands and people. Too much geography and not enough drama.

Don't see it if you want to look at your watch more than the stage.

See it if you want a new take on medieval European Muslim history. Great story telling.

Don't see it if this is of no interest to you.

See it if You really like writing that makes you think. Also if you want to see a show about 13th century homosexuality.

Don't see it if You don't like the theme, need a straight forward plot, if you're a fan of well directed shows with more then mixed talented cast.

See it if You want to see an expertly staged show with a strong ensemble. You like history with a slice of Monty Python

See it if you like creative music and dance

Don't see it if you want to understand everything

Don't see it if You just want fluff.

"The actors are fearless, and make great use of verbal and physical comedy in every scene. The dialogue, however, can be quite dense, so I fear that many of the nuances and specific details are lost on the audience. It seems to me that Malin is incredibly passionate about this rich history. However, the result is too much information crammed into a one-hour performance, and I am unclear what overall message he wants the audience to leave with."
Read more

"The modern references Malin sprinkled into his text were quite wonderful…The biggest obstacle...was the space...This is a play that was intimate and the vastness of the 14th Street Y was detrimental...The ensemble did their best to combat the woes of the stage by becoming a tight ensemble. Though there were some strong individual performances, 'The Troubadour Struck By Lightning' was truly a team effort. There is incredible richness in Ed Malin's text."
Read more