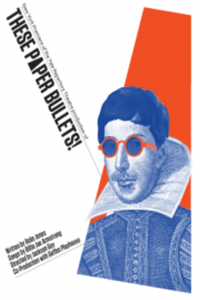 The Atlantic presents a musical, modish ripoff of William Shakespeare’s 'Much Ado About Nothing' about a rock group from Liverpool that returns to swinging ’60s London after conquering the U.S.

'These Paper Bullets' follows Ben, Claude, Balth, and Pedro. The four make up the wildly popular band Quartos. Worshipped by fans, feared by Scotland Yard, and hounded by their former drummer, who is determined to destroy them, they arrive in London. In only seven nights, the fab four from Liverpool will travel to London, attempt to cut an album, and woo their way to true love. As usual, however, true love may end up making fools of them all.

See it if you like to have fun & listen to fun beatles-like music.Loosely based on Much Ado About Nothing. Some lines taken verbatim from the original

Don't see it if you are a Shakespeare purist.

See it if You like funny shows with great music or like the 60s (music, fashion, celebrity) It's a lot of fun! The women are particularly hysterical!

See it if You love the British invasion and don't mind a quirky, meandering play-that-wants-to-be-a-musical.

Don't see it if You are looking for a smartly-written musical.

See it if you like Shakespeare or The Beatles (it's sort of a mashup of both) and fantastic staging.

Don't see it if you don't like Shakespeare or The Beatles.

See it if think a show that evokes the Beatles and Shakespeare is a must see. Acting is good. Songs are better.

Don't see it if a crisp well written script is high on your list of wants. Billy Joe Armstrong would have been better suited to do a Beatlesesque album.

See it if you don't mind your Shakespeare being mixed up a bit!

See it if I saw a preview, perhaps it improved. But I found it flat and draggy.

Don't see it if You loved American Idiot and expect that level of music and intensity.

"A lively if labored update of “Much Ado'...The jangling rock tunes by Billie Joe Armstrong provide energizing interludes...Jolly though it remains throughout, 'These Paper Bullets!' becomes exhausting as Mr. Jones piles on the complications...What has most crucially gone missing, unfortunately, is any depth of feeling in the main characters, which becomes a liability as the show stretches to two and a half hours."
Read more

"Jones takes liberties with story; there are also wacky diversions into Benny Hill silliness...Snappily directed, with tremendous costumes, 'These Paper Bullets!' fizzes with the comedy of sexual liberation...Parker’s bravura physical comedy made me laugh harder than anything I’ve seen in the theater all year....The show is well acted all around, but the women are particularly fab."
Read more

"Whether you will like 'These Paper Bullets!' will probably depend on how much you like 'Much Ado About Nothing.' Depend inversely, I mean. If that most deeply human of Shakespeare’s comedies means little to you, its adaptation as a play with music may amuse. Otherwise you are likely to find it, as I did, leaden, juvenile, chaotic, and nearly intolerable, except when it sings. Then, it’s nice."
Read more

"Unfortunately, 'These Paper Bullets!' is not a musical, but rather a laborious farce, uneasily combining satirical riffs on The Bard with tired spoofing of The Fab Four. Since both ideas have been done to death over the years, there's little that's fresh here...The chief pleasures of the show stem from the handful of Armstrong's songs, which ape the Beatles' music. The problem is that there aren't nearly enough of them, and there's too much of everything else. "
Read more

"Jones has a gift for reconstituting Shakespearean dialogue with just enough sampling of the real thing to keep us feeling both amused and smart. Even more impressive, each of Armstrong’s songs mimics an identifiable number from the Lennon/McCartney canon while ingeniously turning the songs inside out...The whole may not be more than the sum of its parts, but the parts positively sparkle."
Read more

"Too bad 'These Paper Bullets!' — a riff on 'Much Ado About Nothing' by Rolin Jones and Billie Joe Armstrong — misses the mark when it comes to being fully engaging. This play with music comes off labored and overlong, despite a fine ensemble and direction by Jackson Gay, whose staging packs energy and clever live video."
Read more

"The main problem lies in Rolin Jones’ labored, overlong script, which uneasily combines lines from the original text with colloquial language. It would have been better to either perform 'Much Ado' as is or use all-new dialogue. Jackson Gay’s direction is not so great. The cast tries too hard to win laughs with broad, frantic antics, and visually the production is ugly and cluttered."
Read more

"The farcical elements are high points but the play is overstuffed. At two and a half hours, the novelty wears off and it becomes exhausting trying to keep up with the myriad references...Director Jackson Gay lets it all hang out for better and worse, though there clearly is method to the madness. If only there wasn’t so much of it."
Read more