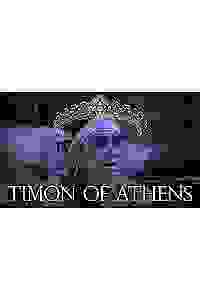 In Simon Godwin's staging of Shakespeare's tragedy, the role of is Timon re-gendered as female and played by Olivier Award winner Kathryn Hunter.

Kathryn Hunter, the internationally recognized Olivier Award winner, plays the role of Timon re-gendered as female. Celebrated as “astonishing,” her performance was first seen in a 2018 production at the Royal Shakespeare Company, directed by Simon Godwin. Ms. Hunter, memorable as Puck in TFANA’s A Midsummer Night’s Dream directed by Julie Taymor, has also been acclaimed as King Lear, Juliet, Cleopatra, and Richard III.

Timon of Athens is a play for our times. Hilarious, satiric, and deeply moving, the play explores ingratitude, wealth, and what determines self-worth. Timon lives in a world of opulence, throwing wild parties and lavishing gifts on her friends. But, when Timon suddenly loses her fortune, almost everyone abandons her. Timon retreats to a forest, exchanging luxurious gowns for sackcloth, in a powerful journey of self-discovery.

Timon of Athens is a co-production of Theatre for a New Audience and Shakespeare Theatre Company in association with the Royal Shakespeare Company.

See it if If you like untraditional Shakespeare. Great set and for the most part very good acting.

Don't see it if Hunter tended to mumble and not easily heard. Lines went on as did speeches. A so - so production.

Don't see it if Don’t like Shakespeare & trouble with his language, don’t like His “problem plays,” curious about play he co-wrote with Middleton, static

See it if interested in seeing a lesser known & performed work by Shakespeare; Kathryn Hunter is terrific and enjoys playing with the audience

Don't see it if poor acoustics, cannot hear actors when they are not directly facing you; missed much of Hunter's words making it difficult to stay involved

See it if you’ve never seen Timon of Athens and need to check it off your list. This is a professional production with several great actors.

Don't see it if Verbally, this is full of vitriol & despair…but the show still felt emotionally distant, staged. It only occasionally came to life for me. Read more

See it if to see a rarely performed semi-Shakespeare play (not all of it written by him); satire on wealth and buying friendships; Hunter wonderful

Don't see it if slow first act (despite the glitz and humor, which gets tiring), 2nd act darker; not a great Shakespeare play; some dialogue hard to hear

See it if You enjoy Kathryn Hunter

Don't see it if You prefer traditional Shakespeare

See it if you'd like to see this rarely produced text and a terrific Kathryn Hunter performance.

Don't see it if you typically find Shakespeare difficult.

"Shakespeare’s ‘Timon’ Gets an Occupy Athens Makeover: Kathryn Hunter stars as the fabulously rich Greek who understands the corrupting value of money only after she loses it."
Read more

"The world of 'Timon of Athens' is one of false glitter -- illusory wealth, faithless friends, and social status that evaporates overnight -- but, at TFANA, the play has a solid-gold centerpiece named Kathryn Hunter."
Read more

3/5 Stars. "An opportunity to experience Timon of Athens in a smartly revised version that's staged and performed with unusual distinction. It's worth the trip to Brooklyn."
Read more

4/5 Stars. "Shakespeare's rarely produced tale of a big-hearted spendthrift gets a powerful production with a first-rate female Timon."
Read more

"Very entertaining both in its visual spectacle and high style. The play may not be up to Shakespeare's usual standard of poetry and psychology, but director Simon Godwin has shown how to make it work for a modern audience. Kudos to all involved in this revelatory production."
Read more

"It comes as no surprise that [Simon] Godwin [has] done it again, taking the very seldom performed...'Timon of Athens,' making a few minor tweaks, and creating a powerful, entertaining play. "
Read more