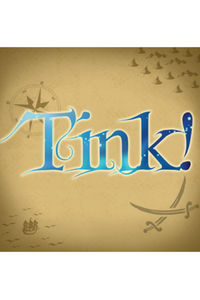 Part of the New York Musical Festival: This new tuner is about a famous little fairy with a big story of her own.

In a time before time was important, there was an island full of music and magic, where pirates, natives, fairies, and other mysterious folk lived, loved, and fought together until one young fairy and one young pirate crossed paths. When first mate James of the Jolly Roger meets the yearning, idealistic young fairy Tinkerbell, their star-crossed romance brings together the entire population of Neverland, from the mischievous Dream Weaver fairies to the mighty Natives, and even a colony of scavenging boys whose leader fell from the sky.

See it if You have kids--you'll like it too. I see this going to B'way because it has something for everyone in the familiar Peter Pan setting.

Don't see it if You have already overdosed on the entire Peter Pan thing.

See it if You're a fan of Peter Pan, and want a retelling of it with some fantastic music, colorful costumes, and impressive dancing.

Don't see it if Your main reason for seeing it is Captain Hook - the actor playing him falls completely flat.

See it if you like Tinkerbell or shows that take familiar characters beyond what you know.

Don't see it if you don't like Tinkerbell, Peter Pan or shows that take characters beyond what you know or if you don't enjoy fantasy

See it if you are looking for a fun show with a pop score based on classic characters. A show that parents can enjoy watching along with their family.

Don't see it if you are turned off by Peter Pan stories.

See it if Enjoy watching a touching script with a beautiful score and sharply crafted musical staging with lots of action.

Don't see it if You're not interested in musical theatre with strong actors, clever writing, and elaborate choreography.

See it if Tinkerbell without Peter Pan done so well you wonder what took so long for someone to do it. Loved the two leads. One of NYMFs best.

Don't see it if You have no heart and you don't like family shows like Matilda and Peter and the Starcatcher.

See it if you love Peter Pan based shows.

Don't see it if you want a complex story.

“Nominally, the show is a prequel about the mischievous fairy Tinker Bell, but she is overshadowed by the dashing James, a pirate with an uncanny ability to prance around in tight pants...The show targets a young audience, but often comes across like an involuntary satire of contemporary entitled children...What you may remember most from the show is not Lena Gabrielle and Greg Kerestan’s humdrum, synthesizer-heavy score, but the flashy visuals.”
Read more

“Not only a delightfully imagined tale about Peter Pan's twinkling friend Tinkerbell, it's also one of the most musically satisfying works at the festival this year. Hopefully it's also one that finds its way to a commercial venue...Under Rachel Klein's direction, the actors show off their dancing and vocal chops to great effect in energetic numbers...With a little tinkering to the story and some smoothing out of the occasionally stiff choreography, this show looks poised to fly.”
Read more

"Melodic and energetic numbers flood the song stack…They're the aural embodiment of in-the-moment fun…But the line between 'magical' and 'workmanlike' is unsettlingly thin here, and the show ends up playing like a cynical, even desperate, ploy for attention…Noble plays Tink to the hilt, with a bright, smile-making belt voice and no shortage of spunk…If hers is a story that needs to be told, 'Tink!' doesn't prove it—but it's good enough to send you back to the original."
Read more

"The book strips this lovable character of any charm or enchantment…The attempt to parallel socio-economic issues of modern day is heavy-handed…The broad direction of Ms. Klein manages to serve the material but creates arrogant caricatures in lieu of impressionable fictional characters. The cast is top-rate...Although the concept seems like interesting material for a musical, perhaps it is better left as a fleeting thought...'Peter Pan' is a tough act to follow."
Read more

"'Tink!,' wants to be the 'Peter Pan' version of 'Wicked' and fails miserably. It’s not that it’s bad; worse, it's mediocre...This is a show completely devoid of magic…The over-direction by Ms. Klein consists of pushing boxes all over the stage without making sure her actors had clear-cut layered performances. She allows them to overact, mug and the script to by mangled…The show is perfect community theatre, but as for more, it needs more fairy dust."
Read more

"'Tink' had all the makings of a kids' show yet there was a plethora of adult themes…There are flashy kid production numbers and then Broadway pop songs that live in a different musical…No matter how cute 'Tink' is, it desperately needed to be trimmed…'Tink' was an overly ambitious production...It was colorful. And it was way too much…This cast was buoyant and full of spirit. They had fun despite the madness of the musical…Right now, this candy-coated musical will just leave you with a cavity."
Read more

"The new family-friendly musical bursts with magic and mystery, adventure and romance, with a colorful design, captivating score, and spirited choreography that hold appeal for all ages…The show’s thoroughly engaging music ranges from heartfelt solo ballads to full-company blockbusters with strong vocals and harmonies from the entire cast…The ambitious movement is spectacular and exhilarating, though the execution is, at present, a bit shaky at times."
Read more