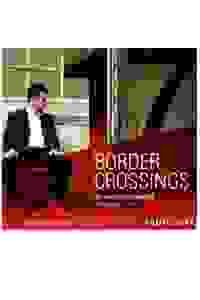 Part of the 2015 Next Wave Festival, this solo show features director, designer and raconteur Thaddeus Phillips as he takes a trip around the world through story, armed with a chair, a table, and a bar of lights.

The itinerary: a worse-for-wear Communist-era train traveling from Prague to Belgrade; the wheel well of a transatlantic jet to Heathrow; and 15 other border crossings recreated by theater director, designer, and raconteur Thaddeus Phillips. A chair, table, and bar of lights become the imagined settings for invasive body searches at Charles de Gaulle, ayahuasca experiments in the Amazon, KFC-smuggling in Palestine, and run-ins with Ace of Base on Croatian ferries in this engrossing look at the perplexing ins and outs of our fragile right of passage.

See it if You enjoy stories about our current immigration system and those of other countries in the recent past. You like performance art.

Don't see it if You don’t like one actor performances. You are wanting to see a stand up comedian, this is far from comedic.

See it if A one-man show by a very entertaining man. It details several of the border crossings he has made. Fascinating stuff.

Don't see it if If you don’t like one-man shows or have no interest in what goes on in the rest of the world.

See it if This one-man show is nothing short of remarkable. Thaddeus Phillips paints a picture and recreates the borders he has crossed over time.

Don't see it if don't like solo shows, don't want your imagination to take you someplace else. Can't make quick transitions. Read more

See it if A dizzying world tour in ninety minutes.

Don't see it if You hate the minimalism of one man shows and their sets. Read more

See it if you'd like a one-man comedy show with great props; if you travel a lot

Don't see it if You only like fully sketched out plays with complete story arch and a full cast. This is a very funny one-man show

See it if You care about being a global citizen, and don't mind a show that might overstate in the end.

Don't see it if you don't like one-person shows.

See it if you like to travel and have some experiences of it.

"The set is deceptively simple: just a table, a chair, a lamp. But the director, Tatiana Mallarino, has an agreeably inventive approach to staging. Those items are repurposed in a dozen different ways. If the staging compels, as do several of the tales, the text itself doesn’t. The storytelling is efficient, but prosaic. And while Mr. Phillips, who has an air of both seriousness and mischief, is a likable performer, he isn’t so scintillating as to enliven the prose fully."
Read more

"We armchair travelers participate in the discoveries that virtual travel affords. Even as Phillips’s fancy footwork throughout his rich space-and-time travel extravaganza entertains, we may learn something too, beyond the abuses of officialdom and the acquisition of some foreign words."
Read more

"Thaddeus Phillips's brilliant piece, '17 Border Crossings,' is a series of monologues based on his own extensive travels. Some of these stories last only a few seconds and some are longer; some are funny, others frightening or sad. They carry implications that go to the heart of what it means to be a human being living among other humans."
Read more

"There are plenty of poetic moments...Phillips is a compassionate, gifted storyteller with a very fine ear for how people speak their truths. A riff by a Mexican immigrant on why he likes the world 'alien' is a thing of simple beauty."
Read more

"This multi-talented theater wizard renders his own international travel as the subject of this work. By framing his monologues on border crossings, he assembles a mix of experiences from which he can draw humor and as well as make his political critiques. Although his humor and political critique don't always sustain interest, many segments do."
Read more