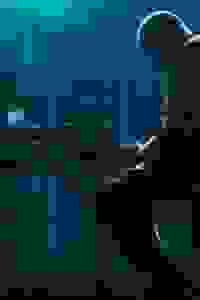 View in admin
A Human Being Died That Night
NYC: Brooklyn
84
Score it Scored!

A Human Being Died That Night NYC Reviews and Tickets

A white male assassin for the apartheid state is visited in prison by a black female psychologist. Critically acclaimed in South Africa and the UK, this powerful production has its US premiere at BAM.

Prime Evil is what South Africans call him. In Nicholas Wright’s play, based on the best-selling 2003 book by Pumla Gobodo-Madikizela, Eugene de Kock is visited in his prison cell by a black female psychologist to discern man from government-sanctioned monster. In an interrogation that moves from dispassionate to deeply intimate, a remorseful de Kock and his interlocutor negotiate a fraught emotional space in which fear and compassion coexist.

See it if you want a play that causes you to think about race relations and history. It is wonderfully acted with a sparse but effective set.

Don't see it if you don't like plays based on history. Or travelling to Brooklyn.

See it if A little bit of drama

Don't see it if Sad about the plot

See it if you have an interest in major crime

Don't see it if you can't handle hearing victims recall or facing the reality of mass murder.

See it if You are looking for some reflective theater...

Don't see it if You are uncomfortable with heavy themes

"Quietly gripping and superbly acted drama...'A Human Being Died That Night' is dense with details about the violent chaos that marked the final years of apartheid. It can at times feel like a dramatized history lesson. The central theme, the mystery of the banality of evil, has been delved into many times before...But even the occasional awkward passage doesn’t detract from the emotional impact. "
Read more

"Enormously compelling...In light of the play’s importance, and its gripping story, it is barely relevant that as dramatic literature it feels slightly undernourished. In compressing the years of interviews, Wright has imposed a dramatic arc that fits a bit lumpily over the contours of the material. There are a few too many lines like 'the difference between good and evil is only paper thin,' and surprisingly little psychology for a play about a psychologist."
Read more

"Some of the best scenes, like the description of a bombing and an anecdote about headphones rigged to explode, are as suspenseful as mini-thrillers — which is saying something since the show consists of two people conversing around a table...The show isn’t about settling scores. Wright and director Jonathan Munby explore truth-digging as a necessary step on the way to national reconciliation, and you can see their point in the grand scheme of things."
Read more

"Some of the best political theater on earth is currently being written and produced in South Africa. 'A Human Being Died That Night' tackles the radioactive subject of apartheid-era counterinsurgency policeman Eugene de Kock, whose campaign of violence against antiapartheid activists earned him the nickname 'Prime Evil.' The play is simultaneously astute and emotional, without devolving into sentimentality. That turns out to be an ideal mix for examining a fraught subject like this one."
Read more

"A gripping post-apartheid drama...The play has a running time of 80 minutes but in that tiny slice of time you can truly see the unfolding of five years of what I dare to call an intimate relationship play out."
Read more

"'A Human Being Died That Night,' under the direction of Jonathan Munby, offers a rare, perfect theatrical experience...His manipulation of the rhythms of the play is flawless. The 80-minute running time goes by so quickly and the experience is so immersive that emerging from the theatre into the real world feels almost like a transgression in itself. Munby's work is that of a consummate artist. The performances are electric...Provocative, intelligent and cathartic."
Read more

"The pace is fast and proceedings interesting to watch, in spite of the fact that you are essentially looking at two people sitting and talking for over an hour, one of them literally chained to his seat. It’s a tense, pared-back piece of drama, and although it sometimes demands of its audience a more in-depth knowledge of South African history, the themes are universal."
Read more