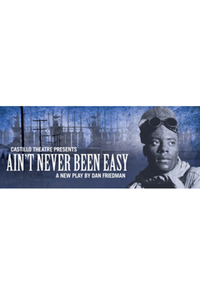 Castillo Theatre presents a new play about African Americans in the 1930s who embraced communism as a means to address social, racial, and economic injustice.

Over many decades, Black America has searched for paths to liberation, freedom, and equality. That search has led in many directions, and to this day remains unfinished. During the 1930s, a significant number of black leaders, including W.E.B. Du Bois, Harry Haywood, and Paul Robeson, turned to communism for possible salvation. African Americans in places like Birmingham, Alabama followed suit. 'Ain’t Never Been Easy' tells their story.

70
Well-intentioned, but dull, Slow, but an interesting premise, The actors were earnest, but the script didn't have much.

See it if learn some American history, or just want to support All Stars Project. The show had its moments; the director used odd space pretty well.

Don't see it if Not interested in black social themes and events.

See it if you are interested in the history of blacks and communist politics in Alabama during the early 1900.

Don't see it if you are looking for a polished play or do not care for different political views or the early history of blacks in the south.

Don't see it if you don't enjoy historical plays

See it if you'd like to learn a little about communisms appeal to southern blacks.

Don't see it if an educational play is banal and doesn't live up to its references in its description. Also, very poorly staged

See it if For those who are concerned about the struggles of Black people when things were obscenely racist.The connection with the communist party.

Don't see it if You wan't to bury your head in the sand about people's struggles for dignity and equality.

See it if you'd like to learn more about the complexities of race and class struggle within the history of America.

Don't see it if you're afraid to confront themes of racism and prejudice that are still resonant today. The play is good, though a bit dialectical.

See it if The actors were animated! The energy is contagious!

Don't see it if You are hoping to see a complex production.