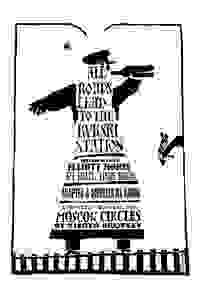 View in admin
All Roads Lead to the Kurski Station (HERE)
NYC: Soho/Tribeca
53
Score it Scored!

In this loose adaptation of the first postmodern Russian novel by Venedik Yerofeyev, poet-drunkard Vienya traverses Moscow in an attempt to catch a train to visit his beloved in the distant suburb of Petuskhi.

Along the way, he is haunted by fantastic visions, and two mysterious women, seemingly determined to frustrate his plans. In the tradition of anti-theater and the works The Living Theater, Bread and Puppet, and Grotowski, "All Roads" rejects naturalistic forms of storytelling. Instead, a sequence of maniacal fever dreams explore Soviet life through the lens of Vienya’s troubled mind. The show was produced in a developmental run last spring.

See it if you want a taste of Russian literature that presents a drunken-dreamlike state with young actors giving it their all with good light/sound.

Don't see it if you want a thoroughly enjoyable story - this is a different, at times loud, in-your-face type of theater that is not everyone's cup of tea.

See it if you are interested in how one company channels the Eastern European theater avant-garde of the 1960s & 1970s for a new century.

Don't see it if you are expecting a dramatic plot, or even a memorable assemblage of stage pictures. Read more

See it if Don't; needs too much work. More than just desire is needed to create political theatre of any kind. This may aspire but as is is nonsense.

Don't see it if You're a fan of Tadeusz Kantor, Jerzy Grotowski or Polish theatre in general; this effort doesn't come remotely close, even in spirit. Read more

See it if you've never experienced inventive experimental avant-garde theater. It's def not for everyone, but worth stepping out of the box for it.

Don't see it if you expect a clear str8-forward linear story. Do your homework. This is str8-forward over-the-topness in full-force, full speed ahead. Read more

See it if you really, REALLY like avant garde/experimental theatre

See it if You love avant garde, experimental theater.

Don't see it if You get bored easily and are not very interested in politics. Out of the way theater which rarely satisfies. Read more

See it if You're in the mood for a mind stretching nonlinear trip through the mind body and spirit of a Russian everyman seeking life's meaning.

Don't see it if You cannot tolerate being suspended for a little over an hour in a state of very compelling but opaque theatrical incantations. Stunning.

See it if You want to see a take on contemporary political Avant Garde theater.

Don't see it if you want a linear story with cohesive plot lines.

"'All Roads Lead to the Kurski Station' could serve as a cautionary tale about alcohol abuse and is at its best when it plays with Vienya’s, and Russia’s, impressive alcohol use...Morse is excellent as the scared, drunk Vienya, moving in and out of lucidity and with a physical life that is natural, yet large enough for the stage...Directorially Varda could have played with Vallet and Duggan’s differences...The piece lacks a necessary primalness that would allow us to witness the play emotionally."
Read more

"The 70 minute performance takes us on a wild romp through the underbelly of Soviet-Russian life with all its horror and absurdities—the laughter gets stuck in our craw...Varda created a compact script that contains the rich dark tapestry of Soviet life as Erofeev wove it from the tatters of all-too human existence...all mixed with a keen sense of absurd humor and irony...The verbal and physical dexterity of the three actors...brings the dense text to life."
Read more

"The poetic origins of the play were greatly felt throughout in both the language and the atmosphere the show created. I found myself locked on to every word that was spoken because I did not want to miss the next existential question thrown at me...The show lived in a sort of purgatory between a dream and reality...A surreal yet beautiful experience...A show that comes out of truth and how we all desire that in the world and in ourselves."
Read more

“This absorbing play is a throwback to the great days of Communist era unofficial theater...I loved the weirdness, I felt transported to a blackbox theater in Russia or Poland. I liked being there for 70 minutes. There's also a masterful comic impression of our contemporary populist leader that flows like satiric acid through the mouth of Elliot Morse. He stuns in his flexibility as an actor as does his chorus. This is a dramatic dark comedy I won't easily forget.”
Read more