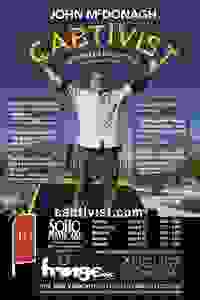 Part of FringeNYC: A comedic glimpse into 35 years behind the wheel of a NYC yellow taxi, and the political activism and reality show antics that followed. Multimedia storytelling in the finest Irish tradition with a New York City edge - laugh until you cry.

FROM THE ARTIST:
Cabtivist is a funny, pithy social commentary told from behind the wheel of New York's most recognizable cab driver. McDonagh, veteran WBAI personality and host of Radio Free Eireann and Talk Back We and Thee with Malachy McCourt and NY Times reporter Corey Kilgannon, has condensed thirty plus years of activism and observation into an hour and twenty minutes of side splitting comedy and heart-rendering social commentary. From the plight of the NY city homeless to the crazy demands of Upper East Side matrons, McDonagh brings the audience from laughter to tears and back again in the blink of a New York minute.Throw in his tales of brushes with the rich and famous while driving Stephen Fry to a Queens social club and teaching Top Gear's Richard Hammond how to drive a cab, and you have storytelling at it's finest. McDonagh, whose family hails from Pettigo and spends his downtime in Co. Donegal and the Boa Island in Co. Fermanagh, relates the hilarious story of how the Irish peace process cost him his shot at The Amazing Race.

See it if Interested in social activism and have a sense of humor. Try to sit up close because it's hard to see the video portion from the back.

Don't see it if You are offended by creative social activism.

See it if You are a New Yorker. You are an activist. Show was very funny with good videos.

Don't see it if You are a conservative racist

See it if you are fond of social engagement, storytelling and have a sense of humor

Don't see it if you don't get it

See it if You like a unique story with a political bite. Lots of fun!

Don't see it if You host a talk show on Fox News called The O'Reilly Factor.

Don't see it if You are a curmudgeon with no sense of humor, like to stay home and watch Fox news, hate New York City and yellow cabbies and eat cold Pizza

Don't see it if You hate enjoying yourself

See it if You have liberal political views and enjoy a bit of irreverence.

Don't see it if You are a political conservative

See it if You were born in the boroughs and you like to laugh.

“Those who remember what New York used to be will delight in following McDonagh’s tales...His natural stage presence and seamless storytelling make McDonagh a delight to watch...In ‘Cabtivist’, John McDonagh is a history of one, a last scion of a bygone age, and he looks back with fondness, frankness, and an infectious charm. ‘Cabtivist’ is a love song to the city that never sleeps, and who better to tell that story than a cab driver?”
Read more

“The Cabtivist holds his audience 'cabtive' as he regales with tales of cabbie adventures...McDonagh's standup is rife with outrageous tales, and he has pictures and videos to prove it. Blessed with the Irish gift of gab and disarming humor, he peppers his story with facts that are not necessarily widely known."
Read more

"If the goal of theater is to entertain and educate an audience, then McDonagh has undeniably fulfilled his duty. This is not so much a monologue in the spirit of, say, Spalding Gray, as it is a night at the pub sitting next to a good storyteller, sans the pub. A little more emotional depth, a little more structure in the script and a little more artistry in the performance could deliver 'Cabtivist' to greatness. But for now, McDonagh gets plenty of mileage from his well-polished gift of gab."
Read more

"McDonagh is an amusing storyteller, and he’s in prime form at the beginning of his hour-long monologue...Then we are off to the activist stories, and there are a couple of funny ones...McDonagh has a gift for finding the humor in any experience he’s had, but I would have preferred that 'Cabtivist' tell us more about his life as a cabbie, which is far less humdrum than the would-be celebrities we hear from every day."
Read more

"After listening to McDonagh’s hilarious reminiscences about his life as a NY cabbie, you’ll be convinced that few jobs are as rife with comic material...He recounts all of it with tongue-in-cheek humor, spot-on observations, and an engaging familiarity that will keep you in stitches...Directed by Simring with a fast-paced informal tone, the performance is part autobiography, part stand-up routine, part PowerPoint presentation, part Irish tradition of storytelling, and 100% entertaining."
Read more

“Like any good cabbie with some wear on the tires, John McDonagh can regale his theater-seat passengers with numerous brushes with the rich and the famous...Instead of focusing on the famous who have stepped into his cab, McDonagh focuses on his efforts to make the reverse journey - out of hackdom and into stardom, always with failed but hilarious results.”
Read more