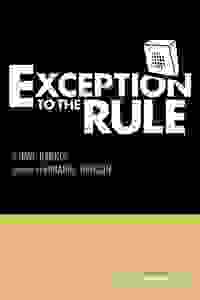 View in admin
Exception to the Rule
NYC: Midtown W
83
Score it Scored!

Exception to the Rule NYC Reviews and Tickets

A whip-smart comedy about six Black students stuck in a room at the worst high school in their city.

In this modern day 'Breakfast Club,' a group of Black students are trapped in Room 111, a class in the worst high school for miles. Amidst fights and flirtations, the students have to answer important questions: should they follow the rules and stay put, or find an escape? Are the walls keeping them in, or are stronger forces at play?

The play was supposed to premiere at Roundabout Underground in 2020 and be Harris's New York debut, but because of the pandemic postponement, 'Tambo & Bones' at Playwrights Horizons earlier this season ended up being his New York debut.

See it if you want to see a play that is part Breakfast Club, part Waiting for Godot, and part No Exit set in an underserved high school.

Don't see it if you are not interested in the work of new and upcoming writers. Dave Harris is someone to keep your eye on!

Don't see it if You are looking for a politically correct, safe play Read more

Don't see it if If we want a musical or light topic, then skip this one.

See it if no reason not to.

Don't see it if no reason not to. Read more

See it if Existentialism in the inner city detention hall. Strong cast.

Don't see it if Nearly sidesteps clichés and stereotypes

See it if you want good acting in a show that's a cross between WAITING FOR GODOT & THE BREAKFAST CLUB.

Don't see it if you don't want to see once more that All white people should be shamed. Or see a Black person be called for not being "Black enough".

See it if It’s like “The Breakfast Club” meets “Waiting for Godot”, but, black. 6 talented young POC actors, stuck in detention with relatable topics.

Don't see it if There is some humor, with raw emotions, as well. There is some music, smoking 🚬, and lots of N-word usage, which actually comes up. I am Read more

"What happens once we can see people for who they are and then dig deeper into their contradictions? Understanding how lives are shaped by their limitations, as Harris details here with an ultimately pat sort of logic, is foundational to social justice. But in order to see that there’s more to people than what keeps them in margins, first we may have to set them free."
Read more

"The play lasts around 90 minutes, but it still only feels like the beginning of something — it ends on an interrogative uplift, which leaves vague what could be sharp. ... We never feel the full force of Harris’s analysis coming to bear because he asks them only once."
Read more

"High-school detention has no business being as entertaining as it is in 'Exception to the Rule,' a terrifically funny and subtly potent new play by Dave Harris."
Read more

"'Exception to the Rule' aims to provoke thought and reflection in more indirect ways. Whether you find Harris's social allegory in this work intriguingly thorny and complex or merely heavy-handed will depend on your personal experiences. My own reaction rarely rose beyond a certain sociological and aesthetic detachment, but I found the broader societal implications fascinating to contemplate in retrospect."
Read more

"I found the last fifteen or twenty minutes of 'Exception to the Rule' as disheartening as they are sobering. Certainly, Erika and the other characters in this play face obstacles that many of us could never dream of, and Harris has written a thoughtful—and entertaining—testament to them. Still, I would have preferred to leave the theater with a little more fodder for hope."
Read more

"Set in its own dreamscape à la Twilight Zone, the play is pure humor and heartfelt. These engaging young people exude charm, aspirations and dreams but seem trapped as detentionees with few prospects."
Read more

Dave Harris’ play won me over right away, because of its hilariously spot-on depiction of adolescent bravado, restlessness, insularity and resentment… Even as we understand that the play is meant as a race-conscious metaphor, each character is distinctively and believably etched, helped immeasurably by the first-rate cast,
Read more

"Harris addresses issues specific to African-American youth here, but since this playwright is the real thing, an artist, he also speaks to a broader audience. We’re all set on a specific track early in life. How much choice does anyone really have?"
Read more