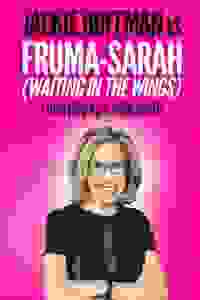 View in admin
Fruma-Sarah (Waiting in the Wings)
NYC: Chelsea
82
Score it Scored!

Fruma-Sarah (Waiting in the Wings) NYC Reviews and Tickets

An aging community theatre actor waits to go on in a production of "Fiddler." Jackie Hoffman stars.

Ariana Russo sits backstage, waiting to go on as Fruma-Sarah, tethered to the fly-system overhead. As she prepares to navigate her hour-long exile ahead, the wait begins to wear, exposing deep cracks in Ariana's facade.

Following her most recent turn as Yente in the Yiddish-language adaptation of Fiddler on the Roof, Jackie Hoffman returns to the stage -- backstage -- while a production of Fiddler plays out onstage in real time.

See it if Good acting. If you like Fiddler you will enjoy this.

Don't see it if Very uncomfortable seating. Can be slow at times and a little boring.

See it if you miss theatre and are fans of FIDDLER ON THE ROOF and Ms Hoffman.

Don't see it if you're not in the mood for more dialogue than action. And don't want to deal with a pacing issue if you know FIDDLER very well.

See it if you missed live theatre! There were some really funny moments. Jackie Hoffman is fantastic as always. If you love Fiddler you’ll like it!

Don't see it if You need a lot of action. The play dragged at times and the seats were very uncomfortable.

See it if A great star performance by Jackie Hoffman, an interesting plot.

Don't see it if dont understand theater humor/fiddler. the seats are very uncomfortable.

See it if You grew up in community theatre and appreciate the trope.

Don't see it if You cannot sit through an hour of fluff to get to the meat of a play.

See it if if you like dark, bitter humor

Don't see it if you need action. An actress waits to make her entrance for Fiddler & she is talking to a new friend backstage. In real time.

See it if you LOVE Jackie Hoffman. This is Jackie at her best!

Don't see it if you are expecting lavish sets and high tech. This is a small 2 person show that is hilarious.

See it if Jackie Hoffman was great

Don't see it if Very cliched

"The actress Jackie Hoffman doesn’t so much steal scenes as first beat them up and then abscond with any valuables...Are the jokes cheap? They seem heavily discounted...She treats the material with absolute seriousness, dignifying the bits that don’t deserve it, swerving into an emotionalism that the script doesn’t remotely earn."
Read more

"'Fruma-Sarah' doesn’t go deep; its comedy is familiar, its brief flirtation with tragedy is unconvincing, and Margo has little to do beyond serve as a sounding board. But if the part of Ariana is not always made of first-rate material, it suits Hoffman well and she wears it like skin."
Read more

"Hoffman, always great, delivers an impeccable, multi-layered performance as the bravado-filled, downtrodden Ariana, one that's as hilarious as it is devastating...And it would be so much better if the play, which is, at best, a 10-minute sketch expanded into 80 interminable minutes, was up to the standard that Jackie Hoffman sets. But Smith seems destined to make fun of the Arianas at every single turn."
Read more

"'Fruma-Sarah (Waiting in the Wings)' is built on a foundation of tropes, truisms, and in-jokes about the world of community theater. As such, it is likely to find a long and happy life among amateur companies across the country where productions of Fiddler abound and Fruma-Sarahs wait interminably in the wings. For now, however, it serves as a glorious forum for Jackie Hoffman, whose performance, under Braden M. Burns's direction, brings her character resoundingly to life."
Read more

"Smith turns out to be quite accomplished at keeping an audience ahead of him in one way and continually engaged in another...Smith is particularly smart on Margo, giving her some troubles of her own and allowing her to work them out a bit...Nevertheless, 'Fruma-Sarah,' crisply directed by Braden M Burns, remains Jackie Hoffman’s vehicle."
Read more

"Fruma-Sarah could easily have become a vehicle for Hoffman’s boisterous talents. Instead, Burns clearly understands that this is very much a play and not an act...After a number of profane outbursts Fruma-Sarah takes a melodramatic turn near the end, a twist that the playwright rightly moves past quickly saving the play from bathos."
Read more

"Listening to Hoffman recite her stream of consciousness dialogue is impressive. She’s witty and wry and the best in these situations. But you tend to glaze over as the flow of comedy suddenly takes a heavy duty turn and actually becomes too serious and a downer."
Read more

"The best parts of the play are when Hoffman can be outrageous. When she does her vocalization exercises, she’s hysterical...The show is uneven and basically unsatisfying. It’s about theater, loneliness and unhappy people, but it's hard to care about Ariana."
Read more