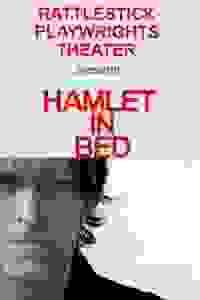 Rattlestick Playwrights Theater presents a twisty and darkly comic story about mothers and sons: a neurotic actor tracks down a woman who may be his real mother.

Michael is a neurotic actor and adoptee obsessed with two things - finding his real mother, and playing the famous Gloomy Dane. His twin fixations collide when he tracks down Anna, a reclusive former actress-turned-barfly. Gripped by the notion that she might be his actual birth-mother, he first stalks her from a distance, then lures her into a noirish production of Hamlet playing the role of the queen, his mother. 'Hamlet in Bed' is a darkly comic and poignant story about mothers and sons, about what it means to live a life in the theatre, both a generation ago and now, and about families - the ones we’re born into, and the ones we find along the way.

See it if you are fascinated by actors. This psychological drama about Hamlet and Gertrude is ambitious, but doesn't fully deliver.

Don't see it if you get restless. I found myself nodding off.

See it if you are a fan of either actor.

Don't see it if you easily tire of monologues.

Don't see it if Dislike the above

See it if you're a Hamlet fan and want to see a more modern take. Two actors; male outshone the woman. If LONG monologues and shouting are your thing.

Don't see it if the smell of those herbal cigarette things bothers you (it's intense). if you don't want experimental theater. not a must-see at all.

See it if you want to see a modern take on Hamlet that illuminates the text. Two-hander with great leads. A vision of a fictional disreputable NYC.

Don't see it if you can't go along with a lot of self-indulgence from the actor-playwright. I found it amusing. Others might find it pretentious.

See it if love Hamlet in any form and are intrigued by the many interpretations. If you are willing to extend your thinking about Hamlet. Fresh look.

Don't see it if a traditionalist in regards to Shakespeare, if you want only the sacred text.

See it if you want to see some refreshing experimental theatre with a small cast and a phenomenal male lead. Plus, the production quality is amazing.

Don't see it if you want something light. The show is dark and often heavy. The female lead is a little weak and has been done before--I blame the script.

See it if You enjoy solid acting and uncomfortable story-line situations.

Don't see it if You are looking for traditional theatre. This is odd, and special.

"In its anatomizing of the psychodynamics of the rehearsal room, the play bears a resemblance to David Ives’s 'Venus in Fur.' It’s not, unfortunately, quite as entertaining. It is, however, suspenseful enough to sustain our interest...Both actors give strong performances."
Read more

"Laurence gets a startling amount of mileage out of this soapy premise thanks to the show's off-kilter style, Lisa Peterson's modulated direction, transformative lighting and, indispensably, the electrifying Annette O’Toole. Though the play is ostensibly Michael's story, 'Hamlet in Bed' emerges as Anna's play."
Read more

"'Hamlet in Bed' is clever and creepy and Laurence makes a charismatic nutjob. (O’Toole is also strong as the could-be mother.) The portions of narration written in verse are surprisingly solid...But the fascination of the cross-references pretty quickly pales, perhaps especially in Lisa Peterson’s stylishly noir production, leaving you with nothing but the obsession to hang on to. That’s insufficient...Even at only 90 minutes I began to feel I was trapped in someone’s scream-therapy session."
Read more

"Despite its provocative if not exactly credible premise, the play doesn't succeed in making its disparate themes coalesce. Its strangeness is only emphasized by the varying theatrical styles employed...Laurence delivers a performance intense enough...But it's O'Toole, still sizzlingly sexy at 62, who's the standout here."
Read more

"In the end, the play’s the thing. And despite some poetic passages, this one feels like a self-indulgent acting exercise...Lisa Peterson’s staging is aptly shadowy. Laurence does morose and angst like nobody’s business. O’Toole is gritty and touching. Despite that, 'Hamlet' grows wearying. Get thee to a Sleepy’s."
Read more

"Under Lisa Peterson's direction, both Laurence and O'Toole deliver extremely fascinating performances that are the polar opposite of each other...Peterson's creative team complements the unnerving tone established early on...The full scenes themselves are much stronger overall, and it's lovely to watch Laurence and O'Toole sink their teeth into the compelling characters he has created."
Read more

"Director Lisa Peterson has crafted a wonderfully bleak and tense production from Laurence's improbable psychological drama. The 90-minute two-hander is packed with some striking visuals and terrific acting, but the text itself fails to generate enough heat to match its attention-grabbing premise...By the time Michael quips to the audience that his misuse of a word was a 'Freudian slip, like this whole play,' you may be ready to agree with him."
Read more

"There's a powerful, if contrived, idea at the center of 'Hamlet in Bed,' but, until it finally explodes in a blistering dramatic confrontation, it resides too firmly in the separate echo chambers of its protagonists' miseries. Anna and Michael are a pair of case studies, their interest more clinical than compelling. As Gertrude herself notes in Hamlet, what is wanted is more matter, less art."
Read more