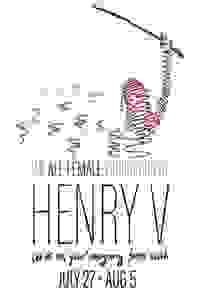 Hamlet Isn’t Dead’s all-female production of Shakespeare's complex, swashbuckling history play tackles the pursuit of glory, the pleasure of humor, and even a little French romance.

Following the death of his father, King Henry V ascends to the throne of England and soon makes a claim to parts of France based on distant ancestral ties. When the prince of France responds insultingly, Henry embarks upon a war with England's great rival.

See it if You want to support a young theatre company. You want to see non-traditional casting. You want a modern interpretation of a history play.

Don't see it if You don't want to see a significantly edited history. You want a uniformly, classically trained cast. You don't like small theatre spaces. Read more

See it if You like new visions of classic stories with a wonderful cast of women.

See it if You have a great need to see Henry V, enjoy seeing plays in an intimate setting

Don't see it if you are expecting a fully formed production.

85
You can have your trump caesar and your no-pants hamlet, this all-women production of henry v is the best and most enjoyable shakespeare play of the summer., Clever, Delightful, Entertaining, Refreshing

See it if You love the language of Shakespeare and are willing to listen intently and follow closely. These ladies deliver the goods.

Don't see it if You just don't "get" Shakespeare and don't want to. Or if you have some ridiculous retro objection to the all-female casting-it's amazing!

See it if You like Shakespeare; want to see a well done all female performance in a small bare bones room

Don't see it if You are not a Shakespeare fan; want to see older or mixed gender actors

See it if You want to see Shakespeare spoken quite well, but adapted poorly

See it if Megan Greener as Henry V is a delight - she captures Henry's charisma and pathos in a unique and powerful way.

Don't see it if The directing was effective for character work but at points it was hard to follow WHERE certain characters were and what they were doing.

See it if you want a refreshing, fun, all-female take on Henry V. You like an intimate show where actors interact with audience.

Don't see it if you prefer Shakespeare performed as is without being condensed or liberal use of French. First preview was unpolished in some scenes. Read more

"A riotous and nuanced 'Henry V'...Rightmyer offers one of the most intelligent cuts of the script I have ever seen...The cast works truly as an ensemble, so that it seems almost disingenuous to single any one actor out for her contribution to the whole...The St. Crispin Day's speech...is given new breath, new desperation, new hope and vitality in Greener's honest telling...One of the best productions of this play it has been my pleasure to attend. Highly recommended."
Read more